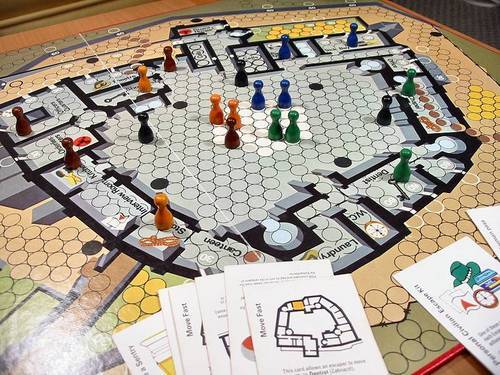 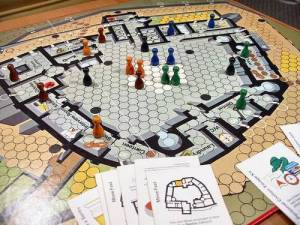 Escape from Colditz is a board game about the German castle that during World War II became a prisoner of war camp for prisoners who had already escaped at least once from some other camp. The idea of putting all the most clever and resourceful prisoners together in an old building riddled with hiding places and odd physical quirks was, arguably, not the brightest; those imprisoned found an astounding number of escape possibilities, and the whole story became the basis of a surprisingly strong British TV show. The board game doesn’t touch on the more complex issues here, but what it does accomplish is in its own way remarkable: a skillful pacing of events that creates a sense of growing narrative urgency.

There is one player who commands the German security forces; all other players (one or many) control nationalities of prisoner. The pawns move on a simplified map of the castle, with the prisoners trying to gather supplies (rope, wire cutters, forged passports) and the security forces trying to prevent them. At the beginning, the prisoners are mostly busy sneaking around on short missions to collect essential supplies from the inner rooms of the castle. As they do so, however, both sides are drawing cards that can be used for exciting events. The prisoners can draw opportunities to move quickly across the castle, pick up useful supplies for free, or gain access to one of the several tunnels; the security officers can draw cards permitting them to detect tunnels, shoot to kill, and otherwise thwart escapes.

The result of this mechanic is that narrative tension starts fairly low, but the stakes and the possibilities for surprise twists increase as time goes on. As a player, the trick is to position pieces so that they’ll be fully supplied and ready to run as soon as there’s a favorable dice roll. The longer you wait, though, the more likely that the German security player will have drawn cards allowing him to thwart you in colorful ways. Conversely, a second escape attempt right on the heels of a first means that the escaping player may have fewer resources, but the security officers may also be essentially tapped out.

As the game goes on, the stakes rise: more prisoners may be killed or locked in solitary confinement, meaning that each individual escape attempt that fails is a more serious blow to the prisoners’ overall chances.

Escape from Colditz was published in 1973 and is no longer commercially available, but it’s not too difficult to find used copies for sale through eBay or boardgamegeek.

7 thoughts on “Escape from Colditz as Procedurally Paced Narrative”