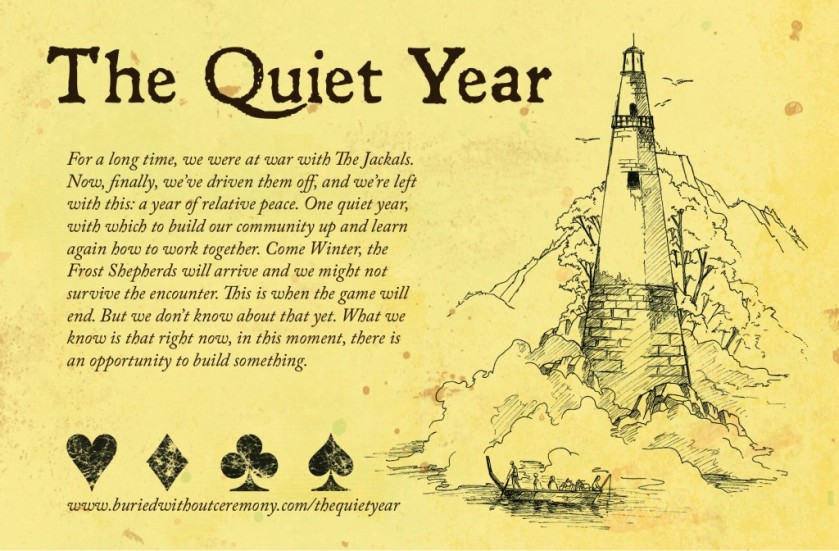 The Quiet Year is a story game about one year in the life of a threatened community. The War with the Jackals (not explained) is just over. The Frost Shepherds (also not explained) will turn up in a year, though the inhabitants of the town don’t know that.

In the meantime, there are up to 52 turns (one for each week of the year), and a deck of cards is used as a randomizer to determine what sorts of things might happen during those weeks. Each turn, a player draws the next card, follows instructions from a chart about what that card means for the community, and then takes one of three actions: proposing a communal discussion about a particular issue; discovering something new in or around the community (which means drawing it on the map); or starting a project (also drawn on the map, but set to conclude several turns later). By the time play is over and the last card is drawn, the map is large and complex and bears signs of many events that have happened to the community.

Our story told of a group divided by religious disagreements, threats from outsiders, limited resources (especially iron, which we didn’t have much of until late in the story), and a certain amount of archaeological curiosity.

The Quiet Year is even more aggressively Not About Characters than Microscope. Each player represents some faction or group within the community who wants certain things, but they’re not tied to a specific person or personality and are not even supposed to overtly communicate their faction concept, though there are ways to hint at it implicitly during gameplay. The “discussion” activities are the closest anyone ever comes to roleplaying an actual scene, but these are highly formalized and no individual human is represented there.

In our playthrough, the groups represented were, roughly speaking: superstitious peasants; a faction who wanted to do things the way we did back before the Empire fell (the apocalypse, for us, was something like the fall of the Roman Empire); a theistic religious faction who wanted to interpret everything as the will of a single God; and a ruthlessly unity-focused pragmatic faction who mainly wanted everyone to work together to save their communal skins — or else get out.

The map is a nice focusing feature, which at first reminded me of Microscope’s evolving timeline (and I really like games that leave you with an artifact at the end, as witness San Tilapian Studies). But in Microscope the timeline kind of is the story you’re building, while The Quiet Year’s map represents a story in some ways, but is neither the goal of the exercise nor a full representation of everything that happens.

Another way to put this: Microscope is a world-building game, almost, more than a story game, and the questions that you ask yourself while playing are the sorts of questions you ask while imagining what might happen in the history of an imagined world.

In The Quiet Year, by contrast, you’re not asking yourself map-building questions so much. We did have one or two pedantic conversations about the likely relative positions of water sources and rock types, but the game mechanics aren’t necessarily about thinking geographically and extrapolating from existing map features, and lots of things get drawn or represented on the map that aren’t really map features. Every event has to be recorded on the map somewhere, even the communal discussions, so this makes for lots of symbols, stick-figures, and conceptual representations. This made me wonder a bit: what game would be to a map the way Microscope is to a timeline? I suspect it would involve a lot more “what’s here? okay, why is it there? what was in that location before? what natural resource made it a good idea to put that object there?” and so on.

From there I went on to vague wondering about storygames that built out genealogies, or subway charts, or just about any other sort of systematic representation. When would this stop being storygaming and be something else? What if, instead of a chart, you were creating via game a divination deck, the Tarot of your shared world? Or a language? Storygaming conlangs?

Anyhow. TQY does have one other feature that I associate with Microscope, which is that you can end up with a lot of loose threads and unresolved possibilities. The end of the game comes randomly — the 52 cards are shuffled within suits, so you go through “spring”, all the hearts first, but without knowing whether the next heart will be the 7 or the Ace or what; then the diamonds, clubs, and spades, again with internal randomness. When the King of Spades comes up, wherever that is in the final quarter of the deck, the Frost Shepherds are arriving and the game is over.

This is lovely as a portrayal of cut threads and the arbitrariness of death. It’s maybe a little less lovely for structural cohesion, though.

Anyway, this sounds gripey, which is not a fair portrayal of my experience. I had a very enjoyable time playing TQY; but I also felt that a couple of my particular favorite storygaming experiences were not there. There weren’t any moments of major character change or discovery, because the game isn’t about that: not like you can have in Polaris or Monsterhearts or A Penny For My Thoughts. And it also doesn’t necessarily deliver a strong arc or a lot of causality.

Instead it’s — intentionally — rather chaotic, with lots of projects started and abandoned, lots of ideas pursued and left behind.