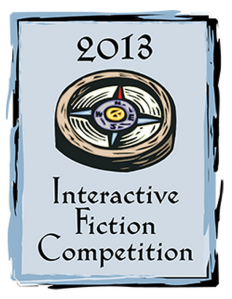 As usual this time of year, the annual IF competition (the 19th!) is now in progress, featuring both parser-based and choice-based works in a range of systems, including games in Inform, TADS, Twine, Quest, Undum, StoryNexus, and some other hand-rolled systems.

Games can be downloaded or played online here, and most do have some sort of online option. As usual, anyone who didn’t submit a game can judge as long as they rate at least five games. (Some of the games are pretty short, so this is unlikely to be a very onerous task.)

I will review as I have time. My usual rule is try to review every game that a) either has beta-testers or has a reasonable cause not to list them and b) can be played on my machine with reasonable efforts. I make no guarantees this year that I can actually do that: there are 35 games, and I have a lot of work and travel in the next month or two. But we’ll see. If you’d like to check out what other people are writing about the same games, this thread on the intfiction forum is meant to list some of the other bloggers who are also reviewing.

You may also like to review the games yourself; people who don’t have blogs or sites of their own often do this by posting comments to the intfiction forum.