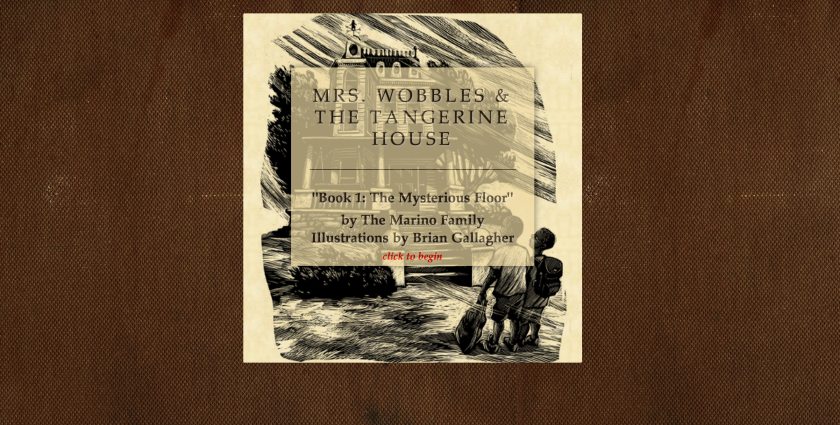 Mrs Wobbles & the Tangerine House is a choice-based children’s story executed in Undum. There’s a fair amount of text, so it may take some time to read through, though it’s not especially challenging. Review after the jump.

Mrs Wobbles is unabashedly aimed at kids, and tells a series of stories: first about how there chances to be such a thing as an interactive storybook in the first place, and then about the title character: an eccentric, possibly magic-using foster mother. The piece is incomplete in the sense that it promises there will be more stories, but the several stories it does tell are essentially finished as they stand. It’s very well polished, too: the Undum-based interface is slick and attractive, and there are a number of lovely illustrations that fit the flavor it’s going for.

The initial story, about how the book came to be, struck me as chiefly fanciful and a bit unnecessary. But the main story, about Mrs Wobbles, was quite resonant. It captures something of the silly play of childhood, and the imaginative bizarreness occasionally made me think of Roald Dahl. Other aspects of the story are quite serious and real. Mrs Wobbles is a foster mother not only to the viewpoint characters, but to a number of other kids, and the different children seem to cope in different ways with being in foster care. The book never enters into any expository speeches about how society handles its vulnerable members or how rough it might be to lose one’s parents, but its small genuine moments suggest their own conclusions. The final story I read in the sequence touches gently, seriously, but without sappiness, on death and loss as experienced by children.

The interactivity, too, is pitched towards the situation of reading a story aloud to a child. The choices are often about what you want to read next, or what you think happened, and they capture the give and take of child storytime pretty well.

So far as I can judge, this piece does a solid job of what it sets out to do. Children’s IF has been more and more common in recent years, as IF authors reach the age where more and more of them have families and thus young children to write to and for. But this is one of the better efforts in that line, I think, both for its accessibility and clean execution, and in terms of actually having something interesting to say.