I mentioned in my general ICIDS post that William Uricchio spoke about interactive documentaries: interactive story forms designed to convey information, sometimes by journalists to support news articles, sometimes as stand-alone long-form projects. He showed us his team’s project _docubase, a collection of (currently) 172 documentaries: these aren’t hosted at _docubase, but have catalog entries there, allowing the curious to link through and see the originals.

There was quite a lot in his keynote, and what follows isn’t so much a summary of that as a reflection on some of the specific tools and examples that he shared.

Tools: Uricchio pointed out the popularity of one called StoryMap designed for building a story around geographically-pegged words and images, and embed associated tweets, vines, Wikipedia excerpts, and YouTube videos. 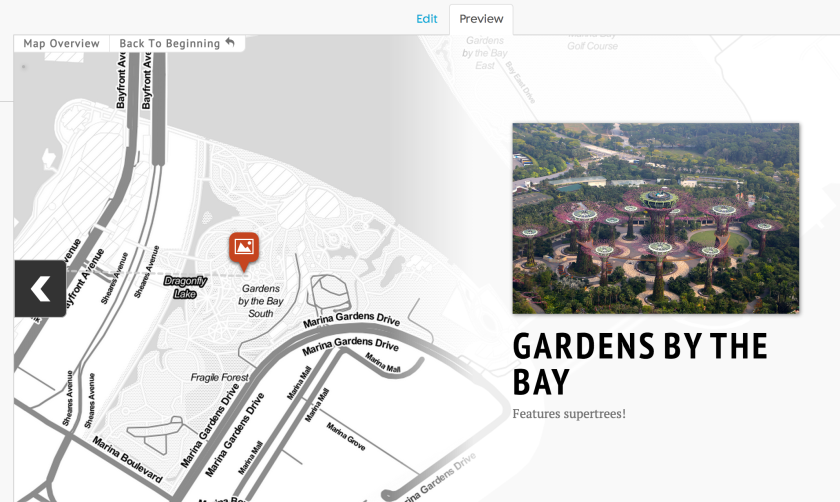 The image here shows the preview editing page, where I’ve just uploaded a photo from my trip, given it some captioning, and pegged it to a geographical location; StoryMap supplies the map itself and all the transition UI. My photo is GPS-stamped, but StoryMap didn’t pick up on that by itself — but that may be user error on my part, rather than an absent feature.

StoryMap reminded me also of BeeDocs’ Timeline, which I occasionally used for classes a few years ago; I actually also used it as a backstory tool and kept the history of Counterfeit Monkey in a Timeline application while the game was in development. I flirted with the idea of releasing that timeline later as a feelie for the game, but ultimately didn’t feel it added quite enough to be worth it. StoryMap feels a bit fuller-featured than that. But what I found striking is that both it and Timeline are designed to support a primarily linear user experience, with a clear sequence of steps to follow; you can view the map and even use it for navigation if you want, but the main thing this tool wants to do is provide a guided walk through a particular sequence, not very far off from Google’s auto story generator for your photographs.

Uricchio mentioned a number of individual projects, in particular Trash Track tells the story of a piece of garbage as it makes its way across the landscape and Fort McMoney is a multi-episode documentary on the Canadian oil rush. But he also noted that sometimes interactive documentaries show less use — and in particular less user retention — than one might hope: that people often engage with an interactive documentary just long enough to figure out how it works, and then move on to look at something else. 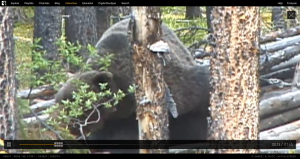 There are exceptions. Bear 71 tracks people’s contact with bears and the life of one particular bear in a Canadian park area. Uricchio cited this as one of the more successful interactive documentaries, perhaps because it provides information about how long the experience is expected to run and gives the user a clear understanding of what completion would mean.

Having been through Bear 71, I think there are a host of other reasons for its success beyond the clear countdown. The interface provides both direction and freedom. There’s a voiceover track that tells the main plot, which runs for the whole time and is skillfully constructed to give you all the information you need, but there’s also a juicily-responsive dynamic map on which you can watch the bear’s movement (and the movements of other animals, people, and vehicles) and select various objects to get a closer look at them.

For me this deftly solved some of the main anxieties that I feel when engaging with this kind of work: that I might miss some important information, that I might not be able to identify the point of diminishing rewards (I don’t want to keep poking an interactive system after I’ve already seen everything it has to offer), or that I might be under-engaged. The latter point is a little tricky to describe, but sometimes I’ve felt when playing with interactive maps and their ilk that this process of clicking on pictures to look at them was using up 100% of my active attention — it wasn’t really possible to split attention and do something else at the same time, the way I could split my attention from a TV show in order also to do a boring task, say — but that it wasn’t rewarding that attention with enough information to keep me interested.

With Bear 71 I felt assured that I would get all the story I wanted and know when it was supposed to stop, while at the same time enjoying the secondary activity of exploring the landscape as a kind of evocative counterpoint to what I was hearing. Sometimes I chose to investigate things related to the main storyline, and sometimes I poked around in odd corners. The game also, rather cleverly, tries to use your laptop camera to surveil you. I said no, but I got the point.

Really, I recommend this one: even if you don’t have a special interest in interactive non-fiction generally, it’s well worth a look. It’s easy to imagine interactive fictions told with an interface sort of like this one, particularly fictions that are about an individual’s experience within the setting of a larger explorable social domain. I’m not sure most hobbyists have the resources to make something this slick and beautiful, but… well, I found it inspiring.

In more or less total coincidence, while I was working on this post, I got some email from an unrelated source about another interactive documentary, a piece about Somali pirates called Last Hijack. Last Hijack presents a bunch of interview footage in video clips, but allows you either to explore those clips on your own, jumping around the timeline, or else (by default) it will select following one of four pre-fabricated paths. So this feels like another attempt to resolve the “how long should I spend/how do I find a coherent story” anxiety, and it’s certainly offering more freedom than the average StoryMap sample. But for me it’s still a bit less satisfying than Bear 71 because the directed and interactive aspects seem to be at odds with one another: either I can have a good curated experience or I can look into what I’m curious about, but not both at the same time.