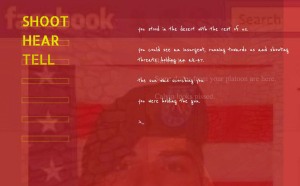 Aaron Reed’s contribution to the IF Demo Fair was introduced with the following description:

Exploring a frozen battlefield moment from a half dozen violently conflicting perspectives, this prototype (part of the author’s work towards a digital arts MFA) merges traditional IF with video, sound, and web conventions. Inspired by the currently unfolding trials of six US Marines accused of committing war crimes in Afghanistan, the project asks what interactive stories can say about contemporary, real-world events, and wonders if there can be such a thing as an IF documentary.

This should warn the player that what they’re in for is not going to be a happy fun romp. The piece — game is certainly the wrong word — is a series of short vignettes involving an ambiguous wartime shooting. It uses the strength of text to shift viewpoints in a way that graphics alone couldn’t: the same objects are described in different ways each time.

“what if im the bad guy” makes some of the heaviest and most successful use of multimedia I’ve ever seen in IF. The image with this post isn’t cover art. It’s a screenshot. It really might be fairest to say that this is a piece for which the IF parser and text output are a component, rather than that it’s IF with add-ons. All of the elements of the experience are essential. (I don’t know exactly what underlies all this technically. It may well be that the project is too complicated to be distributed effectively online and can only really be run as an exhibition piece.)

The text of “what if im the bad guy” hovers over photographs or, sometimes, a background video of a military video game, accompanied by sound effects. The effect is to create a sense of urgency and chaos opposed to the usual tranquility of turn-based IF play, and also to suggest the tension between imagined, game-play violence and the real thing. Meanwhile the important words in the text are not just highlighted as in Blue Lacuna: they actually wiggle on the screen, demanding attention and response. And the verbs in the upper left corner are the verbs you’ve learned at a given point in the game — starting with SHOOT, the only thing your character initially understands.

The effect is pretty disturbing. Progressing through the piece required, or seemed to require, typing racial epithets to refer to characters and commanding actions that I found extremely problematic. In this sense, the use of text and the parser intensified and clarified problems that a shooter game (like the one shown underlying the text) allows the player to ignore. The subjectivity of the descriptions forces the player to engage with the mindset behind violence, not merely with the tactical challenges.

But there also seemed (to me at least) to be more to it than a simple exercise in complicity-testing. This is a highly subjective response, but I had the feeling the piece was saying: look, if you want to understand this kind of human tragedy, you have to be willing to visit some pretty awful mindsets.

As it happened, I wasn’t willing. I don’t know how I would have reacted to the piece if I’d encountered it alone in a quiet room, but my discomfort was magnified many times over by trying to play in a public place. I kept wanting to look over my shoulder. I was acutely conscious that my playing was itself a performance that someone else might be observing, which made me even more unwilling to type what I needed to type in order to go forward.

Because of that experience, this is the piece whose thematic content (as opposed to form, design, gameplay, etc.) has stuck with me most from the fair. In particular, it’s made me think about the fact that our willingness to engage with those we find offensively wrong is also partly gated by our surroundings. If I listen to this person with some semblance of sympathy, does that send out the message to the people around me that I condone his attitude? If I don’t, am I ever going to understand him? How important is my understanding? (And given that “what if im the bad guy” is partly about gaining the verbs to communicate with other characters, these reactions seem to tie into the core questions of the work.)

I am sort of curious to see this piece again more fully, because I would be interested to know how it ended. At the same time, I’m not sure whether I’d just have the same reaction over again — where putting down the headphones and walking away from the laptop felt like a huge relief.