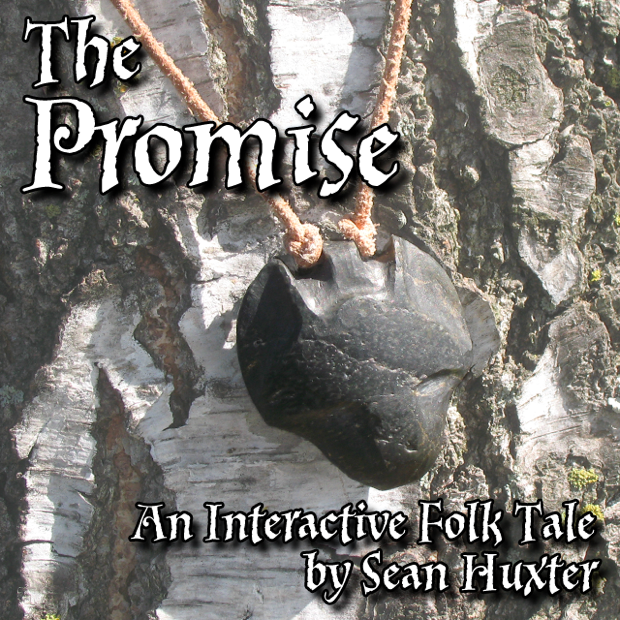 We continue with the reviews of games from Spring Thing 2011. Today’s is The Promise, by Sean Huxter.

Short summary: Simple fetch-quest mechanics and streamlined descriptions make for an easy-to-complete but not always very compelling fable about a child in a village under attack. The plot picks up in later stages of the game, but early portions can feel workmanlike. And I found the final message of the game suspect. Estimated time: 45-60 minutes.

I wasn’t crazy about the gameplay here, which almost entirely involved crossing the map over and over in order to retrieve objects for demanding adults. There weren’t really any puzzles, per se; it was more an exercise in doing what I was told, which is a little bit ironic given the coming-of-age, learning-to-fend-for-yourself themes of the fiction. In theory my character was learning interesting skills like glass-blowing, and getting a glimpse of how everyone in his village depended on everyone else. But this isn’t really a discovery for the player. Even when the town comes under attack and the player has to head off the map and make some choices for himself, the experience is too heavily guided for my tastes.

The moral of the piece turns out to be that you should keep a promise even if a Viking with an ax is about to kill you for doing so — after all, your father’s failure to keep his promise to a certain forest spirit-creature is what plunged your entire village into eternal winter. (In spite of which, no one in town seems to have considered moving.) Fables and ancient stories are full of this sort of point. Punishments for being forsworn. Terrible divine vengeance if you don’t do what you say you’re going to do. Bizarre reasons people are tricked into doing what they promised not to. Spirits doomed to stick around on Earth after death, trying to finish something left undone in life.

But in a universe where promises are frequently extracted and then ruthlessly enforced, I’m not sure the protagonist’s behavior is such a great example. I’d be more inclined to arrive at a different moral: Don’t make promises lightly. Maybe don’t make them at all.

Does that seem flippant? Let me unpack a bit.

The folkloric obsession with oaths and promises makes plenty of sense in context. In a society with weak government or none at all, people’s ability to make commitments to each other and then follow through on them is pretty much the sole basis of cooperation and alliance. In Greek mythology, the gods are often much more worried about oath-breaking than they are about mere rapes, thefts, and murders, because to take an oath was to invoke their interest as enforcers.

It’s in the context of that moral structure and that type of thinking that it makes sense to say, yes, if you promised never to come back to a certain place, you must never return there, even at the cost of your own life.

But, critically, in cultures that make a big deal of sacred oath-taking of that sort (at least the ones I’m aware of), there’s typically a clear distinction between big sworn Promises and day-to-day practical agreements. You don’t swear a big heavy by-the-waters-of-Styx, on-the-staff-of-Wotan oath that you’ll run to the market for fresh milk. That’s not what oaths are for.

The Promise deliberately mixes those two things together, by teaching the player a PROMISE mechanic that he has to apply to tasks at every level of gravity. In doing so, it strays out of the cultural context that would make sense of its ending.

Personally, I prefer a slightly less sweeping approach to morality of promises. Life is contingent. People are limited and have many claims on their loyalty. If you want to take your promises seriously, you’ll give them out thoughtfully and only on rare occasions.