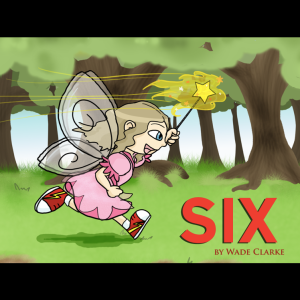 Six is a game about a children’s birthday party in Australia. It’s pitched for beginners (perhaps including children). I estimate one playthrough took me around 45 minutes.

Six is really beautifully implemented, with an over-the-top degree of polish reminiscent of last year’s Aotearoa. A great deal of care and effort has gone into the parser and hinting to make it accessible to novices. There’s a custom status line that lists exits and provides some orientation. Then there are extras: in-game art and sound, a charming hand-drawn map feelie, and a whole manual designed for newcomers to interactive fiction. The writing is uniformly on the simple side, so that it could be understood by kids, but it’s clear and engaging. Six goes out of its way on every occasion to explain syntax that might be puzzling, disambiguate naturally, and hint solutions to a puzzle you’re having trouble with. It’s just really really well done.

The huge emphasis on accessibility was a surprise to me, given that the author’s previous comp piece was the lavishly produced but retro-styled Leadlight, which needed to be run in a special emulator, understood only a short list of finicky commands, and punished the player with one surprise death after another. Then again, maybe that’s exactly why the author chose to do something different this time. Whatever the reason, kudos for the execution.

As for the premise, well, that’s a bit more limiting: you’re one of a pair of twins playing hide and seek at your birthday party. There are six friends for you to find, and catching each requires a bit of puzzle cleverness. This is not the material of high drama or deep conflict.

That said, though, the game really makes the most of what the premise does have to offer. The setting is a park, but it’s dense with landmarks, both the kitschy (a giant koala statue) and the evocative (hard-to-traverse configurations of Australian trees); and the descriptions do get across some of the wonder and delight I would have felt at this kind of landscape when I was a kid. So many hiding places and secret nooks!

The same care and attention holds over to the characters. Each of the NPCs has a distinctive personality and plenty to say, as well as the ability to move around in interesting ways either on their own or in response to the player’s interference. There’s even a tactical combat sequence, which is just complex enough to be interesting but, mercifully, lets you undo out of dead ends.

What really won me over, though, is that when you complete the game as Harriet, you unlock access to her sister Demi, and are free to play the game over from a different point of view, with different concerns and puzzles. Demi’s personality — less athletic, more clever — is a little more my style than Harriet’s, and playing as her opens up some of the secrets that the first playthrough didn’t explain. I could see this being a cool design for younger players who might enjoy two short play sessions better than one long one.

Overall, I might have preferred a game pitched a bit more for adults, but given what it is, I thought Six very charming and very well constructed. The simpler plot and easier vocabulary probably make it appropriate for an age group that might not quite be ready for Aotearoa or Mrs Pepper’s Nasty Secret.