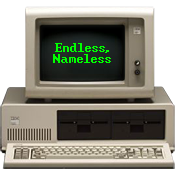 Endless, Nameless is Adam Cadre’s latest game. The surrounding text claims that it’s the relic of the bulletin board age, but anyone familiar with Adam’s oeuvre won’t be surprised to know there’s a bit more to it than a retro remake. There’s no way to write a substantive review without addressing the ways in which it takes a twist, though; it’s worth playing enough to find out just exactly how it’s going to be not what you think. So please consider giving it a try before reading on.

So, then. The game begins as a deliberately super-retro recreation of an early text adventure: cod fantasy that starts in a tavern, full of magic spells, incoherent worldbuilding and pointless anachronisms, easy to make unwinnable. There’s an inventory management system involving bulky encumbrances and a pocket that can hold lots of objects but doesn’t stash anything automatically. Trying to go through a door never auto-opens it, trying to open a door never auto-unlocks it, and if you want to manipulate anything you have to explicitly take it first. The whole ecosystem of implicit actions is gone, and you will miss it badly. There’s no conversation system, no giving or showing. There is randomized combat, though, and a hunger daemon (that mercifully doesn’t actually kill you), and a maze, and a big, pointlessly fiddly machine, of exactly the type that Adam has often complained about in games.

The trick is that the writing is good enough, and certain elements polished enough, that you know you are in competent hands anyway. This is no minor trick to pull off, but Adam achieves it.

The first time you die in this world — and it will likely not take that long — you are transported to another plane of existence. This plane is a vacation beach house implemented in excruciating detail (feel free to spend five turns examining carpet and wallpaper in the first room), but with significantly reduced potential. You can’t do anything dangerous. You can’t throw objects. You can’t kill yourself. You can talk to other characters. The implementation is now a parody of new-school IF, though, sadly, it looks like a not-very-good slice of life piece. In the new level, you meet other versions of yourself, other nameless adventurers who have previously tried your quest and given up. You can interact with them for a while. Some have hints about the retro game. When you’re ready, you return to the old-school game world and try again, using the knowledge you’ve gained.

Despite the sometime frustrations, the experience is really pretty good. The magic system is just about complicated enough to be interesting without being overwhelming. The spells are mostly named from verbs in Esperanto, for suitable almost-recognizability (with the exception of OVIDIO, which is presumably named for the author of the Metamorphoses). The Endless, Nameless spells are mostly a silly assortment, but, as in Graham Nelson’s Balances, they have a few cool interactions as well.

The inner game is unfair in various ways, not so much because solutions are really hard as because there are lots of ways to make things unwinnable, miss objects you had a narrow opportunity to acquire, to screw up a puzzle timing. Getting it all right will take many repetitions. But most of the time, the design hit just the right level of pleasurable frustration to remind me of what was fun about old-style puzzle games (yes, even about replaying them) without making me actually walk away. Most of the challenges are not really terribly hard, and with the hints from the framing story, most are pretty doable.

The beach house environment itself is almost puzzle free, by contrast, but it is full of in-jokey bits (books full of starting lines from Adam’s Lyttle Lytton contest, for instance, or — my personal favorite — randomized cocktails named after IF games).

Gradually as you move back and forth between levels, a broader story emerges. It concerns a game rewritten by multiple authors, not yet fully evolved; it is ultimately a story about the IF community’s struggle to elevate the state of the art, with most of the major characters recognizable as avatars of real people.

Some of the game’s most effective moments for me were the ones about upgrades to the game system: I was relieved and very pleased when, halfway through the retro game, the sorceress endows the adventurer with access to a conversation system, where he’d previously had to be mute or just say whatever the game made him say, and she turns out to have quite a lot to talk about. (More than you can actually see in a single playthrough — I think I restored and played her conversation six or seven times to make sure I got it all.) I’m biased here, given how much this ties in with my own work, but I thought that passage of the game demonstrated really effectively IF’s need for characters; and I think this, and several of the endings, were not anti-IF as an art form.

That said, I am generally not a fan of self-referential pieces that exist chiefly to talk about IF genres and the IF community. There’s nothing fundamentally wrong with that, but I always feel like it’s kind of a missed opportunity. Art that’s primarily about its own medium tends to feel a bit claustrophobic to me, in-joke-y, exclusive, and quick to show its age. Both Sins Against Mimesis and The Cabal fall into this trap, despite being pretty funny in their way; Being Andrew Plotkin has tinges of it; and the reason I liked the very referential Apocolocyntosis is that it also had something to say about life, and was primarily about that, rather than being exclusively about IF. In my view Endless, Nameless suffers from this somewhat, especially if one doesn’t get the “really won” ending. (More about that in a minute.)

The endgame of Endless, Nameless seems to say that the IF community is most impeded in its progress by a) apathy and b) trolls. While there certainly are some of those things around, I myself have noticed a lot more trouble with c) people having busy lives and d) a lack of active connection with other artistic and gaming communities that would bring in new life and new ideas. What gives anyone — trolls, over-the-top reviewers, authors — a disproportionate significance in the community is when that community is too small and inward-looking, has too little sense of its own place relative to the rest of the world.

Fortunately I also think that things aren’t so dire as Endless, Nameless suggests. On the contrary, the IF community/communities are demonstrably broadening, with more platforms and more types of user and player, and more contact with the literary (see inkle) and indie gaming worlds. Anna Anthropy’s widely read book, Rise of the Videogame Zinesters: How Freaks, Normals, Amateurs, Artists, Dreamers, Drop-outs, Queers, Housewives, and People Like You Are Taking Back an Art Form

, profiles both Inform as a tool and The Baron as an example of a game that could not have been made by a commercial author, for instance.

I’ve seen a few laments that an emphasis on outreach has resulted in a trend towards super-accessible children’s stuff that doesn’t build on the history of the genre or any expectation of sophisticated literacy about IF past. I get where that’s coming from — though again, I think the solution isn’t to restrict ourselves to just one type of game output, but to try to provide the critical help, in the form of reviews and essays, so that people who want to understand some of IF’s history and the more esoteric games will find them accessible.

In any case, there is a bit more to Endless, Nameless than those points. There are various ways that the conflict in game levels can be resolved, but the best of them — explicitly the best — is the one in which your nameless adventurer avatar is reborn into the real world and is able to appreciate the infinitely greater richness of the universe “without a shaper”. (For a moment Adam’s interest in Carl Sagan seemed to poke through, as the game lyrically praised a world of infinite possibility and natural wonder.) It’s a leaving-the-cave narrative, condemning escapist fantasies not so much because they foster weakness as because those fantasies are pathetically defective compared to the thing from which one is escaping. But at least good art is closer to life than mediocre art.