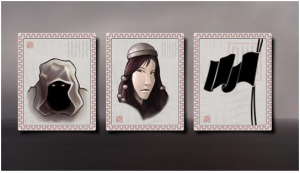 The Silver Tree is a new, Kickstarted project by the Failbetter people: it’s to be short and self-contained, and explore what happened to the 13th century Mongol city of Karakorum in the universe of Fallen London. Since I remain hugely fond of the Fallen London/Echo Bazaar universe and lore, I’m excited about getting a peek in at another piece of it, this time in a slightly more focused gameplay form. The project site has some preview art and an interview with Yazmeen Khan, who is doing the writing.

I not-very-secretly hope this represents a successful approach for Failbetter, as I am not crazy about the way Fallen London generates revenue (make gameplay grindy, then charge players micro-amounts to make it go faster). I would much rather see stories funded through direct purchase and/or prefunding. It’s been a very successful campaign, which is encouraging. Also, they’re offering one of my all time favorite types of backer reward, a deck of custom cards. I am a total sucker for those for some reason.

Dominique Pamplemousse in “It’s All Over Once the Fat Lady Sings!” is a stop-motion musical adventure by Deirdra Kiai (The Play, Life Flashes By, assorted other projects). The whole concept is pleasingly off the beaten path.

Finally, if you’re interested in what Chris Crawford is doing these days, he also has a project on Kickstarter, a Balance of the Planet simulator that asks you to set tax prices for various types of pollution and then calculates a final score based on 58 years of result. It’s a curiously uninteractive experience, in that you set some sliders and then wait to see what happens (or, alternatively, read through the many pages of explanatory articles on different environmental factors).

Chris’ own description suggests that this is meant to be a forensic experience: run the simulator, then stare at the graphs to work out what went wrong, then try again. And you can, indeed, backtrack a bit through the graphs, breaking them down into components and checking out the things that contributed to those components and so on, in a way that is much more in-your-face about numbers than, say, Electrocity or some of the other educational or persuasive energy-policy games I’ve looked at in the past: it’s trying to make the argument quantitatively and crunchily.

And it’s quite hard to get things to balance, so I come away thinking, “hrm, we’re all dooooomed,” not “here’s how to save the planet.” (Except that I also don’t buy some of the game’s premises, such as the baked-in assumption that whatever taxes we set in year 1 we then cannot change at all for the next decades, other than to phase them in gradually.)

All that said, I like the concept of mathematically rigorous simulations to teach these problems; I also like the implication that the player will be able to experiment with different assumptions about the world model. I do wish that there were a more appealing front end and that the challenges were taught gradually, however.