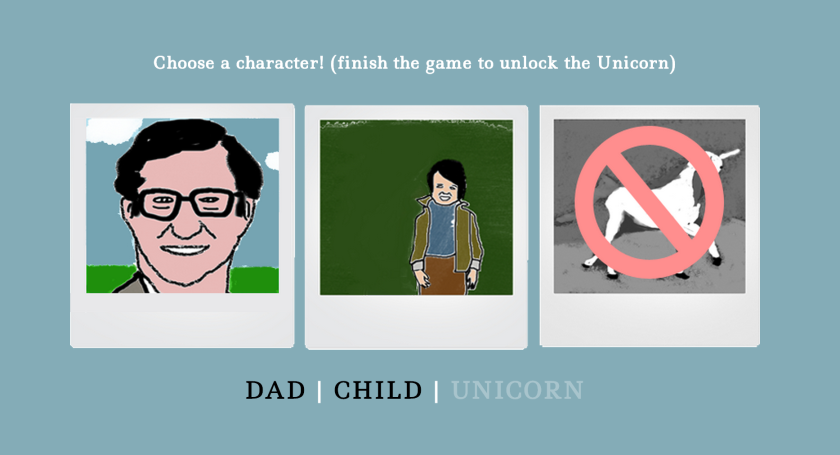 Dad vs Unicorn is a choice-based, slice of life story with three major strands. It takes perhaps five or ten minutes to play each strand. Review after the jump, any spoilers after a longer spoiler space.

This is a rather grim short about a dysfunctional father/son relationship. A lot of work has gone into the presentation: the fonts, the colors, the drawings all pull together in a consistent way, like a children’s book, but with distinctly un-children’s-book content. I wouldn’t really call it fun, but it’s also not trying to be fun.

There’s a particularly nice use of the Twine feature that allows one clicked word to turn into another, as we see how one of the characters reinterprets a series of objects into something else. (If I can be permitted a short digression about the system as a whole: It’s cool to see how Twine’s link behavior has grown more and more diverse as different community members write mods for it, with the result that there is a broadening vocabulary of what clicks can do. This means that Twine games are doing things that traditional paper CYOAs couldn’t possibly have done, but that are also not based in the stats-heavy underlying model of StoryNexus or ChoiceScript.)

As for the story, I’ll give that some space, because it’s short enough that it’s hard to discuss without spoiling bits.

The story mostly expresses a great deal of anger against a father whose indifference verges on abusiveness; there are various anecdotes about his life shared with his son, mostly recounted as elements from the past rather than unfolding in the present. Even though you can read through the story from the father’s point of view, his perspective is mostly about satirizing his view of things further, so there is never a moment when the perspective shifts to reveal his humanity more deeply. He’s just the bad guy, cluelessly focused on money and on himself, unable to empathize with others, uninterested in doing so. As for the son, he comes off largely as the victim of this mistreatment.

The unicorn is the deus ex machina that comes along to kill one or the other of them, being a creature of pure destructiveness and also pure masculinity (the horn is described as a head-mounted penis). If you play as the unicorn, you discover that before it bursts into the backyard to kill a member of this family, it’s been gleefully offing the other animals of the forest. So much for the usual stuff about unicorns being sweet and pure forest creatures.

I thought there was a good bit going for this game, but I also found it tonally hard to take. The father’s cruelties might have resonated with me more if I had also found him more sympathetic. As it was, I had the unicorn kill him the first couple times I played through, without any particular remorse.