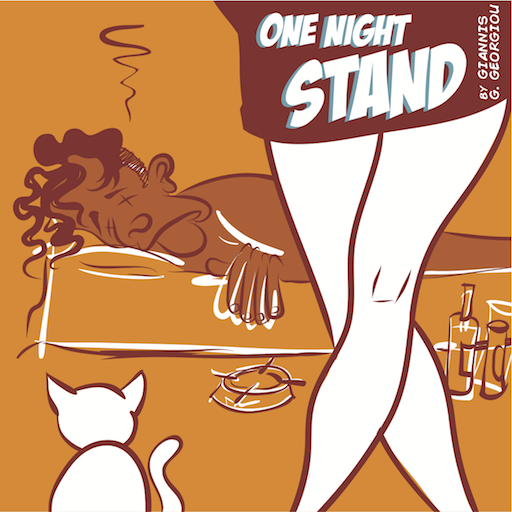 One Night Stand is a parser-based puzzle game in Quest, about a woman who wakes up in an unfamiliar apartment and needs to figure out the name of her date before leaving. I did not complete it.

I did not get on very well with this game’s narrative voice. The following snippet demonstrates several of the reasons:

In one paragraph, we have typos and grammar errors, some awkward phrasing, and a highly unpersuasive self-shaming internal monologue.

Partly the issue is a lack of specificity. “From one night stand to one night stand, from coctail party to orgy” feels like a summary of the situation provided by an onlooker, whereas I usually remember events with some key details attached. Cocktail party: the one on the hotel roof? the one to which you wore the hot pink heels? the one right after your father died where you did eight vodka shots? Even if intentionally dodging any details about the other guests in order to drive home the message about being indifferent to your companions, one could still put in clues about setting, emotional context, age and social class, or any of about a dozen other things that would make the protagonist much more individual and thus more interesting.

The other issue, though, is a feeling that this woman was largely invented for the purpose of being lectured about her sexuality, and that was also a bit uncomfortable. This is not to say that the story of a woman who regrets recent life choices can’t be done well, but Bridget Jones this is not. Indeed, I have the sense that the author has contempt for all of his characters, since the male inhabitant of the apartment appears to be grotesquely slovenly and to collect souvenirs of his conquests without the permission of the women in question. We’re not, at least initially, shown much to make us like either of them, and if we encounter the one other person in the flat she yells at us for our disgusting promiscuity. Nonetheless, the female protagonist’s sexual adventures are portrayed as somehow more morally wrong than those of her partner.

I’ve picked one passage in order to be able to dig into details a bit, but it’s fairly representative.

Implementation could also have been stronger. Here is a bit where I am trying to clean the kitchen floor. Its immense greasiness is apparently a barrier I am supposed to try to resolve, even though I am not really sure what it is the protagonist hopes to find there, and I am kind of thrashing about with both verb and noun synonyms:

> i
You are carrying your high heels, a red shirt, your panties and a bottle of chlorine solution.

> use chlorine
I am not going to use this on myself.

> put chlorine on floor
I can't see that. (floor)

> use chlorine on kitchen
You pour some chlorine on the greasy floor. Some of the grease gives in, but nothing major happens. Wow! You haven't seen anything that dirty before!

There are ways to make Quest auto-suggest verbs, as I recall, but (perhaps to preserve the difficulty?) either the author chose not to use them or there was some mode setting that I was missing. At any rate, that option didn’t seem to be available here.

In any case, after poking at this puzzle a bit more, I decided to stop.