In keeping with the season, three short reviews of horror IF. The review of Her Pound of Flesh gets into some spoilers, but they’re clearly marked; otherwise, these should be safe to check out even if you haven’t played the games in question. 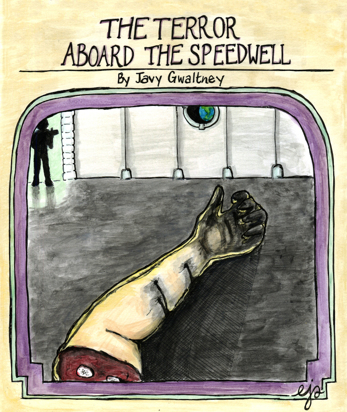 Terror Aboard the Speedwell is a premium Twine game that sells for a few dollars on itch.io. It starts out as a slightly Heinleinesque story of heavily-armed spacefarers checking out interplanetary dangers (though in this case, what you’re scoping out are the radioactive remains of an apocalyptic disaster on Earth, while most of humanity has moved to Mars). After things go wrong on the planet, your crew encounters some sort of alien biological infection, at which point the story heads into base under siege/zombie horror movie territory, as it’s keen to acknowledge itself:

I wasn’t crazy about this and similar bits of lampshade-hanging, and I also felt that the writing as a whole was sometimes trying to be a screenplay for an action movie. There are many long passages (or at least, long in the context of Twine games) in which characters bark dialogue at one another, with some action but a minimum of introspection or setting description. I think I would have preferred to have action points more frequently, even if they were just MORE options to move the story forward: interactive fiction can do amazing things with the building of dread purely through pacing of text and links, but Speedwell doesn’t spend much of its energy on that.

Likewise, there were some passages where the characters were making important decisions about how to protect themselves in which the player really doesn’t get a say, and that somewhat cut the tension of otherwise fairly powerful scenes: I was less afraid than I might have because I wasn’t the one who had to take the decisions.

These gripes are as much about taste as about craft, though, I have to admit. I prefer understated, dread-focused horror, whereas this is a gross-out piece that consciously models itself on old-style CYOA books and horror movie tropes rather than on other contemporary Twine work: a context that makes sense of some of the aesthetic choices that I wasn’t keen on.

Meanwhile, there’s also a fair amount going for this piece. It’s more substantial than most Twine games and has a big cast of characters all of whom have detailed attitudes towards one another. After a linear setup, it branches fairly strongly — I played to three substantially different endings, as well as some smaller variants on these. There are some good set-piece moments, too; Speedwell does particularly well on the scenes where the protagonist is realizing that whatever just happened spells probable doom for everyone, even though the symptoms aren’t yet in evidence.

Overall, Speedwell is more about how you cope once the monster is definitely out than it is about the time you spend thinking about what might be under the bed.

Lights Out, Please is a collaborative ghost story collection in Twine. The collection is quite varied in style, content, and strength of writing. Many of the stories in some way involve abuse, so do note the trigger warnings. 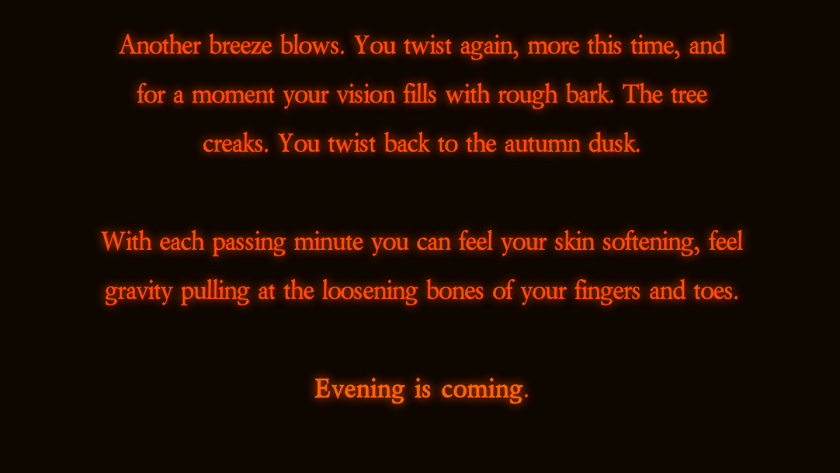 My favorite of the collection is Kitty Horrorshow’s “The one about the carnival,” a tale about the experience of a corpse hanging outside a carnival. Its lyrical description of autumn and an old-fashioned funfair calls to mind Ray Bradbury; the situation reminded me of “Strange Fruit”, suggesting a background of racial violence even though the story never explicitly goes there. It is most of all a story about human fear and failures of empathy, and our sometime inability even to recognize a fellow being in pain.

The letters glow orange on black, and even the text centering — which I usually dislike for extended reading — here seems to fit the unmoored situation of the protagonist.

The collection also includes a short but distressing story by Porpentine, as well as a range of other works, some by authors I hadn’t encountered before. If you go through this link, you can make a donation that will be shared among all the artists. 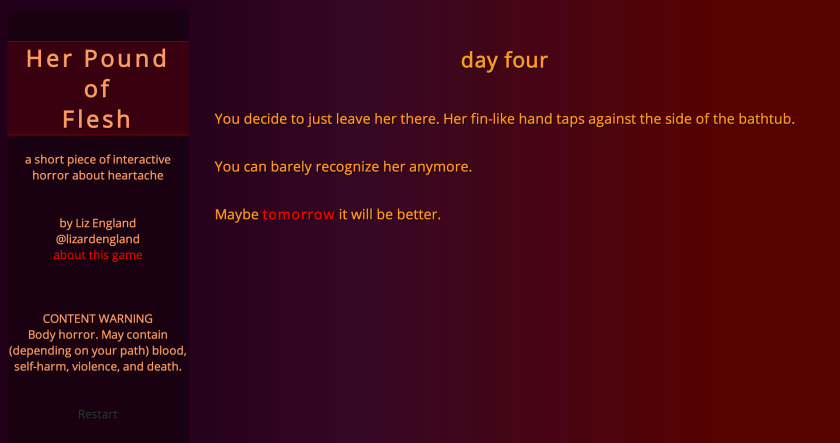 Her Pound of Flesh (Liz England) is a short story about trying to retrieve a lost loved one… by growing her over again in a petri dish. This works about as well as you would expect it to, and things go horribly, grotesquely wrong: your creation is monstrous and yet you are expending everything you have in order to keep growing her, a little in the manner of Horse Master.

Many of the middle choices of the game involve how much you are able to care for the thing you’re growing even as it becomes clear that it’s not a replacement for the one you lost.

There are several endings (helpfully tracked for you), which turn on how much you’re willing to double down on your devotion to your regrown beloved. The combination of endings fell slightly short for me — I didn’t feel as though they really cast that many different views on the situation, so reading through all of them did not add as much depth to the story as I might have hoped.

Nonetheless, the main body of the story contained some effectively squicky moments. In particular, there was one point where I was appalled and grossed out by one of the choices available to me, but also so curious about what was going on that I went ahead anyway, partly to see whether the author was really going to go there. Spoilers follow.

The bit in which She has developed a “deep red wrinkle” that you can force open seemed so obviously to be a figure for sexual assault. It doesn’t actually lead to that territory; the wrinkle turns out to be a sort of proto-mouth instead.

But the very possibility served to emphasize Her total vulnerability and lack of body autonomy in this situation, and the way the protagonist is willing to regrow his beloved even if the resulting entity exists primarily to provide sensations like “the smell of her” or “the feel of her hair”. Though she never actually becomes a brainless sex-toy object in the story, that scene points out the grotesque possibility.

To my mind, this is what the real horror of the story is about: love that instrumentalizes its recipient to the point that the lover forgets the beloved’s independent personhood; obsessive desire that won’t let go even when that desire is plainly unhealthy for all concerned.

7 thoughts on “Terror Aboard the Speedwell, Lights Out, Please, and Her Pound of Flesh”