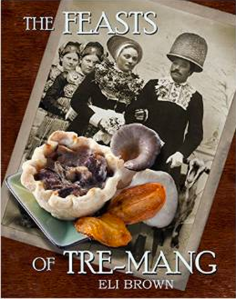 is a fictional cookbook. That is, it contains recipes that you can actually cook, but they claim to be a variety of holiday dishes from an obscure Atlantic island called Tre-mang that was destroyed by volcanic eruption in 1914.

As you might expect in a cookbook, there are lists of ingredients, methods, and measurements; there are pictures of finished dishes, and editorial notes about safe substitutions. There are also explanatory articles about Tre-mang history and culture, the contexts in which these foods would be presented, and the life of Theodora Peterson, an anthropologist’s daughter whose diaries are the chief source of surviving information about Tremanner cuisine. Brown intersperses these with “old” photographs, maps, portraits, the Tre-mang flag and currency, and even Tre-mang-style erotic postcards. (It seems that Tremanners were very much aroused by ears.) It is narrative-of-objects stuff, though supported by lots of straight written text as well as well.

This is a self-published book, and it shows a bit in the typography and proof-reading. (Margins! Margins are good!) The food photography itself looks like it was handled by someone who knew what they were doing, however: the dishes are lovely and appetizing.

Likewise, the quality of the invented objects does vary a bit: the flag, for instance, though nominally designed in 1720, is stitched with an obviously computer-age font; a picture of ancestral Tre-manners with baskets on their heads does feel a trifle unpersuasive. Some of them are really good, though. The peculiar sketch of the “devil duck” of Tre-mang does look (at least to my eye) like an old scientific sketch, save its bizarre and improbable neck length, and the book includes a number of drawings and paintings that were either skillfully created or skillfully repurposed for their present form.

The Tre-mang that emerges is sometimes very silly. Brown is partial to fake etymologies, and comes up with far-fetched explanations for how “shrine”, “phony”, and “bamboozle” are based on Tre-mang language and tradition. The scatological and the absurd also appear: there are no shortage of jokes about goat dung, and the Tremanners’ wedding ceremony critically involves the bride and groom urinating into a single urn.

In other places, Tre-mang comes off as utopian or subversive, particularly when it comes to gender relations: despite a relatively traditional culture in some respects, Tremanner women have a host of resources for negotiating their own power, and use secret names for themselves in order to communicate when they don’t want to be understood by men. In one case, they accept a young trans woman’s desire to join in the female puberty ritual even though her father and brothers disapprove (though we don’t hear what happens to her afterward). Elsewhere, there’s a sad anecdote about the women of the village gathering to unstitch a marriage quilt for a woman with an abusive husband.

Similarly, there’s implicit criticism of some colonizing approaches: the Tremanners battle a series of unwelcome overlords and eventually manage to eke out something resembling independence. Meanwhile, Theodora’s father writes condescendingly about Tre-mang, and as she grows increasingly fond of the island and its inhabitants, his contempt for the people drives a wedge between them.

My favorite thing about the book, though (and really the only possible excuse for calling it interactive) is the way the recipes reflect and reinforce the storytelling. Tremanners are said to believe that the souls of the departed ascend the island’s volcano: this is represented with a funnel-shaped funeral cake, which one eats in order to speed along the lost spirit. A seaweed-flavored chowder pie is meant to be eaten in the context of ceremonies retelling the life-stories of sailor ancestors (life-stories are themselves often false). To make these foods is to involve oneself experientially: a little bit like gameplay, a little bit like ritual.

The twin ideas of memorial and invention of the past recur many times in many ways in the book, and we’re invited into nostalgia for a lost culture that never existed:

It is cliché to say that the beloved live forever in our hearts—thanks to Theodoa, Tre-mang abides on our tongue. Share these recipes and stories, and keep Tre-mang alive. May we all put down our forks, pat our full bellies and say “I too, am a Tremanner.”

The content and the project itself are, in short, a celebration of imaginative eccentricity.

2 thoughts on “The Feasts of Tre-mang (Eli Brown)”