Hamlet’s Hit Points breaks down classic storylines into structures that can be deployed in tabletop (and sometimes digital) RPGs.

Hamlet’s Hit Points has been recommended to me a number of times by people with experience in RPGs, narrative, or systems design. Since I’ve recently been thinking and writing more about the stats-and-point-assignment aspects of narrative design, I came back to the recommendation this month. (It’s available as a physical book from various places including Amazon, but for various reasons I’m linking to Amazon less. You can get the book as downloadable content for $8 from DriveThruRPG, so that’s what I’ve linked.)

Hamlet’s Hit Points starts by acknowledging the influence of Hollywood writing guides of the kind I’ve sometimes covered here, and then offers its own kind of structural analysis of story beats, intended to cover both conventional narratives and RPGs. (The book is focused on tabletop RPGs with a human game master.)

END_OF_DOCUMENT_TOKEN_TO_BE_REPLACED

The Cambridge Introduction to Narrative is a book I’ve been chewing on now for several months, since it raises a number of issues about how to describe and think about narration but doesn’t (except occasionally and briefly) attempt to apply those terms or concepts to interactive literature. So this series has become less anything resembling a review than a set of responses and observations; although I am still trying to summarize the contents just enough that someone who might not want to read the whole book could come away with a clear sense of its subject matter and purpose.

END_OF_DOCUMENT_TOKEN_TO_BE_REPLACED

The Cambridge Introduction to Narrative approaches stories from a very different perspective than most of the game writing, novel writing, and screenplay writing books I’ve covered here before; instead, it’s an academic approach to describing what narrative is, based in the field of narratology.

Last month I looked at the first six chapters; now I’m returning to it. As before, I generally found myself reading this overview with an eye to how interactive media tend to compare, since Abbott only examines hypertext to a limited degree, and other interactive narrative very little at all.

END_OF_DOCUMENT_TOKEN_TO_BE_REPLACED 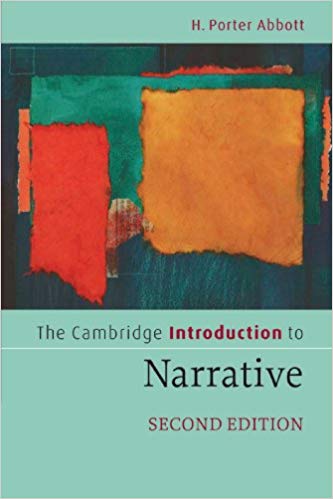 The Cambridge Introduction to Narrative approaches stories from a very different perspective than most of the game writing, novel writing, and screenplay writing books I’ve covered here before; instead, it’s an academic approach to describing what narrative is, based in the field of narratology.

I’m covering this one in some depth, because I think it’s interesting to compare the terminology it uses with the terms common in other types of writing and game writing and interactive fiction guidance. So this post will cover the first portion of the book, and I’ll cover (roughly) the second half next month.

Chapter 1, Narrative and Life, speaks to the idea that narrative is a fundamental human function, that we possibly can’t even form memories without making stories about the events that happened to us, and that we have an instinct to try to work out the history or past narrative of things when we encounter them. Abbott ends this section with a few paintings that challenge us to understand them narratively but also resist casual interpretation.

Among other things, the chapter rather inverts the idea of environmental storytelling as a technique by suggesting that we are constantly making up stories about our environments, and that any space we might enter in a game would be read in this way by players, whether we wanted that or not.

END_OF_DOCUMENT_TOKEN_TO_BE_REPLACED

At NarraScope last weekend, Mark Bernstein (“Those Trojan Girls”, previous observations on hypertext narrative) was passing out a booklet entitled “The Fellow Who Caught Fire.” On the left-side pages are sections of a story; on the right-side pages, commentary about how stories are presented. Some of the areas for discussion are familiar from non-interactive literature, such as framing, tense, and person. Others dig into topics like explicit choice and link placement in hypertext narrative.

Since not everyone will have access to these, I thought I’d talk a little about what it contains, and some thoughts I had in response to Bernstein’s questions and provocations.

END_OF_DOCUMENT_TOKEN_TO_BE_REPLACED

Starting in mid-2017, I’ve used the first Tuesday of the month for reviews of books about game writing, and occasional books about other writing in general.

As of now, I’ve gone through about two dozen — including everything from self-published Kindle ebooks about interactive fiction to acclaimed classics of screenwriting advice — and that doesn’t count the books I read, or started to read, and decided they were just too unhelpful to cover on the blog at all.

I feel like this project is drawing to a natural close.

While there are a handful of good writing books left unreviewed on my shelves or my ebook collection, I’ve talked about pretty much all the ones that had a strong bearing on interactive work; and I’m finding there are diminishing returns on reading more of the same. But it’s been useful for me, seeing what is out there, and I hope it’s been helpful for some of you as well.

So I’m shifting process a little. I’ve started instead to cover academic work that might interest IF authors and narrative designers — trying to make it a little more accessible and curate some of the stuff that might not be easily found. (My article on Max Kreminski’s work is part of that). 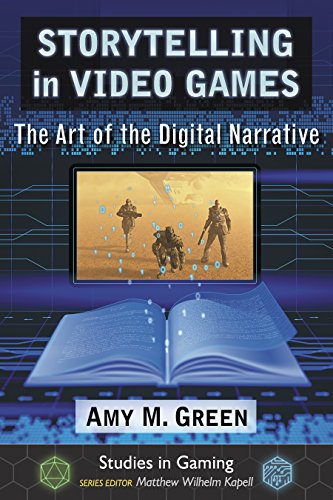 Today’s book, meanwhile, is a piece that straddles the line. The title, Storytelling in Video Games: The Art of Digital Narrative, sounds like it could easily belong to authorial how-to piece. But this is a piece of scholarship in digital narrative, rather than a craft guide, a speculation on experimental narrative creation, or a how-to book about getting on in the industry. The subtitle “Studies in Gaming”, is an important clue here. After a general introduction on why her topic is important, Green goes on to look at concepts of agency, immersion, and worldbuilding; and then to dig into how different long- and short-form games deliver their narrative experiences. She ends with a chapter on games studies in the classroom.

Green is interested in talking about how game narratives work, but from the perspective of a critical reader. She covers Firewatch and Everybody’s Gone to the Rapture, Far Cry Primal and Fallout 4 — and any number of others — via Baudrillard and Benedict Anderson. The rest of the time, much of the text consists of summaries of the various games and their features, and some the critical insight about them as games is pulled in the form of quotes from game critics.

Relatively little of her own critique struck me as new information, and — ironically — in some cases her desire to communicate the emotional impact of things like complicity and immersion produced descriptions that to me felt both hyperbolic and obscure. For instance, she writes about the climax of Last of Us:

I puzzled a little over this — is she claiming that the player is more embodied or more present in the narrative here than at other, less tense moments previously? — but I think she means that at this point in the story the player, enacting the protagonist’s grim choices, cannot escape feeling both complicity and an intimate physical awareness of the acts.

I found myself pulling away from this book, and I think I’m just severely not the target audience. Going via Tzvetan Todorov to conclude that stories need an opening hook and that Last of Us has one — this feels like coming up with an itinerary that includes two hours on the Eurostar but the only destination is my corner shop.

For someone who comes from a humanities academic background but who knows relatively little about games, it might be a different story; though I’m afraid probably few people who meet that description are reading this blog with any regularity.