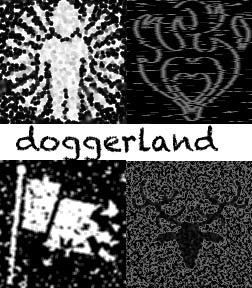 A. DeNiro’s Doggerland belongs to the interactive poetry school of Twine: highly personal, only loosely narrative, making play with hover effects as well as links in order to evoke some connections that aren’t explicitly stated. It concerns, among other things: winter and isolation, global warming, childhood, problems with America’s health care safety net, parenthood, glaciation, the passage of time, and a personal decision which (since the work is described as autobiographical) I assume is true to DeNiro’s actual experience.

There is, as far as I could find, one branch point where you can choose which of two vignettes to read, and since links are marked with icons rather than with text, it’s hard to call this a choice: it’s more of a lottery. The work is otherwise linear-exploratory, allowing the player to decide only how much depth to experience at each point before moving on.

I might almost have preferred not to have that branch. I replayed the story to see what I had missed the first time around, but the structure is otherwise so tight and the emotional impact so much tied up in the process of revelation that playing for completeness the second time felt like a diminishing of the experience. Perhaps. But then, the theme of opportunity cost is also appropriate for the story. And then, also, I understood the shape of the piece better the second time around, so perhaps it was worthwhile to encourage this. I don’t know.

I do know that it has a quality I associate with good poetry, which is that the more I think about it, the more it pulls together, the more the different screens and different text seem thematically interrelated.

The rest of what I think about this is not about craft but about content, so I’m going to put a spoiler jump in now.

This is a history of a man finding a moment’s breathing space, a short period of solitude and thought, before embarking on the trip to the Czech Republic where his wife will receive the in vitro fertilization that will lead to twins. In that moment he thinks about his childhood; his wife’s need for children, perhaps greater than his own; the fact that his children will inherit a world altered by global warming, but that ancient man also lived in a world very unlike ours; about refusing to shy away from difficulty, but also about how this is a form of death, the end of the life he’s used to. It’s not really mostly about why he’s made the choice to become a father, but more about the mental adjustments involved in taking on that future. It’s about the moment after the choice is made and before it takes effect.

It is both very personal and very distancing, presenting images and observations but refusing for the most part to name or describe the emotions of the thinker. We’re left to guess at those, as far as our empathy can take us. The persistent visions of empty ice suit the story well.

Nonetheless all this resonates with me in ways that many more open and visceral Twine stories do not. I have some experience with extreme ambivalence towards parenthood, and Doggerland spaced me out for a few hours when I played it.

A lot of the more sentimental forms of art tend to soften the edges of such decisions. All you need is love! Once you open your heart, your life is immeasurably better! Like an Instagram filter, these narratives are familiar and comforting and blur away many truths. There are things to fear about having children. There is sometimes loss in making a major change to your lifestyle.

Doggerland never gave me the impression that the author regretted this decision — not at all — but it is crisp and unblurred.