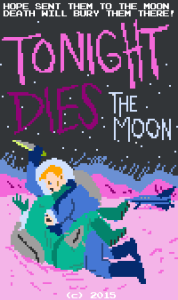 Tom McHenry is familiar to people who follow Twine as the author of the grotesquely fascinating Horse Master. Tonight Dies the Moon is his Twine contribution to Antholojam, and is a diptych of stories about an ongoing Earth-vs-Moon conflict. It is less narcotically surreal than Horse Master, but it shows many of the same influences and artistic impulses. There is pixelated art, there is resource management more for the sake of the experience of managing resources than because the player can ever hope to gain anything thereby, there are small evocative hints of a large horrible dystopia.

At the beginning of the story, you’re allowed to choose which you come from, and have an entirely different experience depending on your selection.

If you choose the Moon, you live out your life as a space farmer in a roughly communist pod, obsessing over which of about a half dozen crops you should plant each year on your personal allotment. If you save up enough, you can buy a ticket back to Earth, but I’m not sure it’s possible to succeed. I managed to scrape together enough cash to buy a little extra land, but there are arbitrary crop failures and problems, and you periodically need to revamp your farm equipment or your yields drop, and you only have so many seasons available to you. At no point during your Moon life do you attack the Earth.

If you choose the Earth, you’re a young person living out a job both depressing and soul-numbingly boring, in which you control a combat drone attacking moon bases. You spend more of your time filling in spreadsheets than you do piloting your craft. Piloting the craft is slow and cumbersome but really easy anyway. It is the opposite of a first-person shooter, a videogame representation of combat that makes it boring and unheroic. Where Unmanned takes on the moral dimensions of drone warfare, Tonight Dies the Moon comes more or less from the starting point that it’s pretty horrible even without considering the experience of those being bombed. Though, of course, one should take that into account.

Both stories are less lonely than Horse Master. The Moon protagonist has fellows in ger living environment; the Earth protagonist has roommates and parents. This gives McHenry a little more scope for individual characterization, and he uses it well. The awkward conversation with the Earth protagonist’s parents is highly plausible, touched by love and anxiety and resentment in both directions. It can go well or badly, depending, though it may not be immediately obvious why, and this too feels accurate to family relationships, especially in transitional young adulthood.

Slightly more spoilery discussion after the jump, but for my tastes, this is one of the best Twine pieces I’ve played this year.

At the core of the Earth story is the idea that capitalism is exploitative and evil and promotes misery: worker conditions are bad, health care is a scam, and entertainment is stupid and bigoted. In McHenry’s alternate 2000 AD, TV is crammed with sitcoms and dramedies about male nurses, shows in which female doctors are presented as an emasculating Other. Earth is, in short, a caricatured version of the United States in 2015: other cultures and government forms aren’t really depicted. The protagonist works at the drone-driving plant because there aren’t a lot of other options for getting health care vouchers, but dreams of moving away to the Moon.

Meanwhile, life on the Moon: every season you plant a large number of acres for the government and a small number of acres for yourself. Every season the government gets to sell its crops first, driving down the value of that particular type of harvest. (Never plant the same thing that the government is planting, or you’ll get the worst of the resale deal.) After a number of seasons, you die pointlessly and arbitrarily from a bomb bursting in the atmosphere and knocking out the electronics that keep your base functional. Is this the same bomb sent by the Earth protagonist? It’s not clear and, in a sense, doesn’t matter. When I played, I played the moon story first, so I wasn’t even aware of that as a possible explanation for what was happening until later.

Neither the Moon character nor the Earth character has any real animosity towards the other. They’re both just part of something systematized and larger than themselves. It’s not really clear that the Moon’s semi-communism makes for a much better experience than the capitalism on Earth. The command economy is imperfectly run and people routinely starve to death, though as you live through enough Moon seasons it becomes easier to ignore the flavor text about famines and deficiencies; easier to concentrate just on the numbers.

People on the Moon entertain themselves more actively than those on Earth, having fewer resources. Instead of watching pablum about male nurses, they play a “game” of exactly copying out pieces of paper owned by their friends — an echo of medieval manuscript transmission, and more overtly an echo of samizdat, except that what they’re copying is the text of pot-boiler novels from Earth. But this leads to one of the more curious interactive vignettes I’ve played, in which you’re invited to type out precisely the text you’ve been given. In contrast with Apartment’s typing scene, Tonight Dies the Moon does not stop or correct you if you type the wrong thing.

I obediently did copy, being as faithful as possible. I’m not sure it matters at all what you type here. The game was not obviously checking and didn’t give me a pat on the head for getting it “right.”

I suppose one might also choose to subtly revise what was written, or make small corrections: the text I was copying had a character named Jaqueline, and I was tempted to repair this to Jacqueline, but didn’t. Blame my classical training. When one is trying to establish manuscript traditions — that is, to work out which texts were probably copied from or dependent on which others, and therefore which manuscripts are closest to the original text — the propagation of errors is a big help. If manuscript D has all the same errors as C plus some new ones, you can probably guess that D is a descendant of C. But! Some enterprising monks with good grammar corrected the mistakes in the texts they were copying as they went along. Good for them, but it makes the job of modern editors harder. Thinking of hypothetical editors in the Moon-future, I left the errors, if they were errors, in place.

There is a shorter but in some ways similar portion in the Earth story, where you can fill in a spreadsheet indicating how much has been spent on sending your drone to the Moon. There are no indications about what numbers you should put in, and it’s unclear that anyone is reading these reports or reacting to them in any way. So you’re free to just type what numbers you like, and make it look like the attacks are a net savings or a net loss for Earth, as you will.

For both the Earth and the Moon protagonist, there are moments of open-ended freedom, but it’s freedom with no perceivable consequence.

Victor Gijsbers has also recently written about this game.