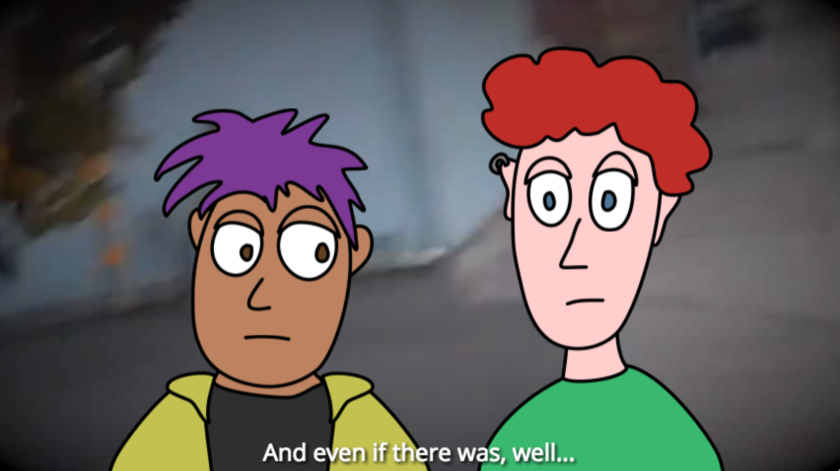 Conversations We Have In My Head is a very short, real-time dialogue game by Squinky, describing a conversation between a genderqueer protagonist (Quarky) and their ex (Lex). As the player, you’re choosing responses Lex can make to Quarky’s revelations and questions; new options come and go on the screen. This gives the game a smooth, relaxing quality — this is an odd analogy, perhaps, but it felt a bit like a driving game to me, in which you’re looking at the scenery sliding by and deciding which way you wanted to steer, but didn’t have any brakes.

If you want, you can be totally silent and just listen to Quarky monologue about the changes in their life. Or you can offer lots of feedback, or even more or less wrest the conversation around to yourself on a regular basis, reminding Quarky of the differences between you and of harm done in the past. I like the way this flows, though after about the fifth playing I started to wish I could fast-forward to important junctions in order to try some of the alternatives. Still, the game is so compact that even re-listening to the same opening doesn’t slow things down too much.

Squinky includes the following paragraph in their description of the game:

Many of us have voices in our heads that constantly remind us of our perceived failures and inadequacies. Sometimes, those voices appear to us in the form of a once-important, now-estranged person from our past. This is a game about having one of those conversations with that voice in your head, and the many ways it can go.​​

Despite the conflict implied in this paragraph, I found that the majority of the conversations I generated with Conversations We Have In My Head were net positives, rather than negative reflections on the protagonist or on what happened in the past. Perhaps growing up and coming to know themselves better has opened the possibility that the characters might be kinder to one another and keep things in better perspective than they used to. There are of course some exceptions.

This piece is an interesting counterbalance, too, to Squinky’s previous Interruption Junction: both games make a chief mechanic the decision to listen or interrupt, to make space for other people’s thoughts or to assert the importance of your own. But in Interruption Junction, those decisions always lead to frustration, never to any effective communication; in Conversations We Have In My Head, there’s something to be said both for listening quietly and for interrupting with your own thoughts some of the time, and you have some control over the content of what you’re going to say.

Mattie Brice has written about how Conversations touches on one of the messy aspects of human existence, the fact that our lives don’t always meet our own standards; that it’s challenging to advocate for better behavior and better communities when we ourselves have screwed up and indeed still retain some biases, some systemic bad habits, some misjudgment and poor understanding. We have to be able to forgive and try again; we have to be able to look at our own flaws, neither pretending to be perfect nor succumbing to self-hatred as a result.

One thought on “Conversations We Have In My Head (Squinky)”