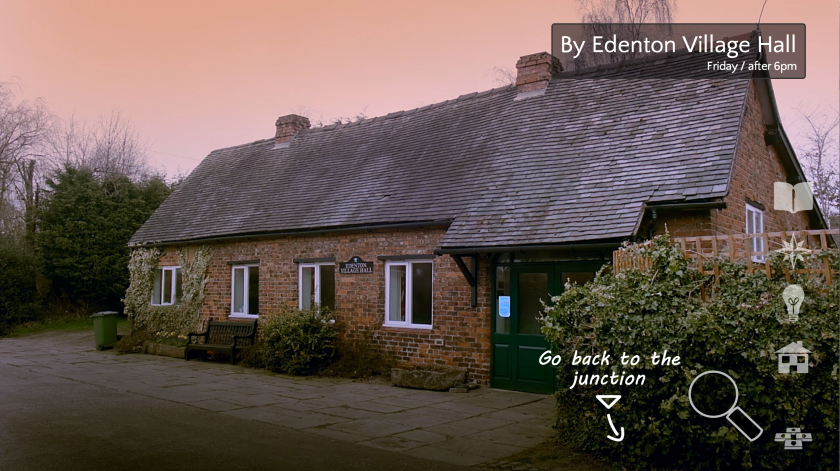 Contradiction is a murder mystery game set in a small English village. You control the movements of police inspector Jenks, who wanders around interviewing suspects, finding contradictory elements in their statements, and pressing them for more. Conceptually it’s akin to Detective Grimoire or (to a lesser degree) Phoenix Wright; the twist being that it’s interactive film, with live action segments for the interrogation scenes and for many of the transitions as Jenks wanders the village. It’s available for the iPad, and for Mac/PC via Steam. Though I have some criticisms of the design, I enjoyed it quite a bit; it is vastly better than Tender Loving Care.

Conceptually, this doesn’t stray that far from its graphical adventure inspirations: you run into locked doors and have to find the key elsewhere, or dark rooms that need a light, or so on. Most of these puzzles are pacing devices and aren’t tremendously difficult, though it’s possible to get stuck because you haven’t noticed a useful object.

That issue is compounded by the fact that the game is divided into one hour segments: “after 5 PM”, “after 6 PM”, and so on. The clock advances automatically when you’ve reached critical plot beats. This allows the game’s creators to move characters around, make the pub and houses open and close at different times, and give a sense of life to the village. There are sometimes new cut scenes when you go someplace you haven’t been already that hour, opening up new information. The downside is that this means you really need to revisit every location during every hour, even if Jenks doesn’t have a good reason to do so at the moment. Not realizing this is what got me a bit stuck several times in the early game. There is a TIPS panel you can open to get advice about what you’ve missed exploring recently, but I found it was occasionally buggy in the late game.

“Always nice to randomly find a key on the floor.” — Jenks’ voiceover, at one of the more credulity-stretching coincidences

Finally, the logic of the investigation is very much game-logic rather than real-world logic or even TV investigation logic. There are a lot of things that we discover simply because Jenks finds a set of keys and decides to do some warrantless searching. He has no compunctions about small acts of petty theft. Sometimes he decides that objects are interesting and worth pursuing even when they’re not yet of any obvious relevance to the investigation — a point that stands out the more because of the realism of the sets. In an animated graphical adventure, it feels semi-plausible that the protagonist interacts with the one object in the room that has a hotspot, especially if (as is often the case) the setting is otherwise a bit bare. In Contradiction, Jenks will often wander into a storage room crammed with objects, as storage rooms often are in the real world, and light on the one piece of paper that he has arbitrarily decided is going to matter, even if at first glance it says nothing about anyone involved in the case. And of course, he’s right — but it’s weird. One just has to suspend one’s disbelief.

The contradiction mechanic is also constrained, in that you can only ask people about contradictions in their own statements, not challenge them when you’ve heard some contradictory news from another character. This probably keeps the game within the bounds of playability — even as things stand, by the end of the game I was struggling to juggle all the things I was supposed to remember being told — but it means that some very obvious avenues of investigation are closed. A character admits having an affair with another character? Fine, but you can’t go asking that second character about the affair. You’re never even allowed to bring it up. I’m guessing that real police don’t operate that way.

Then there are restricted pieces of evidence. Jenks takes a loose view of property ownership, but he’s strict about keeping confidences. If a character has told him not to reveal something to another witness, you don’t have the opportunity to bring that up with said witness, even if it seems like it might be a good idea. This, again, is probably to avoid letting Jenks cause scenes that might branch the investigation plot, but it feels artificial.

But if the mechanics are only moderately innovative, the FMV presentation makes it distinctive. The village is rendered with lovely atmosphere and attention to detail, and many of the locations have idle loop film with a much stronger sense of presence than a still image. The live footage of rippling lake water and of the trees blowing in the wind makes the outlying areas of town both attractive and sinister. By the end of the game I was intimately familiar with the glass in the pub door, the steps to a character’s cottage, the gates around an out-of-town mansion.

There are no deeply absurd puzzles of the sort where you make a fishing rod from a rope and a banana, because anything that Jenks needs to do has to be filmed, and so the solutions can’t rely on physical impossibility. Perhaps the author wouldn’t have been inclined to include those types of puzzles anyway, but dedication to the FMV aspect provides limits. (Contrast the also-FMV Missing, which incorporates various unlikely actions and then just doesn’t film the actor performing the ones that would be hardest to replicate in real life. I didn’t finish the first episode of Missing because it was doing too much with hidden object mechanics and implausible puzzles, and not enough with convincing plot, characters, and setting.)

As for the character performances, they’re not realistic in style, but they are fun to watch. Jenks has a way of cartoonishly widening his eyes at people and exaggerating all his movements. Many of the witnesses are entertainingly passive-aggressive about being questioned. Some feel that Jenks is bugging them or wasting their time, and I can’t say I blame them, after I have knocked on their door for the fiftieth time to ask them about, say, a random business card I found on the ground. Paul Darrow’s performance is especially hammy and entertaining, as he plays a no-ethics businessman, unencumbered by tact, who has a snarky word to say about everyone. There’s a quality to these interactions that would be very hard to capture in animation and voice-over.

Per genre, Contradiction is the sort of story in which pretty much everyone is up to at least one or two things they shouldn’t be doing. There are some references to drug addiction, alcoholism, and mental illness, and these aren’t always handled tactfully by the characters, though the game itself doesn’t necessarily endorse the views of the witnesses. I’d like to say a little more about the plot, but since this is an entertaining piece of work that you might well want to play first, I’ll put that after spoiler space.

Disclosure: I played a copy of this game that I bought with my own money.

So I had a lot of fun with this, but I didn’t buy the ending, which felt rushed both in terms of design and in terms of its revelations. It turns out that the pub-owner Rebecca committed the murder in the mistaken belief that she was killing her husband’s mistress, and working this out requires us to remember that she used a particular weird pattern of tape on a window that we may have last seen (in game terms) four or five hours ago. It’s massively circumstantial: we’re SO SURE that there couldn’t have been another similar roll of this tape in the entire village that we’re willing to stake a conviction on it? What, is this hand-made artisanal tape or something? Did Ryan not buy it at an office supply store or similar, and if he did, couldn’t someone else have done the same? Any defense lawyer would poke a hole in our evidence instantly, if it weren’t that Rebecca then cooperatively confesses.

But her confession and indeed the fact of her being the murderer both feel kind of wrong. Throughout the story Rebecca comes off as cool-headed, self-commanding, and not likely to get flustered into anything. And the way she committed the murder, luring a woman to a lake edge and then contriving for her to fall in, is one of the more ludicrous plans one could imagine.

Finally, it’s a solution that is unstuck from the main themes of the story: self-knowledge, exploration of boundaries, the willingness to go beyond social convention in order to stand out, and the way ethics are in conflict with success in a capitalist society.

The Big Bad of Contradiction is the cultish business-training workshop called Atlas, which trains students to abandon their usual limits, be free of guilt, and operate as good little sociopaths, at which point they’ll be ready for a high-paying job at a multinational corporation. One of the things I liked about the story is the way that Atlas comes across variously as creepy and ridiculous, effective and nonsensical. Its sessions of staring into mirrors and throwing poppet dolls into burning fire cans are easy to mock, and yet have a hold over the participants. Students are motivated by competition and the hope of impressing their teachers to do things they otherwise would not. All that is in keeping with actual group psychology experiments, though I wouldn’t have minded seeing a little more about why Simon (e.g.) liked Atlas to start with. But, in any case, we spend most of the game on the question of motive and capability, and in particular on the idea that a strong enough motive will override what we think of as our usual limits.

But Rebecca’s action isn’t really placed in that schema, or not very effectively. What she did, she seems to have done more or less on the spur of the moment, acting from anger. But why? That she would be angry about her husband’s infidelity I believe, but that she would handle it this way, threatening everything she’s worked for up to this point? It doesn’t seem right.

One thing I did like about the ending, though, was the strong implication that there might be a sequel. Whatever my issues with the final bit of the plot, I hope they will make another.