This one was a follow-up question to the asker wondering whether Blood & Laurels was still available anywhere. (It isn’t.)

If there are any other games (IF or otherwise) that you’d recommend for deeper conversational experiences, I’d love to hear about those… I have a rather broad set of interests there, so anything you find especially exciting, new or odd would be great to hear about, especially where conversation is at the center of the game.

…right, okay. Well, that’s quite a broad field, but here are some possibilities, preferring more recent games (though interesting conversation games go back for quite a while).

Parser-based conversation games are often designed to let the player explore concepts that interest them, treating the non-player character like a big encyclopedia rather than a goal-oriented partner in dialogue. That tradition goes back — well, back to the 80s, really, since Infocom’s murder mysteries allowed you to ask characters about important subjects and clues.

A few more recent examples that are either carry some of this concept over to a different interface or allow a different spin on it: Subsurface Circular (above) and Quarantine Circular are both primarily conversation games. Subsurface Circular has some embedded puzzles in the dialogue, including puzzles around manipulating emotional states and the knowledge of both the PC and other characters. As you find out new things, you gain “focus points”, an inventory of topics that you can introduce into conversation.

Speaking of manipulating emotional states, that’s really the primary approach in The Red Strings Club: you mix drinks for NPCs to affect their emotional status, then ask dialogue-tree questions.

Mirror and Queen is parser-based and allows you to type in keywords that evoke a response from the magic mirror. It discourages repeating words, and the main point of the scene is for the protagonist to meditate on her circumstances, rather than to get anything out of the NPC. This makes for a drifting, goalless exploration of the story’s conceptual space.

Weird City Interloper directs most of the player’s interactions with a whole city via conversation topics; it’s subordinating space to dialogue in a way that only a text-rich interface could really do.

Where the Water Tastes Like Wine trades in a currency of stories heard elsewhere in one’s travels. (I contributed to this multi-author work.)

Sometimes the player is asked to reason about the world and express that reasoning back through conversation, or to use persuasion of some kind on another character. This tends to be enough effort — user interface and verb system — that it appears only in games where it’s a pretty central mechanic. The overwhelming majority of such games are mysteries, where deduction is the point.

Detective Grimoire invites the player to assemble statements about particular pieces of evidence by swapping out pieces of their sentence before they commit to something.

Contradiction is a game about catching people out in contradictory statements, so you’ve got an inventory of past things they’ve said to you and can combine these to unlock new discoveries. And, of course, the Phoenix Wright games trade on the player’s ability to find relevant evidence to introduce during courtroom scenes. (See also Wright-alike Aviary Attorney.)

Several parser IF games also explore putting together concepts out of several components. Color the Truth is probably the most recent successful implementation of this kind of idea. The player can combine existing knowledge in order to create new conversation topics for use, like this: 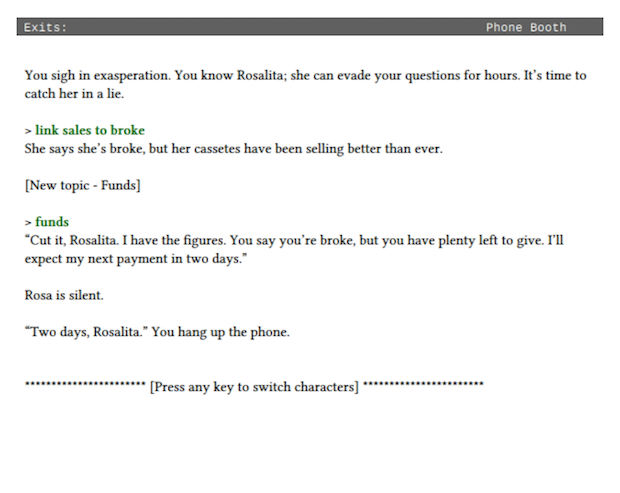 Many conversation-focused games don’t do much with the temporal dimension of conversation — or, if they do, they handle it purely as a timed countdown to make you pick an option under pressure. (See Heavy Rain and many recent Telltale games.) A handful of pieces do more with time, though:

Ladykiller in a Bind does a novel thing where dialogue options become available and go away again over time, so you can be deciding whether you want to go for one of the options available now or wait and pick one later. Christine Love has also talked a bit about rolling her own tools to write this conversation style. (Her portion starts at about 32 minutes in the linked talk; discussion of the tools proper appears around 40 minutes in.)

Wheels of Aurelia is a game that asks you to divide your attention between driving and chatting with the hitchhikers you’ve picked up in your car. I personally found this kind of hard to do well. I know some people who were extremely into it, though.

Aside from the Versu games, Prom Week uses a social practice model to guide how characters are likely to react to you and pass on information; Facade, of course, is an old and well-known example here that still has few serious emulators.

Socrates Jones: Pro Philosopher is in the vein of the Phoenix Wright games mentioned above, but it makes its interaction verbs things like “Question Relevance” and “Press for Backing.” The point here is to teach strategies of logical argument.

Dialogue: A Writer’s Story uses several different interaction metaphors for conversation — I wrote about the demo version here, though I haven’t completed the full version.

See also Lucian Smith’s The Edifice, where a major puzzle involves speaking to a character in an invented language that you first need to learn; and Words of Power and Suveh Nux, both of which have small magical grammars that you must master to manipulate your environment.

With the introduction of voice assistants, there are now a number of Alexa Skills that are games, and that use a conversational mediator to narrate gameplay. There is an Alexa Skill for playing classic interactive fiction, though from customer reviews it looks like there are some clashes of vocabulary in practice that might be a bit frustrating.

Don’t Make Love (Maggese) invites you into a romantic relationship between praying mantises.

Event[0] (Ocelot Society) has a chatbot/parser interface for communicating with a shipboard AI. The AI will decide whether to humor your requests depending on its view of you so far.

LabLabLab builds tools and does research in an academic context into NLU-driven game design.

Fitzwilliam Darcy’s Dance Challenge has the player interact by dancing, then autogenerates responses based on how good your dance performance happens to be. (Mine was always bad.)

If I can mention one of my own projects — it’s a pretty niche item, but The Mary Jane of Tomorrow is a parser-based IF game that uses generative grammars to create a character with multiple dialogue styles and the ability to make up poems off the cuff.

Many visual novels do loads and loads of conversation; I’m not sure whether that’s specifically worth calling out, but for sheer volume it might be relevant.

In the Twine universe, Brendan Patrick Hennessy‘s work has a lot of high-quality dialogue content. I particularly recommend Birdland and Known Unknowns for this.

The entire Lifeline series focuses on chat conversations with the character experiencing the story.

Oxenfree is a graphical adventure game with a significant amount of conversation content.

Firewatch makes use of a salience system that draws on Elan Ruskin’s dialogue method in Left4Dead.

A piece on why I’m interested in conversation interfaces to start with.

Posts of mine that touch on conversation modeling as a general problem.

Here is an IFDB search for interactive fiction works with a lot of conversational content.