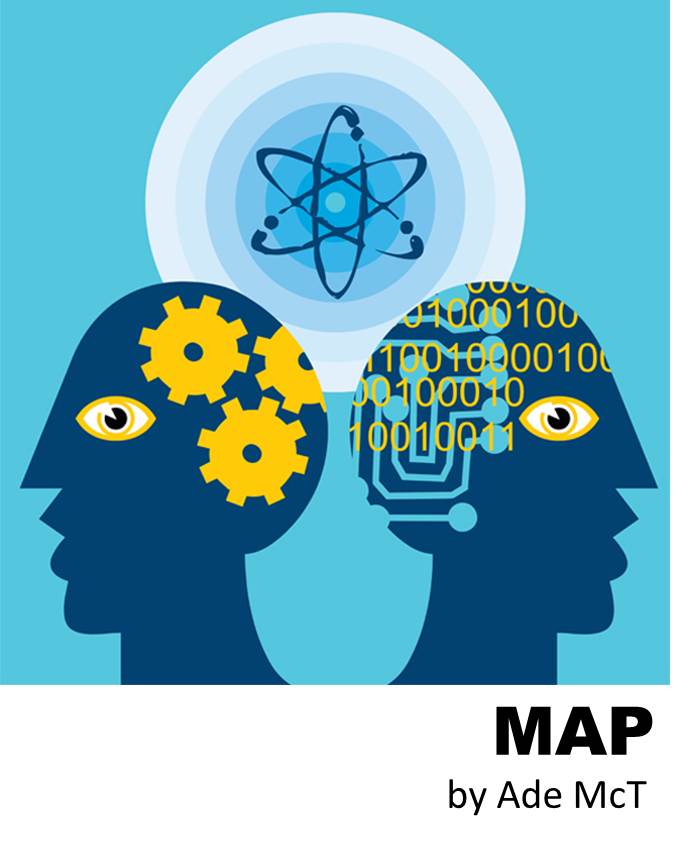 Map is a puzzleless parser game by Ade McT. I played it to three different endings, using a midgame save. Though I wasn’t timing myself, I would estimate that this took a bit over an hour over multiple play sessions.

I really enjoyed last year’s comp submission by Ade, a difficult but clever time travel game called Fifteen Minutes. So I was looking forward to playing Map when I saw it on the list.

As it happens, Map was a) impressive to me and b) very different from Fifteen Minutes. Though the story is also arguably about time travel of a sort, and the propagation of causes and effects, there are no significant puzzles, only exploration (in both space and time) and some critical decisions.

The protagonist is a woman in late middle age whose life is cold and isolating. Her children have moved away, and they don’t get back in contact. She and her husband sleep in single beds and rarely communicate. She is overwhelmingly anxious — we only see this a little at a time, but she can’t bring herself to step further than the driveway of her own house. She fears the outside world, she fears other people, she fears the telephone. Her whole domain is her little house; and she’s on the verge of moving out.

But new doors keep appearing in the house, surreally and inexplicably; doors that allow her to revisit portions of her own past and remake the decisions she made then.

At first this feels tremendously liberating. She has (I felt) said no to too many human connections in the recent past, and made too many choices out of fear. As I unmake those choices for her, her life seems to open out a bit, to become more connected. Sometimes there are other people around the house. The furniture starts to reflect more of her interests. She acts less squelched and isolated. Her rubber plant thrives.

Gradually, though, these choices become stickier and I start to ask myself: did she really do this wrong the first time? And also: even if something was the wrong thing to do at the time, do I have the right to undo that choice now, knowing that I would also be undoing all the consequences in her life?

The plot structure is a branch-and-bottleneck in some respects — the major choices you encounter are all the same and all in the same sequence, as far as I could tell, as you’re actually going steadily further back in time — but there’s a huge amount of delayed consequence; the choices you make accumulate and their ramifications are visible in the house during each day of gameplay.

The result is an experience that reminded me a bit of Tapestry or Photograph or The Life (and Deaths) of Doctor M, using a parser interface to allow the player to revisit important moments in the life of the protagonist. Map is less surreal and less reliant on religious imagery than Tapestry or Doctor M, so it has more time for specific observations about the protagonist.

Then, too, it’s quite disciplined structurally. I was never at a loss for what I could do next. There were no puzzles to hold me up, but there was quite a lot of new material to experience each day. I’m trying to imagine this game recast as a choice game and I think a very important part of the experience would have been lost. Inhabiting the protagonist’s house and spending a great deal of time with her possessions and her small and large memories meant that I felt much more personally invested in her by the end; the story was not so much a trolley-problem as some past philosophical games have been. In fact the layout of the house acts as an on-going reminder of all the important past choices you’ve made.

Meanwhile, the systematic nature of the design means it’s possible to pursue very specific outcomes for the protagonist and achieve them. I suppose you could argue that getting the exact ending you want is, in fact, a puzzle of how to configure all the other pieces. But it’s not a puzzle that gets in the way of your exploring up to that point, and it’s not enormously difficult, once you’ve come to understand how the causes and effects work.

I played with a desktop interpreter, which gave me the benefit of graphical maps rather than simple descriptions each time the house changed. That was cool. That said, I think this game would look awesome with a specialized presentation that enhanced the web interface and presented the map alongside, say? And there were a few weirdnesses about the paragraph spacing in the version I saw, too. But this is quibbling.

I really felt for this protagonist, I was not sure at several key occasions what I wanted her to do, and I was repeatedly surprised by the new light that later parts of her story cast on what I’d already done. Ultimately, the outcome I preferred was the one that preserved her connection with the people she’d known and loved the longest, even if that meant failing to undo some horrible things in her past. I’m not sure that choice is morally defensible, but I did find it satisfying.