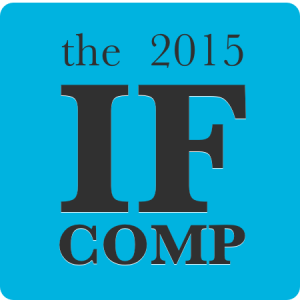 I have now reviewed all the comp games I am going to review, though some of the reviews have yet to be published. Most recent years I’ve done an end-of-comp roundup (2014, 2013, 2012, 2011, 2009, 2008, 2007) in which I talk about standout games, as well as some trends I noticed arising from the competition. This year by request I’m doing that early, even though there are still a bunch of reviews still to come out. It is little lighter on trend analysis than previously, but then one of this year’s main features was having a little of everything, and being less easily summarized.

To my mind this is unambiguously the best year IF Comp has ever seen. There are more entries, and of higher average quality. More games made it into my top tier, and in my view those are all solid competitors with the winners from past years. The bottom end was better too. There were some games that I found hard to recommend currently, but thought could be made pretty enjoyable with a bit more polish. I gave no 1s this year, and even the games that didn’t ultimately work very well for me clearly had something going for them. I didn’t identify anything that I considered outright trolling of the judges, or where I thought the author just hadn’t cared to do a good job.

Then there was the sheer variety. We have a wide range of genres, from SF and fantasy to slice of life, superhero fiction, adventure, mystery, romance, children’s literature, and a few items sufficiently surreal that I’m not sure what category I’d throw them into.

There’s traditional work and experimental work in both the choice and the parser categories, rendered in Inform and TADS and Twine and Undum and ChoiceScript and inklewriter and assorted new and homebrew systems.

There are entries from outside the historical Anglophone IF community — and I don’t mean only that there was Twine/altgame content, but also that we got contributions from the academic world, from the French and Italian communities, and elsewhere.

There are doubtless a lot of reasons for all of this, but in particular I want to thank Jason McIntosh, the organizer, not only for the work that he’s put in on the logistics and the sharp-looking website, but for ongoing effort throughout the year on making the Comp better suited to the IF world as it currently is. Rule changes that might seem small (like allowing authors to run teasers for their work in advance, or permitting translated games to enter) represent a lot of careful thought and discussion on his part, and have a big effect on what the competition is.

More than three weeks remain in the judging period, so if you would like to get your own thoughts in, you still have a chance. You must submit scores on a minimum of five games to have them count.

Top tier. For me, these were the best-in-comp entries.

Midnight. Swordfight. — A parser game about exploring a story through both space and time, and reconfiguring the props on which it runs. So strange, so juicily responsive, with wonderful characters and imagery.

Birdland — A big, endearing choice game about human interaction and how it works, complete with a romance plot that I soundly enjoyed.

Map — A puzzleless parser piece about the choices we make in life. Some excellent writing and a rich assortment of ways the game can end.

Cape — An Undum piece meditating on oppressive social structures and the range of ways that one can fight back against them. More about what vigilante violence (even against criminals) would actually mean and look like than you mostly find in superhero stories.

Brain Guzzlers from Beyond! — An enormously fun, good-spirited, not-too-difficult romp. There are puzzles, terrific illustrations of all the major characters, good pacing, and a goofy application of 50s alien invasion tropes. Longer review to follow.

But perhaps you’re looking for a more personally tailored recommendation.

(These are arranged in rough order of how difficult I thought they were, which is an enormously subjective measure. * means that, due to size/complexity, I didn’t finish this in the time allotted, even with the provided hints or walkthrough.)

If you like an unusual world model: Ether, Midnight. Swordfight., Map, Pilgrimage, The War of the Willows, Laid Off from the Synesthesia Factory, The Baker of Shireton.

If you like choice-based work that does parser-style map and/or inventory modeling: TOMBs of Reschette, To Burn in Memory, In the Friend Zone.

If you like experiments in how a story is presented: Laid Off from the Synesthesia Factory, Life on Mars?, SPY INTRIGUE, To Burn in Memory, Crossroads.

If you share my taste in prose style: Midnight. Swordfight., Cape, Map, Unbeknown.

If you want a strongly characterized narrator: Capsule II, Laid Off from the Synesthesia Factory.

If you like a big world with lots to explore: Gotomomi, Summit.

If you like a sandbox with independently active NPCs: Pit of the Condemned, The Baker of Shireton, I Think the Waves Are Watching Me.

If you like feeling someone else’s pain: Seeking Ataraxia, Much Love, BJP, Nothing Like Single, SPY INTRIGUE, Capsule II, Map, Life on Mars?, The Problems Compound.

If you like moral challenges: Cape, The Speaker, Taghairm, A Figure Met in a Shaded Wood, Crossroads.

If you like stories that keep the plot moving and contain a lot of incident: Birdland, Cape, SPY INTRIGUE, Scarlet Sails, Nowhere Near Single.

If you like shorter stories focused on a single major event: Life on Mars?, Unbeknown, Switcheroo.

If you aren’t that fussed about story and primarily want a toy to play with: Grandma Bethlinda’s Variety Box, Growbotics, The King and the Crown.

If you like thematically justified applications of the time cave structure: Summit, Crossroads.

If you’re a big fan of Liz England’s Isis: The Insect Massacre.

The games I’ve reviewed here were all things I liked or thought well of. I also have reviews in the queue for Sub Rosa*, Laid Off From the Synesthesia Factory*, Koustrea’s Contentment, The Baker of Shireton, Forever Meow, Seeking Ataraxia, Brain Guzzlers from Beyond!, Darkiss, Arcane Intern (Unpaid), Taghairm, Crossroads, and A Figure Met In a Shaded Wood.

* means this is a game I saw in beta, so not so much an official review as some comments.

I wasn’t able to play Onaar, Questor’s Quest, or I Think the Waves Are Watching Me. QQ and ITtWAWM are straight Windows games. In the past I’ve occasionally been able to get around that by playing a game via Skype with a Windows-equipped IF-loving friend, but my usual suspect for this purpose has been unavailable this month. So no luck there.

There was a Mac interpreter provided for Onaar, which I appreciate, but the hacked version of Gargoyle didn’t start up properly for me. I tried two machines with different system installations, one brand new and one fairly elderly (10.8.2 and 10.11, for those playing at home). Neither one worked.

(Update: thanks to the suggestions in comments, I was able to try Onaar and Questor’s Quest using WINE. I Think the Waves Are Watching Me I played via Skype thanks to a helpful volunteer (thanks, Prios!).)

This year IF Comp happens to have fallen at a time when there was a certain amount of breathing space in my client schedule. I do not promise always to be able to extend this offer in the future, but on this occasion, I did try everything except the three games I just mentioned, and am happy to discuss that experience. If you’re an author who has questions about my review/absence of review, my email address is emshortif@gmail.com.