The 21st annual Interactive Fiction Competition is currently on, through mid-November. Voting is open to the general public; the only prerequisite is that you not be an author, not vote on games that you tested, and submit votes on at least five games.

Crossroads is a Twine game about meeting a witch in the woods. It branches very broadly and is extremely open-ended about what ultimately comes of the encounter, as well as the protagonist’s backstory in reaching that point.

A Figure Met in a Shaded Wood is a Twine game about meeting a fortune-teller in the woods. It is quite linear, and makes a point of undercutting expectations about replay.

In neither case does a single playthrough occupy more than 10-15 minutes, I would guess. (Maybe closer to 5.) 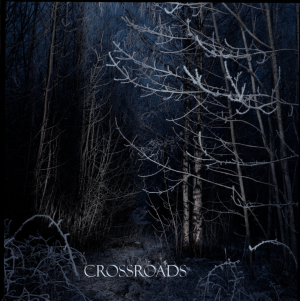 Cat Manning’s Crossroads is a Sorting Hat in form: early decisions produce completely different storylines. You go to see a witch in the woods, but what you do there and why you do it depends entirely on decisions you make in the early game.

Sometimes the Sorting Hat structure can feel a bit random. I really enjoyed Magical Makeover for its charming writing and story world, but when I first played I had no idea that the seemingly cosmetic choices I was making at the outset were going to lock me into totally different story lines. Some other Sorting Hat scenarios offer a bit more agency, but offer it at the reader level: which of the following story types would you like to read? A lot of interactive erotica does this, offering the reader a chance to customize some preferences before going ahead with a mostly or completely non-interactive sex story. And some deliver something resembling a personality test at the start of the story. There’s even a category of what I would call interactive self-help, which begins with a diagnosis of the player’s issues and then proceeds to suggestions or exercises.

Crossroads‘ initial choices might fall somewhere between “what do you want to read?” and “what sort of person are you?” — though the options are idiosyncratic enough that not every person will find themselves catered for. Once you follow through, though, the story you get on the other side of a choice is sometimes quite specific, projecting a backstory for a protagonist who has been, up to that moment, entirely fluid and undefined. So in one of my stories, I became a monster who was visiting the witch in order to overcome my monstrosity in a sort of vision quest; in another, I was driven by vengeance. There is some thematic continuity around regret and healing and coming to terms with oneself.

Some of these stories worked better for me than others, and I wouldn’t say that I was fully able to anticipate what I was getting when I selected a particular story. But I did feel that the early choice was important especially because most of the stories are quite dark. (That I saw, anyway: I don’t think I exhausted the game’s available content.) I felt that I was being given the opportunity to consent to playing, say, a monster driven by blood lust, and that consent made me more willing to explore what followed.

Lately we’ve been talking a fair amount in the IF community about highly personal games, about what that costs the author and about the challenges in judging or critiquing such games — if critique is even a useful response. But games that are going to enter into fraught personal territory often also demand something from the player, a real or simulated vulnerability, a willingness to put some skin in the game. Take something like Dietrich Squinkifer’s 36 Questions, which implements an intimacy exercise, complete with the author’s answers and space to type your own. Even if you know that the answers you type are never going to be sent back to the author, this is a more demanding experience (if you take it seriously) than most games ever ask of you. (I suspect some people will disengage and type jokes instead, a real-life defense mechanism transported into the intimacy simulation.)

When I play tabletop storygames that go to dark or emotionally demanding places, there are rules of renegotiation, so that you can exclude subject matter you’re not ready for. And in a recent game of Monsterhearts, the GM had us talk out in advance what we were hoping to discuss in the game and where we were and weren’t willing for it to go. And that was really useful, both in producing a sense of safety and in allowing us to delve into some things that normally I might not want to roleplay. The end of that campaign was one of the most emotionally successful I’ve encountered.

Obviously it’s hard to transfer that effect into a pre-programmed computer game, but I felt as though Crossroads came closer — through its formal decisions — than most other things I’ve tried. The opening text establishes that you’re here for some extreme or painful reason; the choices allow you to negotiate which of several types of pain you’re interested in talking about. Some of the resulting stories spoke to me more than others, and some were more specific than others (and I tend to prefer specificity, on the whole).

A Figure Met in a Shaded Wood (Michael Thomet) makes an interesting foil for Crossroads: in Figure, you are a traveler who has a series of actions you can do over the course of the day, to do with gathering food and being kind or otherwise to people you meet on the path. Then you encounter a fortune-teller.

But to discuss more fully what happens here, I’ll need a bit of spoiler space.

Having your fortune told comes out badly: you receive a dark premonition about the future, which the figure then fulfills by immediately killing you. I guess predicting your death didn’t require all that many psychic powers after all.

Your inclination might be to replay. If you do so, you’ll unlock some additional options that weren’t there before, a bit like in Save the Date or various visual novels that track past endings. The conceit of Figure is that none of your past choices matter at all. You get the same fortune and the same outcome no matter what you do; the only change is that on second and subsequent playings, you can ask the figure about what is going on, and get a spiel about the things you’ve done so far in this playthrough and why they don’t matter.

There are plenty of other games where it doesn’t really matter what you do, and some in which the fact that it doesn’t matter is part of the point: Photopia and Grief both use this concept to illustrate the iterative thinking after a tragedy and the desire to revise the past; Rameses uses it to talk about the traps built into a personality; The Writer Will Do Something is about the inability of the writer to do anything because time constraints and studio politics and the reality of AAA development have that effect. But in A Figure in a Dark Wood, I didn’t see how the futility-play was illuminating any particular aspect of human existence. Things always came out the same because the author had declared that they should, not because this specific situation is one that offers a no-win scenario.

Or maybe it’s simply intended as a horror story: you’re trapped, no matter what you do! Ha ha! Not only that, but the Figure is playing a multiple universe Xanatos Gambit: we should see the figure not as one character in one playthrough and another in the next, but as a persistent character across all playthroughs, who has anticipated all our moves and is able to find some way to make all our plans fail.

If that was the intent, I think the pacing is a little off to make it really sell emotionally. What you get here is not a gradual reveal of a horrifying truth but a big thwack of exposition late in your second playthrough. Up until then I was still not quite sure what was up, but after that point I figured that further attempts are futile. (I made one more attempt anyway, but I wasn’t nervous any more, just verifying my understanding of how the game functioned.)

However, I did think it was formally interesting that the game is tracking all of your choices in order to go over your possible motivations later. The effect is a tiny bit reminiscent of the final debriefing in Walking Dead Season One, but the confrontation is as much between author and player as between character and protagonist. Here it works as a reassertion of the power structure, a reminder that the author is in control and that the player never really dictates where the story goes.

(Total tangent: Shaded Wood also caused me to imagine a fiction generator where the player starts by choosing a tarot card spread and then the generator creates a story fulfilling that fate.)