The 21st annual Interactive Fiction Competition is currently on, through mid-November. Voting is open to the general public; the only prerequisite is that you not be an author, not vote on games that you tested, and submit votes on at least five games. (You emphatically do not have to have played them all! In a year with so many entrants, it is very unlikely that most judges will get through anywhere near all of them.) 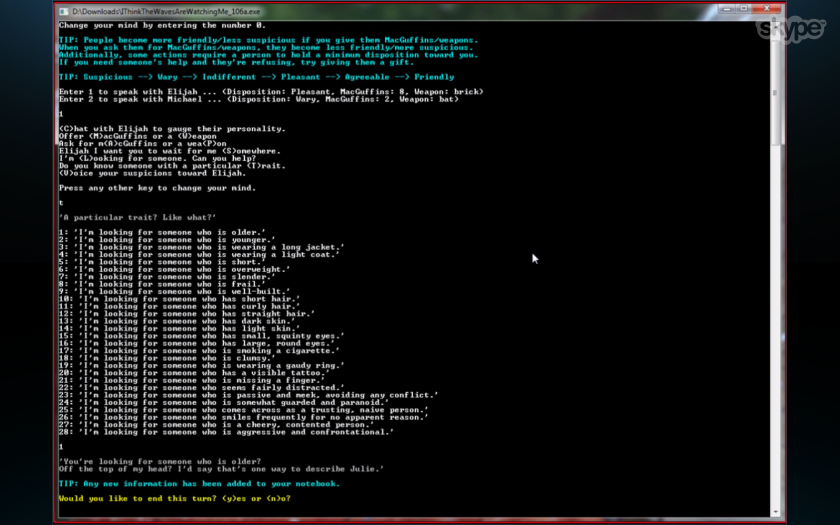 I Think the Waves Are Watching Me is a choice-based game with strongly procedural underpinnings: characters wander around an island of numerous locations, someone is committing murders, and you need to figure out who did it. But that description undersells just how weird this game is. There is a mystical talking rabbit and strange red lightning. It was not at all clear to me whether we were looking at a religious armageddon experience, or the closing down of a VR scenario, or hallucinations on the part of the protagonist, or something else entirely.

Special thanks go here to Prios, who on learning that I wasn’t able to play this game on my own system very kindly screen-shared the whole game via Skype. (Prios’ own views on this game are here, written before our play session.)

So, in full disclosure: I have a little bit of a soft spot for procedural murder mysteries. I’m not particularly obsessed with replayability — I loved Make It Good, which only has one solution and is the better for it. Rather, the idea of mastering a game that codifies all these possible alibis, weapons, and scenarios has an appeal entirely of its own.

In most of the procedural mysteries I’ve tried and/or written, though, the game works with the idea of procedurally generated clues. Someone is killed and the act leaves evidence behind, evidence that can help narrow down the killer’s identity. In An Act of Murder, there’s just one death followed by a stack of generated alibi and other evidence; in Mystery House Possessed, the characters keep getting bumped off, providing more and more hints in exchange for a worse and worse narrative outcome.

I Think the Waves Are Watching Me decouples the deaths from the mechanism of progress. You travel around this island you live on. The procedurally generated characters are periodically killed by lightning strike, which you nonetheless understand to be the result of someone’s personal powers. But looking at the corpses gives you no information.
Instead, you gain knowledge about the murderer through visions brought to you by the magical rabbit that turns up partway through the game. These visions tell you things like “the killer is older” or “the killer is energetic”, and you then have to match that information up with the list of character traits you’ve gathered about all the wandering NPCs.

There are also a few elements of more traditional puzzle design here: a few lock and key puzzles, a fuse that helps you light a dark location, a safe whose combination I never cracked. There are resources called MacGuffins that you can gather and trade with the NPCs as well, making them more favorably disposed towards you or bribing them to give you their weapons. And once you’ve figured out (or think you’ve figured out) who is responsible for the murders, you can accuse that person; but you’d better be armed and have at least one other NPC on hand who is friends with you, or there’s a risk that the confrontation won’t go the way you hoped.

Towards the end of the game, the island starts to be swallowed up by waves, which gradually remove locations so that you can no longer visit them. And if you’re lucky, the rabbit gives you a hint that you can use to escape from the island, even if it’s too late to conquer the guilty party.

Though I’ve described the story arc of my game pretty extensively, I don’t feel like these are really spoilers, because someone else’s experience could be extremely different. On this run-through, we unlocked two of the game’s “secrets” — the achievement equivalent — but there were at least half a dozen others that we didn’t get to.

This may sound odd, but at least for me, the compelling thing about this game is exactly how bad the protagonist is at solving the main mystery. We’re not getting any of the evidence ourselves, and in my playthrough I had extensive magic-rabbit help and still managed to screw up my accusations badly. And I don’t think this is just because I was bad at playing — though I might be able to do better on a second or third playthrough, I don’t know that I’d necessarily do a lot better. There just aren’t that many guaranteed ways to get the information you need. Meanwhile all the characters are running around uncontrollably and getting killed, and the tidal waves are starting to come in, and triggered events keep happening to ramp up the sense of urgency or just pure strangeness. The clock is visibly counting down and things are getting more desperate.

So I did feel motivated to do increasingly foolish things: visiting locations near the path of the tidal wave, exploring a spot even though I knew the killer was hanging out there, accusing people when I wasn’t a hundred percent certain of their guilt. And that fit with the behavior of the other characters, too. It was an island full of people aware of approaching doom, inclined to blame themselves or one another, and trying various drastic measures in the hope that something, anything, will make it stop.

One thought on “IF Comp 2015: I Think the Waves Are Watching Me (Bob McCabe)”