(Disclosure: the following review is the part of the IF Comp review trades. David Neal requested that I check out his work. I played a copy of Alicewinks that I bought with my own money; other work reviewed is available for free on David’s website.) 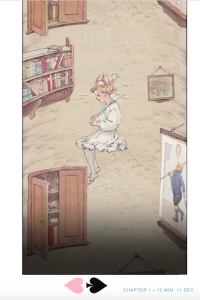 Alicewinks is an ebook version of Alice in Wonderland, read aloud and fully animated. The interactivity mostly focuses on mode of consumption: you can choose to read the text, flip through illustrations, or view the animations with audio — the latter option basically being a chaptered movie. The reading is pleasant to listen to, if a little less polished than some audio book performances.

The animations are made from illustrations out of many different editions of the book stitched together. The effect is a bit dizzying. Now Alice looks like a fairly young girl, and now she looks nearly grown; now she’s blonde, now brunette. Similar changes happen to the white rabbit. Sometimes the characters are made to walk or hop through a perfunctory animation of their limbs, not far off the style of Monty Python animations. Sometimes they’re squeezed or stretched to match up with elements from other illustrations. Sometimes they’re placed against backgrounds that have been upscaled or blurred to give them room for movement.

Though the individual contributing illustrations are often very beautiful, therefore, the juxtaposition and forcible animation of those illustrations is often unattractive or (at best) a bit hallucinatory. Given that it’s Alice in Wonderland, that’s not completely inappropriate. 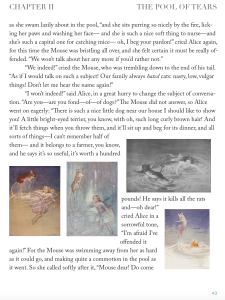 Personally, though, I preferred to see the illustrations without these animations by opting out of the video presentation. When there are multiple pictures for the same event, the text puts them next to one another. As a result, pages with particularly picturesque moments (like Alice’s encounters with a mouse as big as herself) are clustered with images, while other pages are almost all text. The text flow sometimes works and sometimes looks a little clunky wrapping around so many small pictures, but even just a quick flip through the pages is enough to distinguish the events that preoccupied artists. 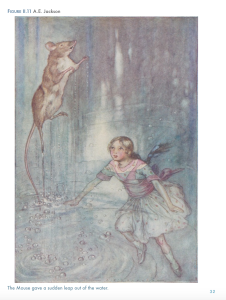 Even more fun, I thought, was to page through the attractive full-size reproductions, noting which elements were persistent and which ones came and went at the whim of the artists. The book is a collection of some really lovely classic illustrations, and it’s worth something in that regard alone.

Between the animations and the overall emphasis on these pictures, I felt like Alicewinks was trying for something it never fully attained, namely to offer a fluid exploration of the differences between these different illustration styles and artistic choices. What the ideal interactive art comparison app might look like, I admit I don’t know. Perhaps it would let the reader/player remix the art themselves. Perhaps it would provide a database letting the reader drill down into different types of images with different elements. (How many pictures are there with a bottle of some sort?)

Neal’s website also features a flashlight game using these same illustrations: the aim is to move a small circle of visibility back and forth over a mostly dark frame, searching for some object specified in the puzzle. I am not usually a great fan of flashlight mechanics, even when I otherwise like the game. Possibly here the idea is that, by piecing together partial evidence (“what am I seeing in this picture now? where are the major figures likely to be posed? who will be holding the pot of marmalade?”), the reader gains an interactive appreciation for the picture’s composition that might otherwise be missing.

In practice, I felt this was a fairly uncompelling. It is totally possible that small children disagree with me.

This requires a little bit of background, perhaps. Find Me, I’m Yours bills itself as “Click Lit”, and is a transmedia project in the sassy modern romance style, starring a 24-year-old woman with eccentrically painted fingernails and the hunk of her dreams. There’s an ebook you can buy, but the ebook also ties into a huge number of supporting websites. In contrast with the typical ARG approach, the websites are clearly labeled as part of the Find Me, I’m Yours story universe; and rather than hinting at sinister conspiracies or corporate coverups, they include sites for fictional shoe repair shops and ifckedup.com where fictional users have uploaded public apologies for unwise past actions. These websites themselves go quite deep, some of them containing bunches of additional content and videos.

I have not read Find Me, I’m Yours. The introductory video did not really appeal all that much: it suggested a rather thin quest arc in which the protagonist is seeking a guy she barely knows anything about in order to win him as a kind of prize. (I also didn’t like Sleepless in Seattle.)

I think it’s safe to conclude that David Neal didn’t like Find Me, I’m Yours either. Although “Don’t Find Me, I’m Not Yours” calls itself a parody, it might be closer to call it a review, since it’s often talking about itself in terms that seem to apply to its namesake:

This is not the story of a story, it is the story of a not a story. A fantasy of clicky-clacky. A seemingly unending series of saccharine (aspartame?, sucralose?) non-events interrupted by irrelevant imagery…

“Don’t Find Me, I’m Not Yours” is heavily studded with links to other websites, seemingly almost at random. The word “sucralose” there is linked to http://sucralose.org/; the word “saccharine” is linked to a youtube video. There’s a sense of free association. Possibly the links simply go to whatever was the first result of a Google search on a particular topic. In any case, the hypertext elements have become a distraction. They don’t serve as a gloss or elaboration on the text, but as ways to stop reading that text. Perhaps Find Me, I’m Yours commits the same sin.

6 thoughts on “Alicewinks and “Don’t Find Me, I’m Not Yours” (David Neal et al)”