It’s the fourth episode of the new revived X-Files season. Scully is keeping a sad vigil in a DC hospital. Mulder has been in Philadelphia working on a series of vividly gruesome murders. But he drops that and goes to the hospital and calls her from outside the ward and says just “I’m here.” — but it calls back all the times he was there for her before, and all the times he wasn’t, and it’s one more move in a very long game.

This is a couple that had one of the longest, most artificial Unresolved Sexual Tension arcs in television history, including multiple fake-outs from unrepentant writers. They kissed but it was only a dream. They kissed but it was a hallucination. They kissed (or nearly so) but one of them was really a shape-shifter or possessed/body-swapped by another entity. (That one happened multiple times.) They were about to kiss but one of them was coincidentally just at that exact moment stung by a hybridized bee carrying an instantly-debilitating alien virus.

And just when, as a couple, they were finally moving past that, Duchovny left the show, so Mulder and Scully’s relationship went into another kind of limbo where they never saw one another.

Then there was the second X-Files movie, of which defiantly I liked the first half. No one else liked any of it, as far as I can tell. The movie skipped any further will-they-won’t-they shenanigans and went straight ahead to Mulder and Scully as long-term cohabiting partners. And now, in the new series, they’ve come through partnership and lust and mortal peril and a child they had to give up, through living together and then not living together. They are in another place now, a place that television rarely visits and where video games pretty much never go at all.

If you’re thinking that this doesn’t sound like a very well constructed show, I hear you. The writers have quite a bit to answer for, and I haven’t even gotten into how silly and inconsistent the main plot arc is. But back in the day, I used to watch it because I found Scully riveting, especially after the first couple of seasons when she stops seeming quite so nervous to prove herself. In her self-containment and determination, I saw a rare model of how to be a professional adult woman with a partially technical job. She wasn’t a Stone-Cold Female Executive, and she wasn’t defeminized or dehumanized by her nerdy knowledge. She also wasn’t doing all the emotional labor, bringing brownies to the FBI building or listening to the woes of other agents. She had connections and relatives and feelings, but also boundaries and agency and ethics. She could perform femininity but she didn’t seem to be trapped by it. And for all the tension with Mulder, for all the times she was in mortal peril, she was never, ever just the girlfriend or woman-in-a-fridge or a prize for anyone. She seemed lonely — I always wanted a larger community than Scully seemed to have. But in a lot of other respects, when I pictured what I wanted for my future self, I pictured Scully’s assurance, her absolute competence, her combination of empathy and self-preservation.

Now that she’s older and I’m older too, she’s even more of a rarity on TV: a woman who is allowed to be, and appear to be, over 35; a woman with a functioning and evolving professional life; a woman in a relationship with strata.

There are so many good stories to tell about relationships with some history. The stakes are higher than the stakes of a first crush; there’s all that context to add meaning to the interactions. The characters are invested in each other. And relationships between older people typically have involve juggling other responsibilities and commitments — jobs, children from previous relationships. 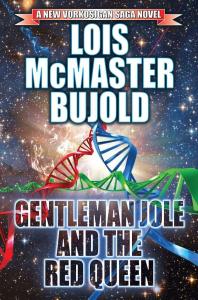 Gentleman Jole and the Red Queen

is book 17 in Lois McMaster Bujold’s Vorkosigan saga. It concerns a couple of characters who have known each other for decades, who have a past beloved in common. The “red queen” of the title is Cordelia Naismith Vorkosigan, former starship captain and now Vicereine of Sergyar. She has lived through war and political plot and regency and raising two of the most alarming sons any mother could imagine; she has outlived her first husband. She is 76 years old when the story begins, and trying to decide a new direction for her life. In doing so she has to renegotiate her professional and family identities, to redefine herself against all the systems she’s been part of up to now. Every decision, however personal, has ramifications all around her.

Or, less about politics and community and more about two-person systems, there’s Playing by Heart, one of those romantic comedies with multiple couples. The best story in it is the story of the characters played by Sean Connery and Ellen Burstyn, who are celebrating a major anniversary well into a marriage with grown children, coping with serious illness, and meanwhile re-litigating an emotional affair that took place many years earlier. (It also has Gillian Anderson in it, rather disorientingly romanced by a pre-Daily-Show Jon Stewart. But never mind that.)

Too pop-culture? Take the Globe’s staging of Euripides’ Helen a few years back, in the Frank McGuinness reworking. The premise (as in the original Greek) is that Helen of Troy never actually went to Troy: she was always faithful to her husband Menelaus. What went to Troy, — what launched the thousand ships and started the ten-year war — was an eidolon, a simulacrum made by the gods in order to cause squabbling among the humans and decrease the surplus population of the earth a bit. Helen herself has been whisked away to Egypt, where she waits, unable to undo the horrors that are happening under her name. And then on his way home from the war, Menelaus stops by Egypt and finds his real wife.

In the Greek this story has always seemed to me to be mostly an indictment of the vicious cruelty of the gods who would play with humanity in such a fashion. Menelaus himself is kind of a buffoon, entirely dependent on Helen’s wits to help him escape Egypt again. (The local powers aren’t entirely friendly.) As staged at the Globe, it had a different emotional core: the joy, the incredible relief, Menelaus felt at discovering that the person he loved most had actually never betrayed him at all. He had not been taken for a fool. He had not been wrong about their former feelings for each other. He had not misread Helen. And she, once the center of his life, was still the good person she always had been. It was a miraculous restoration of faith.

There were a couple teenagers next to me in the audience for this, and they looked unimpressed; maybe you have to have taken a few hits to understand how much relief there is in healing. I thought it was one of the most moving things I’d ever seen.

Lately there’s been a lot of very reasonable critique to the effect that video games screw up romance when they make sex the goal and the end-state, and that they create a sense of entitlement when they build the idea that all NPCs are player-sexual and achievable with the right set of moves. (Matt Boch’s GDC microtalk from last year; Kate Gray at the Guardian.)

But just as sex doesn’t have to be either a guarantee or an endpoint, a love story does not have to begin with the characters’ first meeting. It does not have to be about whether or not they fancy one another. It can start well into their acquaintance, even long after they have gotten together for the first time. This is something that romance novels have known a long time, to judge by all the series based on the premise of old flames re-meeting after a long separation.