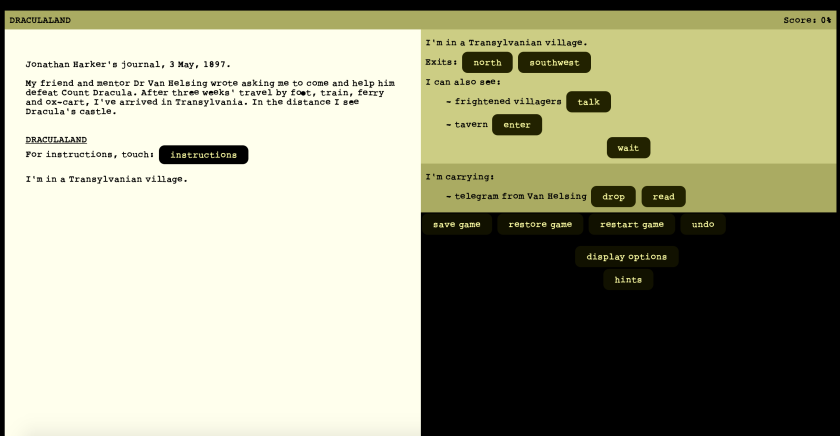 Draculaland is a goofy, tropey piece of medium-length IF: you solve puzzles, you gather weapons, you fight monsters suitable to Transylvania. There are items to collect, and NPCs who send you on quests, and other NPCs who get in your way; there is even one NPC who follows you around. The whole piece feels animated by the spirit of Scott Adams, especially The Count — short, tight descriptions and puzzles that can be solved in a single flash of inventiveness — but it is infinitely fairer. I estimate it took me about 90 minutes, though I think I wasn’t consistently focused on it for that full time. Draculaland was written for The Ryan Veeder Exposition for Good Interactive Fiction, an unusual competition with the sole purpose of entertaining Ryan Veeder, but happily the author has made it available for the rest of us to enjoy as well.

It’s sort of a parser game without the parser: you play by clicking on verbs associated with the various objects in scope.There’s a full parser world model going on under the surface, and the links are being generated procedurally by that model. Occasionally this provided puzzle hints I wouldn’t otherwise have thought of, but mostly this eliminated guess-the-verb experiences without taking away the fun of coming up with my own solutions. Most of the puzzles require you to think of combining objects that appear in different locations, so the experience isn’t over-obvious.

It’s not exactly the first game to experiment with building clickable links out of a parser model world — see also Jon Ingold’s Colder Light, for instance — but there aren’t a lot of examples out there that I think work really well, so I was glad to play this one, and I thought that it did essentially work. Certainly it felt a lot more successful to me than a lot of historic UIs that use drop-down verb menus and other doodads to augment a standard parser game. Things like this Spellcasting UI have, to my tastes, aged much worse than even bare-text parser presentations.

Towards the end of the Draculaland, the inventory list gets maybe a little unwieldy. I also found myself wishing for a clickable map, though I’m not sure whether that would actually have been an improvement or whether I was merely wishing for it because I manage to mix up east and west even in a clickable parser game. But for the most part, it worked very well for me.

The writing is compact, as it has to be in this format, and funny; the characters are sketched with as much personality as one could reasonably fit in the available space; and I found myself rather pleased with how the ending turned out, more for the sake of the NPCs than for myself.

If you like Draculaland as a tribute to Scott Adams, you might also enjoy J. Robinson Wheeler’s Adams-styled Greek myth game ASCII and the Argonauts; if you’re keen on puzzly vampire tropes, you might want Marco Vallarino’s Darkiss. If vampires sound good but you want to stick with a choice-based interface and go more Rice than Stoker, there’s always Choice of the Vampire.