Based on feedback, I’m experimenting with a twice a month approach to link roundups. I’m hoping this will mean each individual post will be less overwhelmingly long, and time-sensitive things will be fresher.

This is only semi-IF-related, but there’s an event in San Francisco for enthusiasts of roguelikes, 6:30 PM, May 17. The talks include some discussion of procedural generation and narrative, so might be of interest to some here, though.

And, of course, Feral Vector is still upcoming: Hebden Bridge, Yorkshire, June 2-4. It will be fun. I will be talking.

If you liked the sound of Enter the Oubliette and you’re in range of Brixton, you’ll want to get tickets and go as soon as possible: the site is closing in another four weeks or so. Here’s Exit Games UK talking about the game and its closure, and a fuller discussion of why they’re closing over on their Kickstarter page. The short version is that their landlord has changed his mind about letting them renew the lease, and they don’t have a good place lined up to move to. Which is a shame — it’s a really fun experience. Here’s hoping they find another venue.

Bard Jam in April produced six works of Shakespeare-related IF. I haven’t had time to check them all out, but I was amused by David T. Marchand’s Armando the Bardo, which among other things uses some real-time effects that I don’t typically associate with Twine: for instance, there’s a guard character you have to sneak past when he’s described as looking the other way.

From Ryan Veeder, we got An Evening at the Ransom Woodingdean Museum House, a creepy parser game in which the protagonist is a docent at a historic home. It’s less silly and more scary than average for Veeder; and, as is often the case with Veeder’s work, it tosses in a bunch of elegant design tricks so casually that it would be possible to miss that anything virtuosic just happened. I’d really recommend this to people who are thinking about how to build a sense of dread in the open space of parser IF. The pacing of revelations, the use of light and darkness, the gradual changes in narration are all great. But An Evening is not played just for horror; it’s also a meditation on our relationship to the past.

The game comes with a link to a rainscape you can listen to while you play, and I recommend using this.

Alexander Systems (Darusha Wehm for Sub-Q) is a Twine story of dystopian work, punishment, and solitude. There are quite long passages between choice points, and the first few screens end with a single link-to-continue — the pacing feels rather different from the Twine average — but the prose is assured.

Starship Adventures is a new collaboratively-written ChoiceScript game, coordinated by Felicity Banks and including writing by a number of other authors:

You’re a naturally heroic and quick-thinking space captain flying a starship from world to world while keeping your hair groomed to perfection. It’s your duty to keep the engine running, the scotch flowing, the crew happy, and your outfit looking fabulous. There’s carnivorous flora, deceptive aliens, space anomalies, horrifying creatures, and too many arch enemies to keep track of them all! Can you survive?

Enchantedonsequel and Christyonsequel are two conversational games involving dialogue with a fictional character via Facebook, played on Facebook Messenger and “powered by Sequel”. These are adaptations of work by Felicity Banks and Joey Jones, originally available on other chat apps.

Mark Marino (of Living Will and the Mrs. Wobbles series) and Rob Wittig have also done a project with Sequel, which Mark describes thus:

In Baby Seals, Spencer and Heidi are drawn into a new Reality show in which Spencer gets to do fake Special Ops — unless they’re real.

My initial impression is that the interface, universal to all of these games, is a little on the clumsy side — Lifeline-esque choice-based interactions like this: 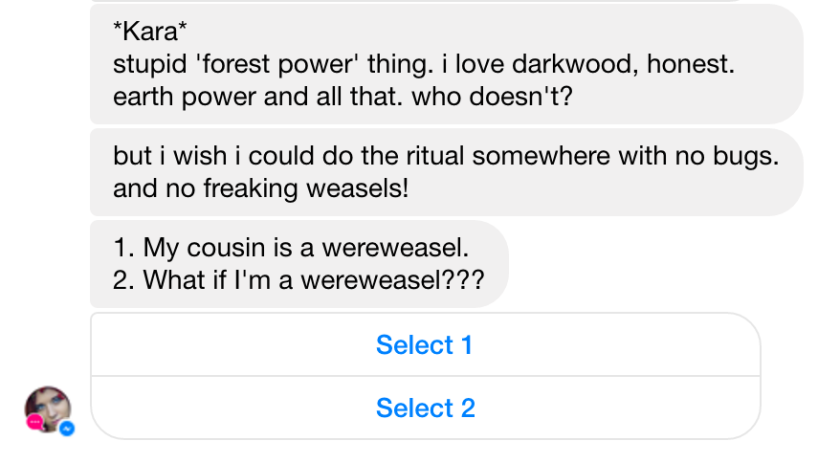 …where the selection isn’t even about clicking the choice you want to make. Still, it’s interesting seeing various commercial attempts to do IF in the chat space. There are also times when you have only one option to select, and the UI makes it pretty unclear that it even is supposed to be your dialogue, rather than just a tap-to-continue after the previous person’s monologue. For instance:

Here, context makes it clear that we’re selecting the (lone) option to say “I won’t,” but visually it’s not distinct from Spencer saying “I won’t!” and the protagonist doing a continue action. Then, too, the system doesn’t always cope gracefully with even a fairly brief distraction from the game. At one point I set Spencer aside for a moment to type up some notes — a pause certainly shorter than pauses that appear naturally in online chats in general, let alone a gap of hours — and when I returned and tried to pick an option, I got this:

So it’s not entirely smooth or graceful yet, I’d say, and I already consider Facebook chat/messenger to be the Most Annoying Way To Chat (TM). That said, this is an accessible way to do Lifeline-alikes.

For my taste, this kind of game is immensely dependent on the appeal of the character you’re conversing with: during the time I played (which was not the full game), Marino and Wittig’s reality-show star Spencer reminded me very accurately of certain Hollywood-peripheral people I know in LA, and this kept things entertaining. Pieces with a less-strong protagonist voice might struggle to make the format work.

As Spring Thing and the Ryan Veeder competition are over, it’s now the season for the flourishing of IF post-mortems, where you can find out what authors did and why. Recently published post-mortems include:

Meanwhile over at spooky action at a distance, the crossover IF/SFF review site, Arkady Martine writes about voice and cohesion in Birdland, and then the site also has a great interview with Brendan Patrick Hennessy about the writing process, touching on everything from Twine tech details to the experience of reading loads of lesbian YA novels to get a grounding in the genre.

Selling IF and IF-adjacent writing

It’s worth reading Harry Giles’ essay on selling Raik, which includes sales figures, information on time spent and pricing approaches, and some thinking about the state of artgames funding.

Cartridge Lit seeks fiction and poetry about, or set in the world of, video games.

Spring Thing is now over, with ribbons going to Tangaroa Deep and The Xylophoniad. If you missed the excitement, there are some additional reviews available now: from Robin Johnson, or from any of the several reviewers listed on the ifwiki page. You can also watch Lynnea Glasser Twitch-stream the games or check out the transcripts of some of the parser selections on ClubFloyd, where IF players go through the games together and comment. (ClubFloyd isn’t as well equipped to play hypertext games.)

Robin Johnson announces the Year of Adventure in honor of the 40th anniversary of the Crowther and Woods original:

a year-round, free-form, non-competitive jam for games inspired by, paying homage to, or otherwise related to Adventure or other early works of IF, running from now until the end of 2016.

Or if that’s not your fandom, perhaps you’ll prefer the Discworld Open Jam, running through July 28, for works inspired by Mr Pratchett.

Meanwhile, this IFDB poll invites authors to nominate the work of theirs they think is most underrated: personal favorites passed over by readers or perhaps not enjoyed as much as they deserve.

Further in the future, and more academic, but of possible interest to procedural text folks here: in September in Edinburgh there will be a workshop on Computational Creativity and Natural Language Generation.

Melissa Ford has released Writing Interactive Fiction with Twine, available as an ebook or in hard copy. Chris Klimas tech-edited it, and has a post about the book and the editing experience.

ScholarsPlay is a Twitch channel that features commentators from UC Santa Cruz playing and discussing games. Their Firewatch video features Aaron Reed as a guest commentator, and gets into a lot of topics around story.

Not new this month, but new to me: I liked this Script Lock podcast with Ian Gil and Anna Kipnis, which among other things talks about how games can address cultures that are less familiar to us. They use the examples of Dear Leader and the USSR, and Never Alone with Alaskan Native culture. The podcast includes really neat specific details here about how game mechanics did or did not fit well with particular cultural and spiritual beliefs. There’s also bonus discussion about 80 Days and Crusader Kings 2, among other things.

Also new to me, here is Sergey Mohav’s talk from nucl.ai last year talking about using a chatbot for narrative functions in the upcoming game event[0].

And if you like conversation about respectful representation of cultures, you might also like this Failure Workshop talk from GDC 2015, Ben Esposito talks about the decision not to use Hopi imagery in Donut County.

Bookish Blether is a podcast mostly for readers and about books, but this episode includes an interview with Hannah Flynn of Failbetter Games about interactive fiction. The interview portion of the podcast starts at around 18:00 and touches on Fallen London (of course) but also other examples including 80 Days and With Those We Love Alive.

If you enjoyed my post on card-deck narratives, you might like this interview with Jedediah Berry, author of The Family Arcana, in which he talks about his creative process, electronic and physical interactive projects, and the press he founded for stories in unusual shapes.

Other projects by IF folks

Adam Cadre’s Lyttle Lytton contest for bad prose is in its 16th year, and recently announced its latest slate of winners.

One thought on “Mid May Link Assortment”