Peter Mawhorter is an academic who looks at how choices work in interactive narrative, elaborating a theory of choice poetics. His articles offer some taxonomies and vocabulary for talking about choice design — with partial, not complete, overlap with IF community terminology for these topics — and he has built a system that procedurally generates new choices from scratch.

In this post, I’m looking at three of his articles and offering some thoughts of my own, but all three are linked and accessible without a paywall, so if you find this interesting you can read the originals. This is part of a series in which I’m looking at academic approaches to interactive fiction and related topics.

Towards a Theory of Choice Poetics (Peter Mawhorter et al) sets the stage for later work and argues that there is a field here worth looking at. As the title would suggest (“Towards…”), he’s not advancing a completed theory himself here, but pointing out some of the factors that would go into such a theory. The article is thus mostly a set of annotated lists: of player motives in choosing options in a game; of play styles; of choice structure styles, as defined by the outcomes of the choice; and “dimensions of player experience”, which I found at once the most interesting and most slippery of his groupings.

He is careful always to point out that these category lists aren’t, and don’t expect to be, complete.

He starts by anatomizing choices, breaking them down into framing (what comes before the choice and helps us understand what it’s going to be); the choice option texts themselves; and outcomes. Relatively straightforward so far — but I’ve seen some breakdowns of choice that don’t look enough at the framing of choice, so it’s useful to have that called out. 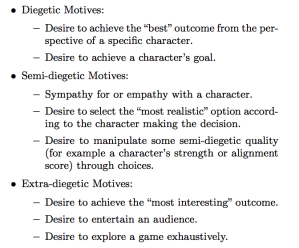 Next, the article looks at reasons why the player might make a given choice, breaking these out into diegetic, semi-diegetic, and extra-diegetic motives. This split of reasons mostly correspond to a split between (in roleplaying parlance) in-character and out-of-character motives.

Choice types, meanwhile, include examples like “blind choice” (the infamous “go left or go right” choice where the player has no framing information to establish the stakes of the choice; “false choice,” where it looks like there’s going to be a branch in the narrative consequent on your action, but in fact there isn’t; “dead-end option,” which others might refer to as “instant death” because they bring the story to an immediate end; “dilemmas” as opposed to “flavor choices”; “unchoices” where you have only one option; and choices with delayed consequence, which he suggests is a deprecated design strategy. (Not by everyone: Choice of Games makes heavily use of delayed branching, but mediating that via stats.)

Finally, the player experience types. He identifies agency and influence (the latter being the player’s ability to affect story outcomes whether or not they know in advance what they’re doing — perceivable consequence, whether or not there’s any intention); autonomy, or the player’s ability to pursue their own goals within a game (and this one I think depends on factors that go well beyond the structure of individual choices); identification with the protagonist; transportation and absorption, which are subcategories of our old friend immersion; responsibility and regret, which relate to the idea of complicity.

Mawhorter’s ultimate goal in all this is to understand the structure of choices well enough to autogenerate them towards particular effects — but even if that procedural approach doesn’t appeal to you, it’s interesting to look at the categories he’s outlining.

“Choice Poetics by Example” (downloadable from Research Gate) builds on that earlier work by applying Mawhorter’s analytical tools to two specific examples: Undertale and Papers, Please.  This is a longer and more detailed article, and I will not attempt to exhaustively summarize it here; indeed, many portions of it are devoted to formally mapping out different options in these games and how they correspond to potential player goals and styles of play.

That’s not to say it’s without interesting conclusions. Mawhorter observes choices that have multiple expected outcomes, some good and some bad, together with different levels of certainty about what the player can expect:

This comparison thus illustrates exactly how Papers, Please (and governments) can manufacture complicity: by introducing doubts about the motives of strangers while emphasizing the certainty of outcomes for loved ones, a dilemma that clearly warrants serious moral concern can be transformed into an uneven choice where multiple avenues of justification are available. (12)

Admittedly — and indeed Mawhorter does admit this — his conclusions line up pretty well with existing critical analysis of these works. But, he suggests, having a formal method that uncovers those points provides more tools of understanding.

Personally, I found this paper most interesting when it was grappling with situations where choice outcomes were uncertain, and how players reacted to facing that uncertainty. There are a lot of ways to heighten or collapse uncertainty around particular choices, based on both framing and user interface.

For instance, I found myself contrasting the ambiguous situations outlined in Papers, Please with the typical branching options in Fallen London, where the player is explicitly told how likely it is that a given attempt will succeed:

Phrases like “A chancy challenge for your Persuasive quality” quantify the uncertainty the player is facing. In the early game, typically it’s possible for the player to grind other tasks and improve their stats in order to reduce that uncertainty before going ahead. That isn’t always the case in some of FL’s later content, where story arcs are longer and more coherent, and the player may reach situations where they can’t back out of a choice and return to it later. So those later scenes often provide a better example of high-stakes situations with significant uncertainty about outcomes.

Of course, there’s a difference between uncertainty whether an attempt will succeed (modeled here in Fallen London and in various other systems), and uncertainty about what success means, which is closer to the situation in Papers, Please. In the latter case, the player is choosing whether to assist certain people without being certain whether those people are genuinely refugees.

FL might in that sense be more analogous (in a way) with Undertale, where the player might or might not have the gameplay skills to execute a particular strategy. Mawhorter explicitly declines to consider the player’s knowledge of their own skill as a factor when analyzing Undertale choice selections (7), but that factor would make some outcomes more and less likely on a per-player basis.

Choices that could be approached by players at different skill levels (whether that’s actual performative gameplay skill, or different levels in a stat) are choices whose likelihood of success will be more known to the player than to the author at the time of writing. If the player has the option to back away from a choice and come back later, these moments also allow for an extradiegetic decision on the player’s part: do I care enough about succeeding in this trial that I’m willing to go away and read a walkthrough, grind a stat, or practice my shooting skills before resuming? Conversely, committing to a high-risk choice at a high-stakes moment is, for some players, a way to play for maximum drama, and one might want the outcome text to reflect the nail-biting nature of that interaction.

The question of how players justify their own decisions is also worth digging into further. Mawhorter’s choice poetics taxonomy doesn’t account for reflective choices, or perhaps would relegate them to the category of “flavor choice.” But judicious use of reflective choices might help to collapse, or to clarify, the ambiguous rationalizations that players are using to explain their own unethical behavior in Papers, Please (at least according to Mawhorter’s analysis). (That might not be desirable, but it would be interesting from the point of view of Mawhorter’s theory to investigate how reflective choices function in this case. Do players feel more comfortable with their self-justifications, or less so, if they’re able to say explicitly what their goal was?

The more generative possibilities of Mawhorter’s choice poetics turn up in Generating Relaxed, Obvious, and Dilemma Choices with Dunyazad. Dunyazad is a system for creating choice clusters and texts, based on an understanding of what the player’s goals might be. In this case, it’s creating choice groups intended to fall into each of the three above categories (relaxed, obvious, and dilemma) which Mawhorter defines thus:

• For “obvious” choices, there should be exactly one option which “achieves” a goal and does not “fail” any, while no other option should “achieve” any goal, and all other options should at least “threaten” a goal.

• For “relaxed” choices, each option must at least “enable” or “achieve” a goal, and none may “threaten” or “fail” any goals. Additionally, the stakes should be low.

• For “dilemma” choices, all options should “threaten” if not “fail” a goal, and those goals should all have the same priority. No option should “achieve” any goal, and options that “enable” a goal must also “fail” some goal.

In order to set up the choices so that there’s clear information about goals and likely outcomes, Dunyazad is using a system where the player has RPG-style skills, those skills are specifically called out in the option text, and none of the option texts are called out to the player by particularly punchy writing or humor. Human-written option text often makes one of the options a punch line, and players tend to be drawn to those — but it is trickier to emulate that effect in a generative system like this.

Similarly, a lot of systems used for choice-based IF currently are quite a bit more ambiguous than this about what’s going on under the system: for instance, Choice of Games very much uses stats and potential failures similar to this, but the option text is rarely written to be that clear about which skill is being deployed. And, notably, Dunyazad’s output is all different in kind from the ambiguous choice-structuring that Mawhorter analyzed in Papers, Please.

Aside from its intrinsic interest, this article also provides a good survey of related experiments by other researchers in automatically generating choices in order to produce particular player experiences and outcomes. This includes a brief discussion of Yu, H., and Riedl, M. O. 2013, “Data-driven personalized drama management,” in which the player’s choices are being designed on the fly to maximize their appeal to this particular player.