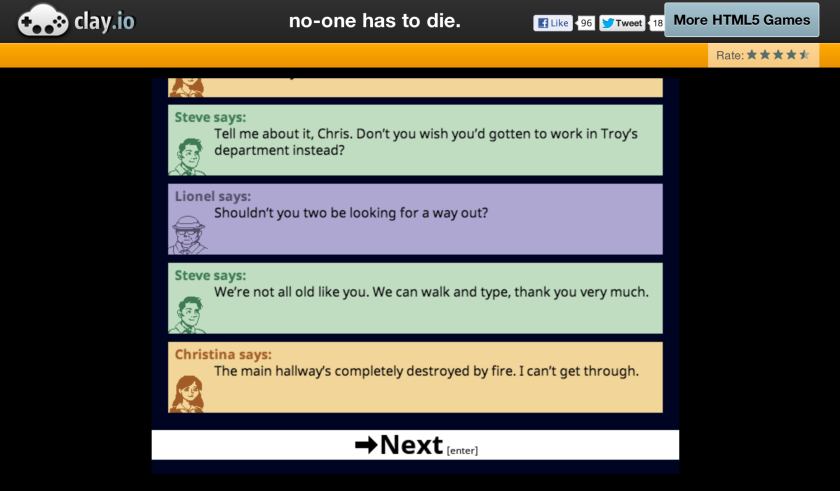 No-one Has to Die is a fairly easy puzzle game, framed with a textual story about time travel, secrets, revenge, and family loyalties. To my taste the puzzles are a little too easy — there weren’t that many serious “aha” moments for me — but the structure is clever, as puzzle solutions require you to experiment with which characters you’re willing to sacrifice, and understanding the story fully requires working through several variant possibilities. As to the writing, it could have been both briefer and more effective; character dialogue is very on-the-nose, and they argue exhaustively about who should be saved next and why. (Contrast all the long-winded, sterile argumentation about who should be saved here with the sparer and much more moving writing in Hide&Seek’s James Bond game.)

What’s most interesting about No-one Has to Die is the structure: puzzles used to represent significant and morally charged decisions, inventive reuse of the same puzzle levels with slightly different parameters depending on the time-travel, etc.

Alan DeNiro’s Corvidia is a brief, surreal piece in Twine, more interactive poetry than story. A man looks at a tree and sees… well, it’s hard to explain, really. Due to some CSS work, the linked words appear first, and boldest; the rest of the words, the sentences that give the links context, fade in slowly. It’s a fitting effect given that “Corvidia” seems to be describing someone fixated on a few particular images or ideas (the words linked), with only a vague and fantastical notion of what’s going on in the rest of the world. Or maybe what he imagines is true, but in that case, he lives in a universe very unlike our own. 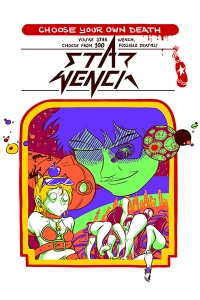 is a Choose Your Own Death book by Anna Anthropy. Not Choose Your Own Adventure, because (aside from the whole trademark issue) you don’t get to pick what leads up to the death:

How does the story end? Only YOU can find out! Your one choice: which page to open up to. Keep reading until you’ve suffered not one but MANY terrible fates.

The genre is lurid pulp SF, the same sort of thing parodied in Leather Goddesses of Phobos and in Anthropy’s Twine adventure The Hunt for the Gay Planet. The endings conform to genre expectations: you spend a lot of your time being tied up, or sacrificed, or eaten, or made the slave and plaything of the sinister Queen of Space. Endings are no more than a page long, in large type, though a few are doubled up with line-drawings by guest artists. Many of the endings are solid ultra-short stories in themselves. Others imply things about the story that must have led up to this point, or play on CYOA or genre expectations. (If you read ending 1, you get a stern telling-off about reading non-linear narrative in a linear way.) There’s no narratively meaningful agency, since you’re really only picking an ending by number — it’s not like you get to make in-context choices for your protagonist — but that fits as well, celebrating the arbitrary nature of both pulp fiction and old-school CYOA books.

Entertaining, if not especially work-safe.

Castle of the Red Prince is parser-based gothic horror IF by CEJ Pacian. Lots of Pacian’s past work in some way sets aside a standard aspect of the IF world model: Gun Mute puts the player on a linear forward/back movement track, Walker & Silhouette can be driven largely by keyword, Rogue of the Multiverse uses auto-generated grids of space for its exploration sequences. “Castle of the Red Prince” participates in that tradition by eradicating the usual distinctions of IF space. Everything in the game can be interacted with at any time; if you try to put an object in a container many rooms away, you will move there automatically. You can look at any place on the map, any room, at any time. If you’ve ever seen something, it remains in scope for you to refer to.

The protagonist is a student of arcane arts who is able to gain new knowledge in sleep and who first came to know of this place through dreams. There are some characters, but we so easily move in and out of their space that it’s hard to feel they are equals of the protagonist, or that we’re really in any kind of ongoing social context with them. Because there’s no need to remember directions, I didn’t build up a strong sense of relative space, of where things were in comparison with other things. I also found that the lack of local description unmoored me a little, because I’m so used to moving through rooms and LOOKing if I think I might have missed something. That’s probably just my IF-playing habit fighting against the new mechanisms, though.

Narratively, the surface story is fairly trivial — collect needed objects, solve a couple of puzzles, have minimal personal investment — while the backstory remains complex and largely mysterious. There are hints of significant past battles, of entities both evil and Faery, of generations of heroes trying to put things right, but only a few outlines of their struggle become clear in the course of the game.

The whole game, therefore, feels a bit gauzy and distant, reminiscent of Ebb and Flow of the Tide or The Guardian. There’s something intriguing and pleasurable about it, and I enjoyed seeing the experiment in IF world model, but it wasn’t a very intense or compelling experience. I am likely to remember Pacian’s other work longer.

The Pulse Pounding, Heart Stopping Game Jam was a weekend-long game jam for dating sims, producing over 80 works, many in Twine, about dating or relationship situations.

Among the entries (and obviously, with 80+, I didn’t get to try nearly all of them):

Porpentine’s “UNTIL OUR ALIEN HEARTS BEAT AS ONE” is a two-player Twine game about communicating through symbol and image.

Mattie Brice’s “Blink” tells the story of dates that go wrong, over and over, in several different ways. If there’s a way to make things go right, I never found it. Possibly that’s the point. Possibly I’m just bad at these sorts of dates.

Joseph Miller’s “Dating Folksims” is a series of rules for live-action games to be played around the idea of dating faux pas and successes.

Mike Joffe’s “Benthic Love” explores the dating options of a young male anglerfish. It is surprisingly touching and also contains a surprising number of biology facts.

Elizabeth Sampat and Loren Hernandez’s “How to Be Happy” is a rather grim metaphorical puzzle game in which you can try to find other blocks to fit with your own, but are likely to fail, sooner or later, in keeping them with you.

Leon Arnott’s “Dining Table” is a creepy story about the dating lives of dolls. The end is, I think, a little overexplained, but the premise is genuinely disturbing; my main complaint is that I might have liked to see more of the story told interactively rather than through straight exposition.

Valentine’s “Greek Mythology PPHSJam game” is a Ren’Py piece that lets you cavort with various gods, though I’ve yet to find an outcome that was really positive for me. Hermes became my dating wingman, though, which has got to be worth something.

wattomatic’s “Life on Hold” is a Depression-Quest-like exploration of a relationship in a messed up holding pattern, where the more options you get, the less you seem to be able to change anything really important about the protagonist’s lifestyle.

Leigh Alexander has also written about the PPHSJAM here, with notes about some of the games that I didn’t cover myself.