Fallen London has some new content for Halloween, and as I haven’t been back in a while, I headed over to check this out.

Fallen London has changed a good bit since I last spent significant amounts of time there. Some of the more grindy bits now let you just pay a larger number of actions all at once (5, often) in order to get an immediate effect. The Bazaar has new goodies in it that I haven’t seen before. The game of Knife and Candle has been completely redesigned.

What really excites me about “Hallowmas”, though, is that they’re trailing some of their end-of-story content, and also some in-game tie-ins to their forthcoming, much-anticipated Sunless Sea. I’ve been curious for a long time to see how they wrap up some of the strands of this story, especially since what I do know about it is pretty awesome. 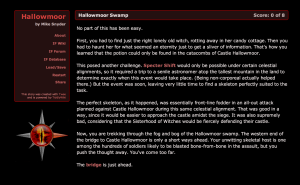 Mike Snyder released a Twine game for Halloween, Hallowmoor, about an epic battle between witches and skeletons in a fantasy kingdom. I haven’t finished it myself, but it’s substantial and highly polished. It’s also an interesting one for people who care about the formal relationship between Twine and parser games, since it’s got a bunch of features — a dynamic, updating map; a compass rose that shows exits; an inventory with usable objects; state that tracks the location of NPCs — that I associate more with parser pieces. There are also definitely puzzles, including a clever body-swapping mechanic.

(Full disclosure: I’m stuck about halfway in, at the moment.)

Ectocomp is a yearly IF competition with games written about a Halloween theme, with three hours or less allowed for development time. This year there are a startling twenty-four entries, many from authors you may already have heard of.

So far I’ve only had a chance to try a small handful of them, but there are some entertaining bits here, and most will only take a few minutes to play. 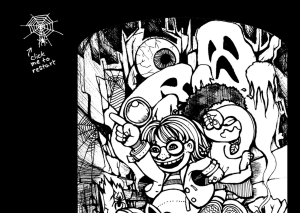 Anna Anthropy has a CYOA out called a very very VERY scary house. It’s highly-branching, low-state stuff, telling the story of a couple of pre-teens breaking into a suspicious mansion, in the spirit of early CYOA haunted house books crossed with Encyclopedia Brown. (Also, as far as I can tell, family-friendly.)

4 thoughts on “Halloween IF”