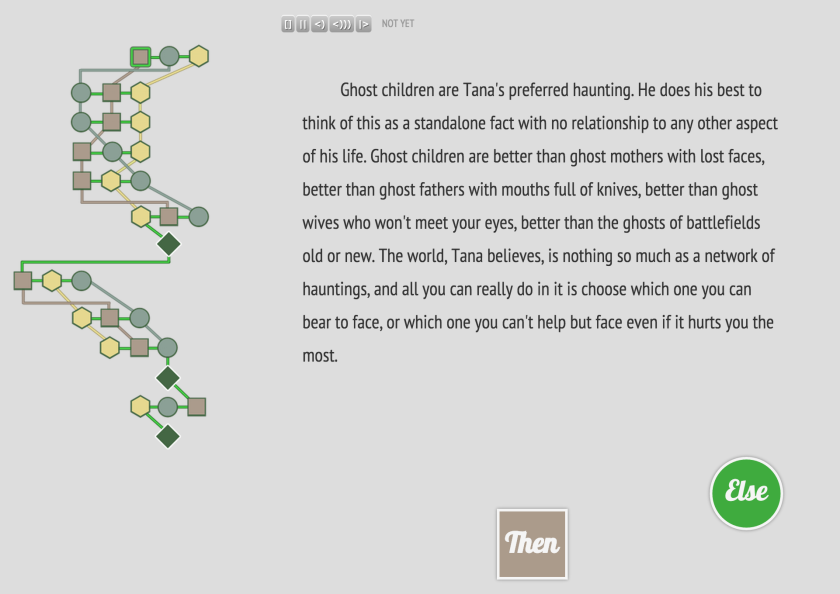 Snake Game is the first new story at Sub-Q Magazine, written by a veteran speculative fiction author turning to IF for the first time. It tells the story of a man who has left the army and returned to his father’s home in the jungle, where the wife he barely knows waits with his young daughter. The story concerns his relationships to all of them, the things we pass down through generations, the way our parents can confuse us about our own identities, and several other things as well. Chandrasekera is Sri Lankan, and I had the impression, though I could be wrong, that the non-fantastical elements of the setting are drawn from his homeland.

Snake Game challenges categorization. It isn’t really choice-based fiction since the player is never making choices for the protagonist, nor does it quite seem like “dynamic fiction”, the term Caelyn Sandel uses for her linear but interactive Bloom. Instead, it is a navigable fiction.

Most of the incidents in the story have three alternate versions, and the reader can choose whether to slither forward through the story or whether to move sideways, considering alternate interpretations and understandings of what is going on. The options — forward, sideways left, sideways right, backward — match the four directions one can take in a game of Snake. Nonetheless, the events are still consistent enough that however much we might turn aside from a moment or an interpretation we dislike, some truth remains truth.

Each of those incident pieces runs medium-long for a text passage in IF — many are a page or more of screen text. Several can be expanded further with a magnifying glass link that adds more detail.

Snake Game is also a work of speculative fiction in genre, far more so than most traditional IF. It expects that part of the interest of the fiction is imagining a world that runs on rules not found in our own universe, and that the reader will be constructing this world in her mind as she reads, piecing together clues about how life goes here.

In contrast, a lot of traditional IF is set aboard space ships or in wizard castles, but relies heavily on tropes that make these places familiar rather than strange. I can think of a few exceptions, of course, though they’re mostly choice-based pieces and mostly written by people who also write non-interactive speculative fiction. To Spring Open is set in a world I was only barely beginning to understand when it ended; it is probably not a coincidence that it was written in collaboration by Yoon Ha Lee. Alan DeNiro’s Solarium is another. I’d say, though, that it’s difficult for (especially) parser IF to be set in a very alien landscape, because being this uncertain about the rules of the universe would make it simply too hard for the player to act. Arguably Hadean Lands meets this challenge but does it by making the entirety of the gameplay be about learning the new rules of its universe.

Because Snake Game puts the interaction at the reading level (“which version of this event do you want to read?”) rather than the action level (“what should the protagonist do next?”), the reader doesn’t have to understand everything fully in order to proceed.

The practical result of all this — long passages of speculative fiction presented side by side, layered with mapping and music and sound effects, drawing its real-life detail from a place I don’t know well — was that I found the cognitive load pretty heavy. Within each page of text, I had a lot of work to do, constructing the character backstory and the world backstory that would make sense of the facts presented, trying to hold in my mind how that bit of story contrasted with the other passages, tracking expansions in the text. This isn’t a bad thing: some of the most worthwhile works are the ones that require concentrated attention, and I value DeNiro’s writing, say, for the way it continues to unfold on the fourth or fifth reading.

I understood certain things. The elements that suggested magic truly working in the universe were those represented by olive-green circles. Segments in the brown squares give perhaps the saddest interpretation of the protagonist’s relationship with his wife. Yellow hexagon segments contain the most detail about the tension between the traditional culture and the westernizing forces in the protagonist’s homeland. The shape of the story allows us to move back and forth freely at first, and then becomes more constrained, and then finally linear, like the snake game that it uses as its organizing metaphor.

But the author interview implies a more precise distinction between the pieces:

It contains three slightly different versions of the same story, set in different universes, different genres: it encourages the reader to slip and sidle between these neighbouring worlds and read selectively from all three versions at the same time, letting them inflect each other.

My first pass through the story, I didn’t quite get this. I certainly saw the different passages as different takes on the same events, but I didn’t read them as contrasting genres until I made an effort to do so, after encountering the interview.

I suppose I thought, rather, that the three versions represented perhaps more or less traditional, spiritual, or westernized ways of understanding a consistent set of events; that a pregnancy one worldview would consider a surprising coincidence, another might see as the result of fertility magic or a cynical fraud. And these multiple mindsets can occur in the same individual, simultaneously or at different times in life, a spiritual code-switching in response to cultural surroundings or personal stress.

I still like this interpretation, actually, even if the author seems to be saying something slightly different. Snake Game is, after all, structured so that you’re forced to switch world streams at least a couple of times while playing; you cannot read it straight through from a single perspective only. This I took to mean, among other things, that these universes were not independent of one another. At the same time, in contrast with Raik, no one universe is privileged as truth with the others marked as escape. Raik and Beneath Floes are both interesting to read alongside this, in fact. All deal with alternate tellings of events and the clash between dominant and marginalized cultures; and I wonder whether IF’s capacity for juxtaposed viewpoints makes it peculiarly suited to certain types of postcolonial writing.