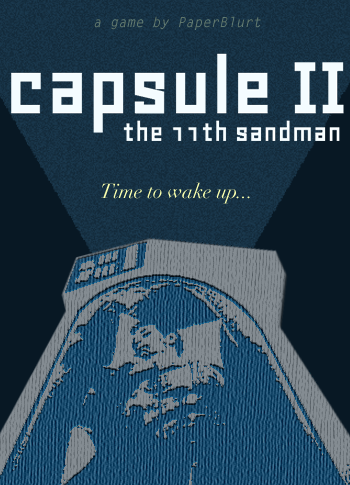 Reviewing PaperBlurt’s Capsule II is Susan Patrick, a scriptwriter for Ubisoft who hopes to create her own Twine game soon.

Capsule II: The 11th Sandman, is an interactive science-fiction/horror story by Paperblurt. It’s a browser-based Twine game that requires Internet connectivity and plays best in Chrome. It comes with a trigger warning for abuse and suicide, and I’d rank my playthrough as a PG-13 experience for some disturbing content.

Capsule II is the middle work in Paperblurt’s Capsule trilogy, and while I did not play the first one I don’t think I was missing any information critical to understanding the story. A quick recap at the beginning paints the post-apocalyptic scene: Earth has become unlivable for various reasons, and so the UNSS Makida was sent out into deep space with millions of people on board. To keep these colonists alive until they reach their destination planet, they’re kept in cryosleep… but a few watchers, called Sandmen, are awakened for a few years each to supervise the system. You play as 11, a Sandman (or possibly a Sandwoman, as your gender is never specified) who soon realizes that both the mechanical and human parts of this system are bound to fail.

The work makes clever use of its low-res graphics to portray the Console, a spaceship interface that resembles something an Apple IIe would run. 11 relies on the Console, first to wake up, then to learn about the ship and its sleeping passengers. The Console’s messages are idiosyncratic (“The oxygen levels are super amped, dude!”) but this is only the first hint of weirdness going on.

Capsule II puts you into the role of a tremendously unreliable narrator. After years of isolation, 11 goes from antagonistic and cynical to clearly insane. The most prominent evidence comes later in the game: while 11’s/your thoughts are clear, spoken words are portrayed as a jumbled letters (“Im jstu gald tot haev a freind aigan.”). The story’s format offers very few choices, and while I found this frustrating, I also felt it served to portray 11’s limitations.

The game examines classic science-fiction themes: How will people adapt to interstellar travel? How will we ration the limited resources available onboard? Capsule II certainly isn’t hard science fiction, however, for better or for worse. Some of the scientific details are clearly unrealistic. But ultimately, they are secondary to the human story being told. What 11 discovers in that tube makes the Sandman reconsider their solitude and forces them, for the first time on the voyage, to make some real decisions. This is where the second-person narrative really hits home: 11 is a narcissistic antihero and acts in consequence. You have choices, but none of them are particularly good.

Capsule II is relatively quick to play, about half an hour with a few decisions. Mechanically, there may be some bugs. Don’t hit the back button, whatever you do. I ended up repeating several years in a Console loop… though given the nature of the game, that might have been an authentic reflection of 11’s madness. I managed to uncover a small scene of Console hacking that I was never able to repeat. Bug or feature? You decide.

If you like Alien, Dead Space, or Soma, you will probably find Capsule II: The 11th Sandman to be a worthwhile diversion. It examines the concept of extreme isolation, and considers the lengths the human mind will go to in search of fulfillment. I’ll be interested to see how Paperblurt follows this up with Capsule III.