Imaginary Game Jam is an IF community project, run by Jason Dyer, in which participants first contributed reviews of imaginary, perhaps unwrite-able games — in some cases games that plainly require technology we don’t have, or belong to a universe we don’t live in. These reviews were swapped, and then people wrote… something… to correspond with an imaginary game review they’d received.

Structurally this is a bit like ShuffleComps 1 and 2, in which authors wrote games around tracks of music selected by other participants — only way weirder. Sam Ashwell’s game reviews from Tlön were an inspiration here — indeed, one of those reviews (Fire Next Time) was submitted and used in this jam. (See also Speed-IF Jacket for a shorter, less serious take on this idea; for the reason why these posts refer to “Tlön”, see Tlön, Uqbar, Orbis Tertius.)

The games created for the Imaginary Game Jam have now been released, along with the reviews that inspired them. They are fairly extraordinary.

A Game Played By Galaxies is a card-game representation of two galaxies falling into one another. I found the ruleset slightly confusing to read, and I haven’t had a chance to actually try this out, but I like the idea of modeling an interaction on a scale so far beyond ordinary human experience, as is the intent of the review:

There is no way to describe the vast and complex feelings of two galaxies as they fall into one another, each ripping the other apart and being ripped apart by the other. To us it may seem like an act of violence or sex; from the perspective of the galaxies, however, it is more accurately described as a game…

Here’s the beginning of another review:

Heads up: this is not an entry-level augury. Guss has provided the setting details and code necessary to get the game started, but you’ll need to provide your own sheep and duck. All told, the start-up costs for this title ran me over $400, in addition to the game itself. Of course, Sub Way also requires a certain familiarity with standard oracular procedure– die-casting, leaf-reading, livers, cards, and dream-interpretation all make an appearance. Anyone with at least a high-school-level of forecasting skill should be able to get to the end of the game.

Sub Way (download link), the piece that resulted from this, is a three-page document containing instructions for a game that requires the player to perform a series of daily magical rituals in order to imagine the life of a protagonist in some alternate universe (which sounds a lot like ours). Structurally it reminded me of somewhat of Harry Giles’ work, such as Funding: A Ritual, or single-player RPG storygames such as Avery McDaldno’s Brave Sparrow or Anna Anthropy’s A Wish for Something Better.

Sub Way requires either actual psychic abilities or the ability/willingness to imaginatively emulate same, as well as animal body parts most of us would be unable and unwilling to acquire (an ox skull?). But its form rather elegantly reflects content: the ruleset invites us to imagine the life and circumstances of a person in a different universe, who is using their special rites and abilities to imagine a person in ours. Elegantly written, funny, and brief; I strongly recommend it. Perhaps it would be fair to call it a short story written in the form of rules, akin to gamepoems.

More plausibly playable (though probably still very strange…) is Laura Michet’s Our Bleak-Ass Writing Competition at the Ragged Verge of Spacetime, a joint storytelling/writing game in which you and two other people pretend to be Verne, Carroll, and Poe collaborating on a story composition. You do this by speaking words on a timing dictated by the metronome, and a word is only entered into the record if the three of you all agree on it. There are some extra instructions that give the authors competing goals, too.

Several of the games in the Imaginary Game Jam do something similar: The Last Rites of Doctor Wu is a very brief Twine game that claims to be fanfic of a game based on a web-comic — postulating a whole fandom community about a fictional universe that to the best of my knowledge does not exist. (At least, searching for the name of the original web-comic, “Blameless Steel,” mainly turned up this page about legal difficulties involving the steel industry, which I think we can safely conclude is not related.)

Gaia’s Web (download link) curiously does more or less the opposite, discarding the real-world grounding material that does exist in favor of something else. The review that inspired Gaia’s Web says:

I was so pleased to see VM Straka’s Ship of Theseus adapted as a game; he’s a criminally underrated writer. S.hip of Theseus is one of the most interesting experiments I’ve seen since the House of Leaves ARG disaster, so naturally I was excited to see what the developers did. The manner of adaptation feels like an homage to its source material: the game blends traditional IF tools with new technology as you piece together the multinational conspiracy at its heart. Most notably, the game tracks your progress via drone surveillance, which is used to trigger later levels and make information assimilation more difficult. (Flooding my department was a nice touch of verisimilitude for which I applaud the anonymous designer.) 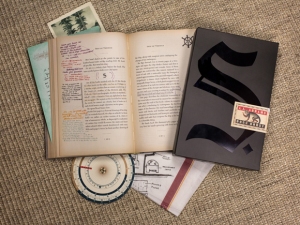 And this suggests a game adaptation of S.

, a curious book in which the main text (supposedly VM Straka’s novel Ship of Theseus) is layered over with fake marginalia and other documents such as forms, memos, and postcards, thus telling the story of two readers who swapped this volume back and forth in the library. There is some mystery to do with the author, as well. I have a copy and I keep meaning to finish and review it here sometime — if nothing else it’s a stunning piece of production.

Gaia’s Web doesn’t, at least as far as I saw, attempt any kind of adaptation of S or the underlying novel, though; instead it is entirely riffing on what’s in the review. It is also a pretty sizable and complicated piece in its own right, especially for such a short jam: a Glulx game that puts you in the position of operating this MMO/ARG crossover, deploying people to intercept players in the real world and at other times descending into their game save in order to intervene in what’s happening in their story. Whereas the original Ship of Theseus is set in the modern day, Gaia’s Web imagines an MMO with content largely drawn from Greek mythology.

Further in, the game gets more meta, in that you are testing and resolving issues in the MMO using Inform 7 testing commands that actually exist (though they’ve been reprogrammed within the game to convey scene-specific information).

In some ways this is strongly reminiscent of Baker of Shireton, though I found the experience more directed and easier to play. There was one point where I didn’t solve a puzzle in the intended way — the HEADPOP command gave me information I’m not sure I was supposed to be able to get that way, which allowed me to avoid many walkthrough commands for that section. And I found another section that involved wordplay got me stuck a few times.

There are a number of other pieces available, including a couple with procedurally generated room content and one CYOA implemented in the form of an Excel spreadsheet.

I believe the jam has another round left to come, in which the participants create responses to one another’s submissions. (It’s a rather complicated jam, this. But fascinating.)