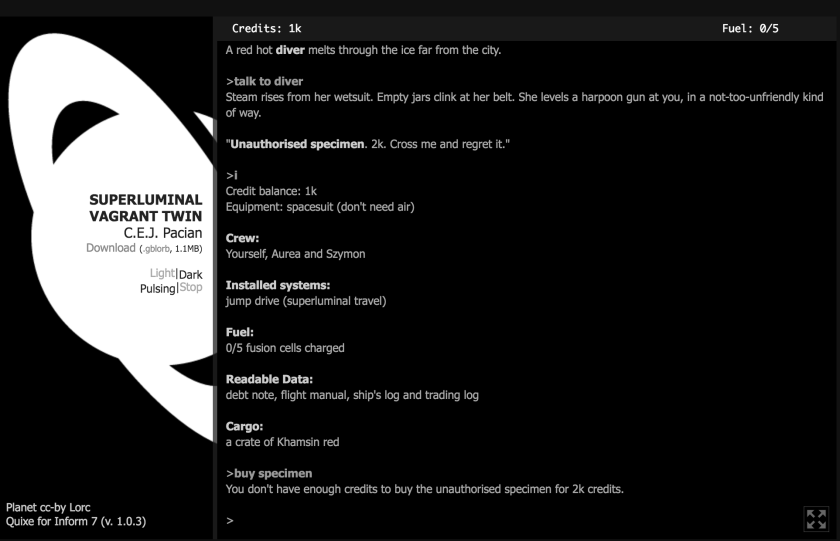 Superluminal Vagrant Twin is a new parser piece by CEJ Pacian, an exploration-and-trading adventure set in a universe of bizarre and evocative planets. The premise is that you’re trying to collect five million credits — an amount that seems frankly impossible given your initial resources — by jumping your hunk-of-junk ship from one planet to the next in search of odd jobs.

With large-scale solar system engineering, terraforming, and bioengineering, the setting reminded me a little of both Sun Dogs and Hoist Sail for the Heliopause and Home; but Pacian’s universe is populated with more characters than either of those.

Pacian’s past work includes the exploratory fantasy Weird City Interloper, the partially procedural Rogue of the Multiverse, the ant simulator Dead Like Ants, the on-rails puzzle shooter Gun Mute, and the conversation game/love story Snowbound Aces, among others.

As wildly varied as those pieces are, they tend towards a few common features: a light, focused world model that prioritizes a few verbs and sets aside the rest; characters and settings communicated in a few quick and evocative strokes; a sense of a world never completely explained.

Superluminal uses these techniques to create a fairly simple but very novice-friendly and well-directed parser experience. The verbs the player will need are all listed up front. Important nouns are in boldface, and there are rarely more than four or five to interact with in any given location. A couple of status commands keep notes on everything the player has encountered so far, which makes notetaking unnecessary; and the hyperjump premise of the story means that there is no map in the traditional sense, but that most locations are accessible within one or two moves at all times. I found that I could play in a more casual mode than I usually bring to parser IF.

Meanwhile, Superluminal does as good a job as I’ve seen at a trade-and-exploration parser game, even including a little light grinding but without becoming too dull or frustrating. Sometimes you’ll find or be able to buy objects and then need to figure out who else in the universe might be interested in paying you for them: this is complex enough to reward the player for actually reading the text, but no so complex that you’re likely to get stuck for long. And there are lots of ways to win — I completed the main plot arc without getting anywhere near 100% of the money-earning side quests. Among parser IF games with a monetary score, Superliminal offers just a bit more of a story development than in Captain Verdeterre’s Plunder, but it’s not nearly as hard to win as Gotomomi, whose much more intricate world model sometimes felt a bit overwhelming.

And while we never interact long enough with any NPCs to get to know them very well, there’s enough here about the different cultures, politics, and art styles of the various planets to make for a very entertaining playthrough.

I got through it in probably around 90 minutes of play time, but it would take longer to find every detail. Online and downloadable versions are both available.