Spring Thing 2017 is now launched, with fifteen Main Festival entries and seven Back Garden items, including Twine, ink, Inform, Quest, Texture, ALAN, and Squiffy works. I haven’t been through nearly all of them yet, of course, but here are thoughts on two: Bobby and Bonnie and Niney.

Bobby and Bonnie is a parser IF game with a couple of rabbit protagonists, illustrated with map and compass to help you follow along: 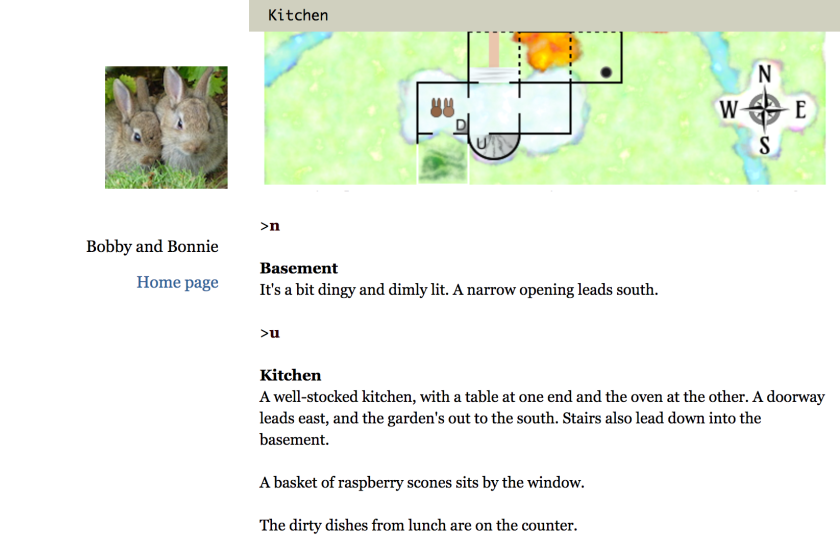 It’s a cute, lightweight puzzle game, and I don’t mean either of those adjectives in a derogatory sense. Locations have just a couple of interactive items each, and descriptions are terse, but there are still surprises, and moments when something turns out to be more than initially appeared. It’s imaginative and charming, and I didn’t run into any bugs (though I am stuck on one thing near the end, so I haven’t seen the finish yet). It slightly reminded me of Delphina’s House, for the way that solutions cross over between the real world and the world of children’s imagination.

The narrative voice also does something relatively uncommon in IF: the protagonist is a pair of characters (well, a pair of rabbits), so there’s a narrative/agent divide a bit like the one in Counterfeit Monkey. 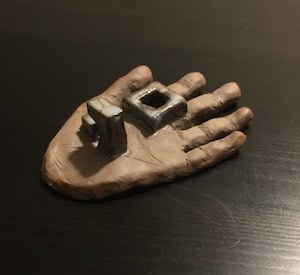 Niney is described as an experiment in parser possibilities. In it, you take on different roles for different characters, as in BE THE ONE WHO IS ADVENTUROUS FOR LUCY. [Not an actual solution in the game.]

It took me a little while to catch the hang of how this works, since the verb BE is hinted before you’ve learned about any roles you can assume for people. And once I had learned how the mechanic worked, I still didn’t always find it easy to guess, from character descriptions, what they most needed from me. Once I’d gotten past those points, though, I was pleased to see how the game riffed on its central mechanic, letting you change up the roles you can take, and generally swapping out various aspects of its metaphorical vocabulary.

At the same time — I felt a little the way I often do about parser games that let you manipulate abstractions, whether that’s in word play games in the Andrew Schultz style, or an Andrew Plotkin game like Dual Transform or Delightful Wallpaper. There’s a sense that you’re exercising a kind of agency you have nowhere else, and making the most of the parser’s affordances. But that same abstraction means that the fiction tends towards the vague or the distant as well. Niney is in one sense all about its characters, but we’re not allowed enough time or enough particularity for them to become other than types, or the protagonist-character relationship to ripen into anything deeper. A little spoiler after the space:

This becomes most pointed in the game’s main romantic interaction, where I found myself actively irritated that I could just BE THE ONE WHO IS SEDUCED at the character whose one personality note is her beauty. Most of our other interactions have been about making contact of some kind with another person, about recognizing their need and helping them, but this interaction — despite the extensive dialogue given to it in the fiction — mechanically communicates both control of the other character and dictating desire to them. Other people’s mileage may obviously vary here, but at least for me, this didn’t work in fiction the way I think the author may have intended.