May 6 is the San Francisco Bay Area IF Meetup.

May 11 is Hello Words in Nottingham, a text game writing group.

May 15-16 I will be at the Creative Coast festival in Karlshamn, Sweden, where I will speak about interactive narrative structures beyond branching narrative. Because I am out of town a lot this month, there is no Oxford/London Meetup planned for May, though I’m hoping to be able to do a tools-focused meetup in June.

The Machine Learning for Creativity workshop is accepting papers until May 16 and will be held on August 14; the speaker lineup has people who are interested in computer-aided storytelling or various forms of generative narrative.

PCG Workshop 2017 has a call for papers out; the theme is “PCG in context” and proposals are due May 22.

The British Library is running an Interactive Fiction Summer School as a weeklong course in July, with multiple instructors from a variety of different interactive narrative backgrounds. More information can be found at the British Library’s website.

The Spring Thing Festival of Interactive Fiction is live; you can play the games here, and I’ve written some thoughts on this blog and at Rock Paper Shotgun; other reviewers are starting to share thoughts on festival games.

Xalavier Nelson, who wrote Screw You, Bear Dad for IF Comp 2016, has published Ellipses RPG, a ruleset for playing collaborative narrative tabletop games without a great deal of reading up on the system; it’s available for pay-what-you-want at itch.io.

A Cock and Bull Story is a parser IF wordplay game about recognizing common sayings and phrases, and interacting accordingly; that puts it a little in the style of Puddles on the Path or certain segments of Nord and Bert. I felt like it could probably use a little more polish — there are places where objects are described twice, or where an obvious permutation of one of its idioms isn’t recognized by the game — but it’s nonetheless a fun conceit.

A couple of devs from Hungary have a Kickstarter campaign to get English translation and localization for “Saving Mikey”, a finished choose your own adventure game in the style of Lifeline. The story seems to be about guiding a young boy through a hostile landscape filled with people who are infected with a dangerous virus, and you can find out more at their Kickstarter page.

Alcyone is also on Kickstarter; it’s a sci-fi narrative game that seems to be inspired by Failbetter’s StoryNexus system of quality-based narrative. 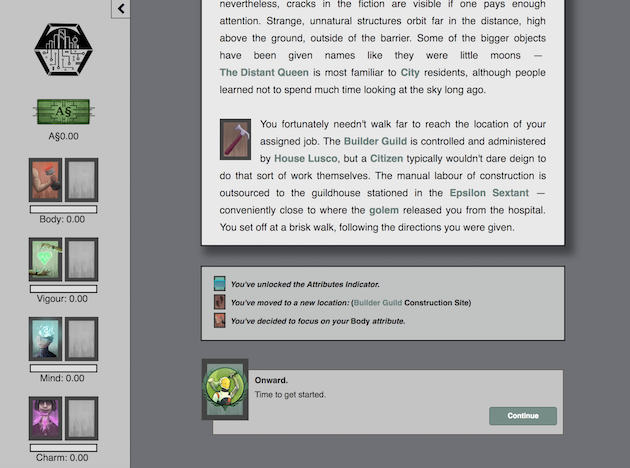 Players guide their PC as they uncover a conspiracy about the Nihility, an apocalyptic event that occurred in the past, and the City’s six ruling factions.

Neven Mrgan has released Out Line, a short piece of interactive fiction about a breakup that offers one single choice–when to end the narrative. It might remind players, at least in content, of Possibilia, an interactive film experience in which the viewer can shift the scenario around the couple’s words. 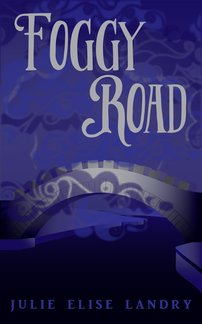 Julie Landry has released Foggy Road, a choose your own adventure story made in Twine, to tie in with the release of her novel Bless the Skies.

This interview with CM Taylor about his work in science fiction, which delves into how he sees interactive narrative and digital technologies impacting his own work.

For those interested in wordgames, Hardback’s kickstarter has launched. Hardback is the sequel to Paperback, but adds several new mechanics, which you can see detailed on their launch page.

A French literature teacher is using Inform7 to teach his students; their work can be found here and might be of significant interest to IF’s Francophone community.

Jason McIntosh has published some thoughts about IF Comp 2016 and what the outcomes mean for the 2017 edition of the competition.