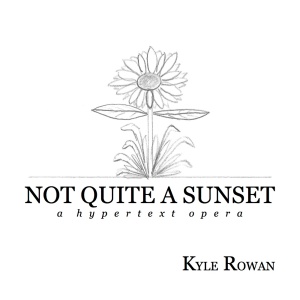 Not Quite a Sunset describes itself as a hypertext opera, a research project into allowing the player to influence how the music changes and evolves, together with the plot of a story. I had a weird time with it, and I’ll describe what that experience was, but I’m not sure the results deserve to be called an actual review.

I am not an expert in music, and post-Wagner opera I would identify as particularly a weak point of mine: I’ve seen Akhnaten in person, heard a little other Glass here and there, and that’s about it. I don’t feel equipped to comment on the form of the opera, nor about how interactivity might affect that form.

What I can say, in my musically uninformed way, is that the music in this game had a primacy that soundtracks usually do not. Individual instruments stand out. There is an articulate quality to the tune. The game’s blurb describes it as “a story with a soundtrack,” but what I experienced from it was very much not that; soundtracks fade to the back, supporting. What I experienced was a musical piece sufficiently interesting that I had a hard time concentrating simultaneously on the longish blocks of science fiction that accompany the opening.

This is especially true because that text often feels textural and not especially important from moment to moment. For example:

The dehydrated food of the first astronauts were a thing of the past, they were proudly told during training, but these meals were clearly developed to favor ease of storage and transport over flavor. It took quite a bit of creativity to alter them for personal taste, as the kitchen next door was not much more than a glorified microwave, but after a shift she was usually so hungry it didn’t matter. Ration Pack 5A/Chicken – good enough. She moved next door and placed the Pack in the food preparer.

The description goes on in this vein for a bit; and I felt, from the music that went alongside it, that I was meant to feel a chill alienation from the mechanics of this character’s life, and that her food preparation was dull and anti-aesthetic on purpose.

The first portion is instrumental — an overture, I suppose now, but at the time I thought that was all there was going to be, so despite the word “opera,” I was actually a bit surprised when a voice began singing some of the lines of the text. At that point, the text and the music start coordinating quite a bit more, with some of the lines timed to emerge only when the music reaches the right point. Dream sequences, it seems, are partially sung or spoken; waking passages, instrumental only.

So, thoughts, in no particular order.

I am impressed by the quality of the music, which seems to me to be some of the most ambitious I’ve ever heard associated with an IF piece. It really is the main point of the exercise, and admonitions like “you should play this with headphones” don’t go far enough to convey that.

I could tell that the music was responding to my actions for reasons of timing — new sections beginning when I clicked a link, often in a pretty seamless way — and that I had probably selected one of two sung passages in the first dream.

But I didn’t feel as though I was making choices that were responding to the music as music; I wasn’t choosing to hit a particular link, or hit it at a particular time, out of any desire to make something happen within the music. When I think of interactive music, I am more often thinking of something along the lines of Guitar Hero, or (much more obscurely) the layering effects in Le Reprobateur, where I’m altering performance or controlling instrument choice.

Even viewed from the interactive fiction angle rather than the interactive music angle, the player’s choices are pretty low-agency, because you’re mostly choosing in each chapter which of a few locations you’re going to visit, and otherwise hitting Continue links.

The story is less interesting to me than the music. In the first two chapters, which is what’s currently available, it’s largely about a woman on a space station waiting to find out more about a sample from the planet below. Not very much happens until late in the second chapter, and the stakes are low. She has somewhat evocative dreams, but it’s hard to tell what they mean, and her waking life would not make that great a piece of hyperfiction on its own. I think I personally would be inclined to have less text, and especially less text per screen, but aim for it to be a bit punchier and create a stronger framework for the dream passages. I can’t say for sure whether this would suit the author’s intent, however; and perhaps the dreams are meant to stand out in their vividness against the comparatively grey daily life that she experiences.

The layering of text and music worked best for me during the passages with sung lyrics, because then the text came out fairly slowly, and what was printed provided extra context for singing that might otherwise have felt a bit cryptic.

Anyway. All that said, there’s obviously a huge amount of work and craft that went into the operatic aspect of this, and I really admire that. I’m not quite sure that its pacing of text or its choice of textual content is doing as much to support the music as it deserves — and I think the work probably should be approached from that direction, of “how does the text support the opera?” rather than “how does the music support the story?”