Tonight (June 20), the London IF meetup is going to play In Case of Emergency, a game delivered mostly through the format of physical props.

The prospect of this has me thinking again about narrative told through objects, a topic I sometimes come back to here: everything from the work of the Mysterious Package Company through to the story-in-a-suitcase designed by Rob Sherman.

Infocom, of course, had its tradition of “feelies,” part copy-protection device and part souvenir, distributed with games: these consisted of printed manuals, letters, evidence dossiers, coins, pills, letters, and whatever else they could think of. Wishbringer came with a plastic glow-in-the-dark “stone” which represented the eponymous magic object of the game, and let me tell you that when you are eight years old a glowing plastic rock is pretty special. Jimmy Maher frequently mentions them in his Digital Antiquarian writeups on these games. For a while in the 90s there was a tradition of sending people feelies as a reward if they registered shareware interactive fiction, but shareware also died out as a way of distributing IF.

This captured my imagination, and for Savoir-Faire, I made a limited feelie run just for people who pre-ordered via rec.*.int-fiction:

It consisted of some supposedly historical documents and some modern ones: 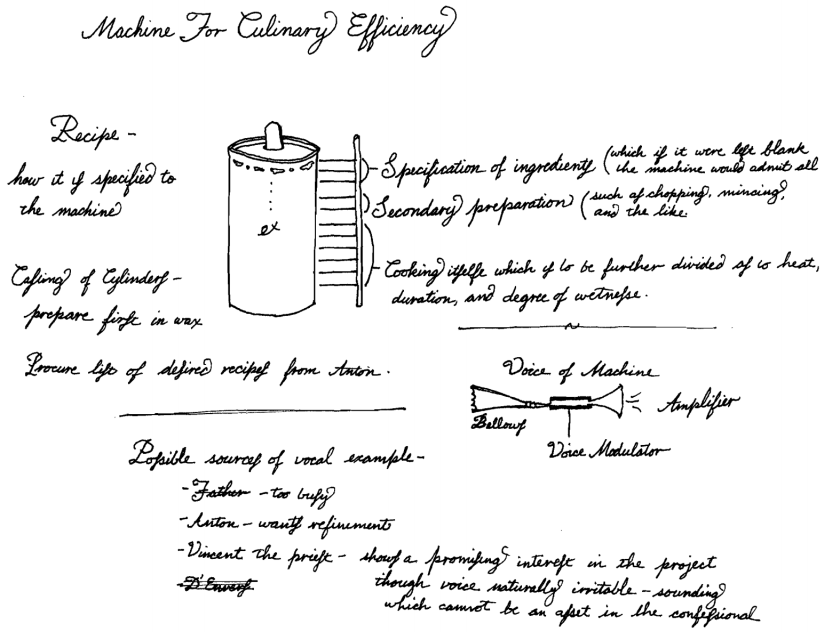 By the standards of, say, Punchdrunk, these weren’t impressive objects (you can see a scan of the full set in this PDF), but given my skills and abilities at the time, they were the best I could do. The pamphlet was based on some reprints I’d found of little etiquette manuals from the late 18th and early 19th century. The letter was handwritten with a fountain pen that I bought for the purpose — an expensive investment given my grad student poverty — and I tried to school myself in contemporary handwriting styles, though as you can see, I am not destined for a career in forgery any time soon.

As for the machinery design, for the very earliest purchasers, that was written on actual period paper that I bought from an online ephemera reseller, and I’ve always felt slightly bad that I tainted real 18th century paper, a limited resource no doubt salvaged from some antique desk drawer, with my very much 21st-century scribbling. (Later on, I handwrote on more boring paper, and later still I digitized and printed the thing with a suitable font.)

The drawings were not very uniform, either. I had the notion that the note scrap ought to look weathered, and I experimented with tearing and even burning the edges of the paper, but some of these effects looked better than others, and eventually I stopped fooling with them. Also, of course, if you are not a trained draftsperson and you make a dozen or more copies of the same freehand picture, it’s likely to come out pretty different from one to the next. (As you can see, the two examples pictured above are not the same at all.) Even the wording of the letter tended to vary slightly as I thought better of different cases.

For City of Secrets, I did a similar thing but on a more ambitious scale. The game had been commissioned and initially intended as a semi-commercial release, and I wanted to deliver some of that experience to the community, even if I couldn’t exactly duplicate the full effect.

And that meant not only coming up with a manila envelope’s worth of doodads (as I had with Savoir-Faire), but a whole packaging solution:

The whole business, from the cardboard boxes to the printing to the CDs, ran me about $700, which I did not recoup (or expect to recoup) from what I charged for copies. It was basically Kickstarter reward fulfillment before Kickstarter existed.

Some of the tasks that went into this:

Getting a CD burner that worked, and software that would toast successfully; fretting over the ruined CDs, when I didn’t have that many to spare. The inside cover of the CD box contains the same passage of the Odyssey that I much later used as the basis of Endure.

Designing, planning, and ordering the maps, for which I had to send in a CMYK Photoshop file, only I didn’t have professional-grade Photoshop, so I had to get a favor from a good friend to make it for me. I also had to teach myself about options in digital printing; fortunately for me, Indigo presses were the new hotness at the time, which meant that you could get short runs of glossy color printing for (relatively) cheap.

Designing the train ticket and using scrapbooking craft scissors to cut the shaped corners, as well as a scrapbooking punch to punch out the used destinations. Designing the postage stamp for mailing the tourist brochure, and using (different) craft scissors to cut faux-perforation stamp borders into it, and then some rubber stamps to put a cancellation mark over the whole thing.

Making the boxes — I couldn’t afford professionally printed full color box art, with their high minimum order numbers and expensive prototyping. So for those I got standard white cardboard boxes and printed off a large sticker that I wrapped around them. Less good, but again, the best I could manage in the circumstances.

Buying black, white, and gold satin and velvet remnants, and sitting on the floor of my living room with my sister, my perennial partner in crime, hand-stitching each of the little pouches. There are loads of places online to buy favor bags, usually intended for weddings, but the ones I could afford I felt looked wrong, and the ones that looked right were out of budget. Each one needed to be adorned with white and/or black satin ribbon (and again, not every one is identical) and a punched oval label; and inside, a tiny plastic ziplock of magic powder.

The powder was the item into which I put the least expense, effort, or consideration of the whole business. My father had a bottle of expired Chinese five-spice that he wasn’t using any more. I doled it out among all the recipients. It looked and smelled interesting, and wasn’t toxic, which satisfied my ambitions for that item.

For a while, I was also working on a project that was, for lack of a better term, feelie-led. At the time, Black Phoenix Alchemy Lab was producing a series of perfumes called Carnaval Noir. (I don’t think this is even still available.) It included evocatively named scents like Bed of Nails, Kunstkammer, and Medicine Show.

So I dreamed up a game based on these locations: the protagonist is a circus performer with the ability to enter a deep trance at will, and she has done so in order to fool someone who was trying to murder her that she was actually dead. When she awakes — on the bed of nails — she has to figure out what led up to this point. I had the idea that I would finish this game and distribute it in a limited edition with samples of each of the perfumes. Projected audience size, maybe about five people? But it was fun to work on. I didn’t finish due to the impracticalities of the project and how much else I had going on. I do still really like the idea of a game whose textual descriptions would be underscored by particular scents, though.

I wasn’t alone in the feelie-obsession. A few of us started up a quixotic project, feelies.org, to distribute feelies for a variety of amateur IF games. The games themselves remained freeware, but if you wanted an associated gadget, booklet, map, or pack of photographs, you’d go to feelies.org and place the order. Some others in the community helped build the website and hook up the ecommerce aspect. But the orders would come to me, then I’d get your items out of my closet and mail them to you, because I was running fulfillment on this operation. In some cases, I fabricated the objects on demand.

We offered a range of things: feelies for Losing Your Grip, Fallacy of Dawn, Necrotic Drift, Arrival, and a few others. In some cases, we were essentially reprinting feelies that had been designed for shareware-era games. But when we were doing something new, working with other authors to come up with suitable feelies for their game world was also a lot of fun.

For a while, ambitiously, I assembled a bunch of paper and ink samples so that prospective feelie-makers could look at a sampler set and get an idea of what they could use for their own feelies. I bought more stamps and craft scissors, nominally for the greater good, but largely because I wanted them. I haunted websites that resold ephemera; one of these, the bizarre Manto Fev, still exists, and if you want a vintage Bingo card or a postcard from Ohio ca 1943, now you know where to look.

I was not as swift about sending things out as I should have been, sometimes, because it turned out to be more of a pain than I’d expected to have to go to Kinko’s and the post office on random unpredictable days. I wasn’t charging anything for fulfillment, because the whole thing was meant to be a community exercise, but of course the buyers had spent the cost of purchase and reasonably expected their feelies to show up in at least vaguely the same time period as if they’d ordered anything else online. People were for the most part patient with this; a few sent me salty email about it.

Then we moved some of the things we were doing to automatic fulfilment (for instance, CafePress or Zazzle for posters or printed work). But the feeling of doing this wasn’t quite the same, because a one-off promotional object is not nearly as entertaining as a dossier of differently sized, shaped, and colored items painting a rich picture of a particular world.

Eventually, the guilt about struggling to keep on top of this project outweighed the guilt of closing up shop, and I did so.

Obviously, all of that activity was very impractical; the closest I’ve come in quite a while was putting together a custom copy of San Tilapian Studies as an IF Comp prize. And I’m well aware that the recipients probably did not feel as strongly about the feelies they received as I felt about making them.

But I also look back on that activity a little wistfully. One, I like doing complicated projects and figuring out the logistics of something I’ve not done before. And I like paper crafts, even if I’m not very good at them. I rarely have any real excuse. (Ridiculously ambitious Christmas present wrappings, sometimes. That’s once a year though.)

And two, there was something about feeling a level of personal connection with my players: that I had made this game, and the accompanying things, specifically for them, like baking a cake.

Also on this website: a bunch of probably-now-outdated advice about how to create feelies, how to make maps and hire artists and all the rest of it.

5 thoughts on “feelies.org and other odd recollections”