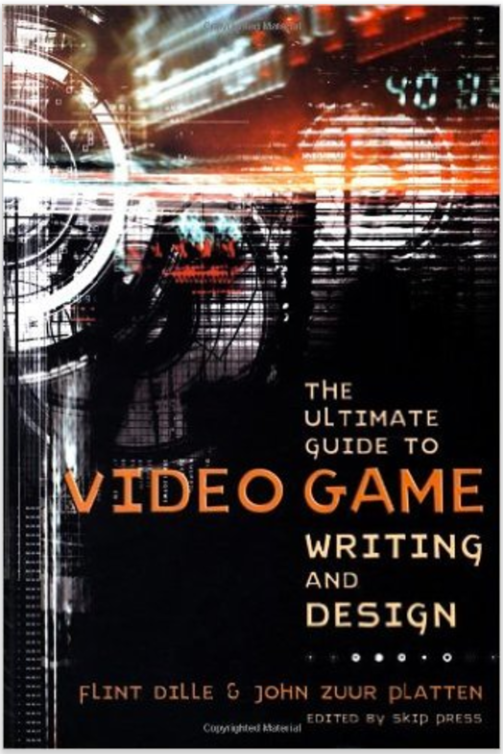 The Ultimate Guide to Video Game Writing and Design (Flint Dille and John Zuur Platten). This one is a few years old — first printing 2007, it looks like — but it’s still selling healthily on Amazon. Dille and Platten are pragmatic about what they do: commercial work for which they’re hired and which require a number of soft skills beyond simply being able to write. In the introduction, they describe themselves as craftsmen rather than artists — a point about which I actually have some sympathy — and a good bit of the book consists of introducing the essential facts about how video games are made. (Or were made in 2007, at any rate. But there’s a lot here that’s still true.)

In contrast with Skolnick’s book, Dille and Platten dive right in to narrative structure questions in an early chapter: they talk about “limited branching” and “critical path” structures that would correspond with gauntlet or friendly-gauntlet structures; “funneling narrative” which is essentially branch-and-bottleneck; and “open-ended,” which seems to mean “a story in which the designer hasn’t really planned for CYOA structure at all and the result is a time cave or an unfinishable mess.” They also include “nodal” stories where short stories or quests are organized around in-game locations.

In other places, they’re (like Skolnick) providing standard writing advice you’d find in any how-to-write-a-novel guide, translated into game contexts: the need for (and types of) conflict, establishing and raising stakes; the gameplay version of “show don’t tell,” which is “play don’t show”. In fact it probably pairs pretty well with Skolnick’s book; each covers a slightly different part of this arena.

From there, much of the rest of the book is about process: processes that support concept development, processes of communication, processes of getting hired and getting paid.

Several chapters of the middle of their book basically consist of templates: character templates, organizational templates, resource and reward templates, charts to fill out about the relationships between characters, and a lot more. Do you know your character’s purpose in the story? In the gameplay? His aspirations, addictions, occupation, and objective? His desires, loves, fears, roles, and skills? The emotions he expresses most often? His boss’ name, his nationality, his signature tic, his favorite food, his accent and dress style? Birthplace, locations visited previously, probable place of death? Hair color, eye color, hairline, facial hair, height, weight, body type, health level, tattoos and body modifications? How did this character lose his virginity? (Believe it or not, I’m leaving out a large number of items on this character template. If you want the full list, you’ll have to get your own copy of the book.)

This takes a lot of material that’s probably good to know and turns it into a checklist. Whether that’s a good or a bad thing probably depends on who you are as a writer and just exactly how you’re turning work out. If you’re doing 8-12 projects a year — as the authors of this book are — then having a streamlined approach to getting started probably is indeed pretty important.

And — also to be fair — they do acknowledge that you should focus on what’s relevant to gameplay, and that their sample template might not be the right one for every game. Though my template doesn’t match theirs (for some text-based games, I haven’t really bothered to work out the eye color of every character), I definitely do do exercises sometimes where I systematically list things about each character that anchor those characters more firmly with respect to the story. For Counterfeit Monkey, it was about how each character related to the resistance/conformity axis and how they dealt with the oppressive culture they lived in. For an upcoming Choice of Games project, it’s about what each side character most wants and most fears — and how the player’s actions might bring those outcomes about.

Figuring out what questions to ask for any given game or mechanic is probably actually the real art here; one of the conveniences of working in a series or mature brand is that it’s often clear what the distinguishing features are going to be for that work.

On the career side, Dille and Platten are freelancers, and they have solid advice to offer about how to do this: what is expected from the writer, what you need to deliver, what to write into your contract, when to start chasing an invoice, how to cope with criticism like a grownup. What to do when a client insists on a script change that you think is actively a bad idea. How to get yourself back into the headspace of a project when that’s proving hard. There are a lot of solid suggestions here.

The book does embrace wholeheartedly a certain games culture that isn’t my favorite. A number of their examples very much assume your basic square-jawed hero-who-shoots as a desirable character — indeed this bit probably tells you a good deal about where the authors are coming from:

When you play James Bond in a game, you’re presumably playing someone you would want to be. What heterosexual male wouldn’t want to be James Bond? In some cases, however, the player plays a character that is wildly different than he or she, like a guy playing Lara Croft. In that case, there’s a different relationship with the character. Lara is a girl; the player is a guy. Okay, so there’s something great about being able to control a woman (no man can hope to do that in real life!).

…and this constitutes about a third of what they have to say about the rich and nuanced field of player-protagonist relationships.