This was originally just going to be a post about IntroComp — I wrote it up a little while ago and scheduled it. But the post as originally written now feels slightly tone-deaf; I’m feeling a bit emotionally drained and stressed by the past week in American politics, and I know a lot of my friends are too. So if you’re in a similar place:

If you could use something warm and fuzzy to play right now:

If you need something smart and funny:

If you need something visceral about trauma and survival:

If you need something about the long game of politics and the role of women:

We are coming up — very soon! — on IFComp 2018, the competition that has been running for more than twenty years and usually sees the majority of hobbyist interactive fiction for the year. (There is still time to donate money or prizes to IFComp, if you wish.) If you’re London-based, you might also like to join the meetup October 6 where we will play some of the games together. According to yearly tradition, we’ll focus most on games contributed by members of the meetup, but if there’s time we’ll try some other games as well.

But IF Comp is not here quite yet, and you might be interested first in a couple of the submissions to IntroComp 2018. IntroComp is an also-long-running competition that invites participants to submit portions of unfinished games, seeking feedback.

An Unexpected Visitor describes itself as”Les Miserables meets War of the Worlds.” It’s not kidding: the game features Jean Valjean as a character from the first page. Notably, it’s audio-rich: there’s a narrator who reads the story aloud, and an accompanying sound track.

In contrast with some read-aloud IF, it feels as though this game was created for this kind of presentation; the sentences are meant for reading. The reader performs them with gusto, too. I got a little bit of a hiss sometimes from the audio — I think it could probably use a little cleaning up — but it was definitely on the more compelling end among audio IF stories I’ve experienced.

The text is also available on the page, but it feels like a second-class citizen to the voice acting — though you do have to read it to find and select options. I was enjoying the rest of the presentation enough that I kind of wished I could sit back and just listen, without also trying to read at the same time (or at intervals when the audio stopped). Some audio interactive work uses voice commands from the player, and I’m not necessarily suggesting that that is required here — speech to text is an additional layer of tech, and it doesn’t always work flawlessly if not tuned for the project. But perhaps something that indicated the options in audio and then responded to a keypress? 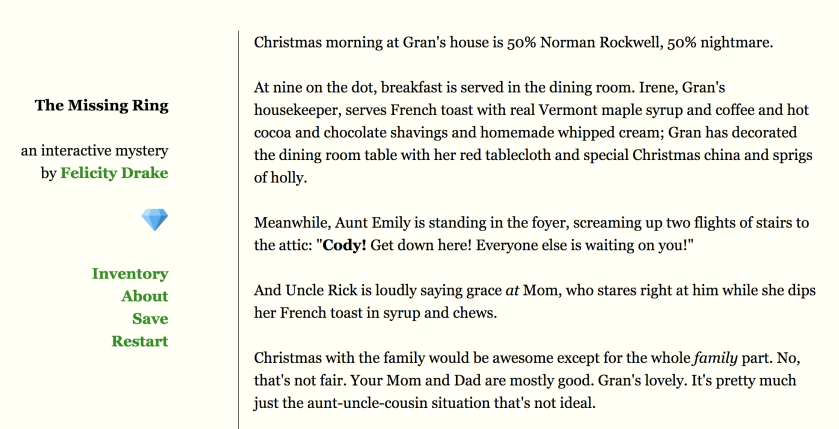 The Missing Ring, a cozy holiday-season mystery in Twine: it’s Christmas at your grandmother’s house, and her heirloom ring has gone missing. (I can’t really consider this a spoiler given that the premise is right there in the title.)

The Missing Ring reminded me a little of a few other games set in family homes — Delphina’s House, or Domestic Elementalism — with a touch of Teenage Sleuth a la Bell Park. It’s well written at a young adult book level — simple but engaging prose, characters who feel like they’ve been observed from a real family, but nothing too adult for, say, a sixth grade reader. There are one or two Harriet the Spy moments where the protagonist crosses the boundaries of what’s really appropriate for her to be investigating, and the text acknowledges this, too. (I’d be interested to see whether the finished piece gives the protagonist much character development around this point. But it feels like it’s going to.)

The piece follows a couple of Twine conventions I particularly like: there’s inventory tracking, and links that are going to expand descriptions in place are in a different color from links that are going to move the story forward. The emoji image in the sidebar also provides a little reminder of just where you are in the story. In fact, it’s sufficiently polished that I was slightly surprised to hit the end of what was implemented — I’d half forgotten that this was an IntroComp game, and was playing it in earnest.

One thought on “IF for certain moods, and a couple of IntroComp games”