The Oxford/London IF Meetup does not meet in December, due to everyone being busy this time of year.

January 5 is the next event from the SF Bay IF Meetup: 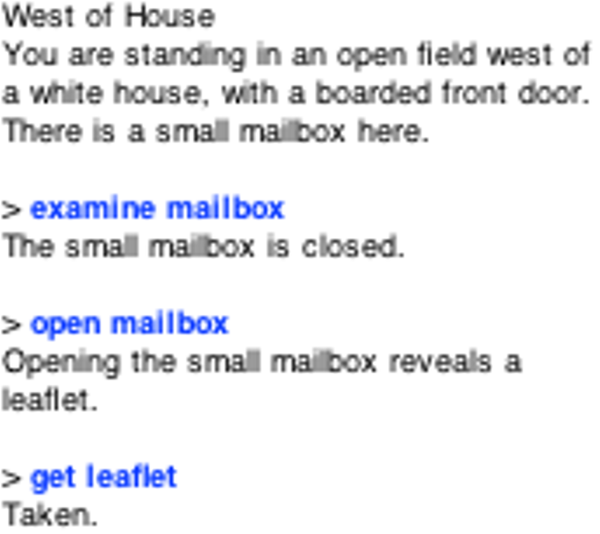 You are playing an unusual form of interactive entertainment. A COMPUTER is here, displaying mostly text. In accordance with tradition, the text is written in the SECOND PERSO…

Check out this Meetup Group →

February 8-9 there will be a two-day conference Beyond the Console: Gender and Narrative Games. The conference is being organized by The Centre for Research in Digital Storymaking at London South Bank University and cohosted by the Oxford and London IF Meetup.

The first day, Friday, February 8, will take place at the Victoria & Albert Museum. The V&A is also currently running the exhibition Videogames: Design/Play until February 24.  I will be chairing Friday’s event and giving the introduction, and the evening will feature a keynote game by Porpentine, and the exhibition.

Saturday, February 9‘s event will shift to London South Bank University, featuring panels on gender, identity, indies and industry.  Hannah Wood will give the keynote and a drinks reception will follow.  For more information about the conference, please click here.

This has been mentioned elsewhere, but Cragne Manor is now out — a massive text adventure tribute to Michael Gentry’s Anchorhead (1998). Anchorhead is a much-loved favorite in the IF canon. The tribute, with one room each from more than eighty authors, is rather less tonally consistent than the original, but is thoroughly awesome and worth checking out. (Disclaimer: I wrote a room early in the game.) I’ve written about this here, and there is also a longer form review from Carl Muckenhoupt.

Steven Wingate has just released Love at Elevation, a 325,000-word interactive romance novel set against the backdrop of the majestic mountain town of Boulder, Colorado.  The game is text-based and available through Choice of Games.

Modus Games and Sketchbook Games have partnered to develop the upcoming text-centric platformer Lost Words: Beyond the Page.  Written by Rhianna Pratchett, the work is set between the pages of a diary and a fantasy land, and players interact with words to solve puzzles.  It’s currently available for pre-order, and is expected in early 2019.

Stefano Gualeni has released Here, which in the words of the designers “challenges its players to engage with- (and be puzzled by-) the philosophical notion of indexicality. More specifically, it poses the question of what it means when the word ‘here’ is used in a computer game… Or, rather, of how many meanings of ‘here’ can co-exist in a computer world.”  (Disclaimer: I contributed to the project in the form of voicing one of the characters.)  You can check out the new game, well… here.

Also recommended: Jon Ingold’s talk on how to edit and improve dialogue in a game that you’re writing. He delivered this at AdventureX in 2018.

Mythaxis is seeking IF to include in its upcoming February 2019 issue; however, it does not pay.