These are some slides and text based on the talk I gave at the British Library’s Off the Page: Chapter Two event on April 13. I was invited to speak about works of mine that make use of classical sources. It’s relatively rare that I get to give a talk actually about classics (even in the context of games) and I jumped at it. 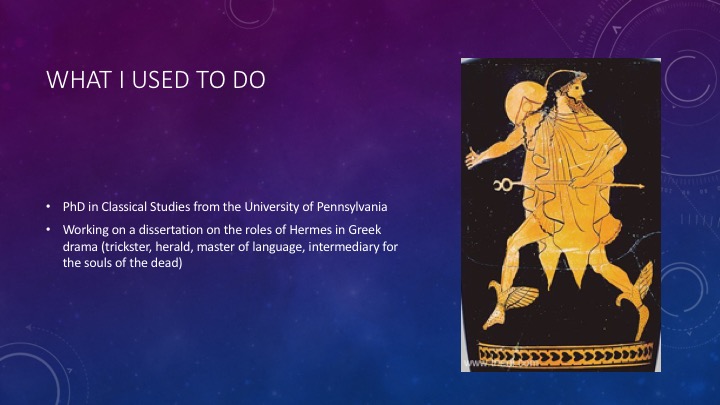 What I’m talking about today connects those two points, because I’m going to be discussing three games I wrote that drew on classical poetry, history, and mythology. (I didn’t pitch it this way in the room, but this is partly a talk on classical reception, the field that looks at how work from the ancient world is recast by later authors, artists, playwrights and propagandists.)

I’ll start with the most recent, Endure.

Calling it a game might be a bit of a stretch, so we might call it an art piece or just an interactive experience of some kind. Endure looks like this:

This is a passage from just after Odysseus has returned home, after being away for twenty years, to discover that his house is full of suitors who are wooing his wife. It’s too dangerous for him to go in and announce who he is, and no one recognizes him after all this time anyway, so he is hanging around at his own doorstep, disguised as a beggar, trying to decide what to do next.

So he tells himself, be strong; you’ve been through worse, back when you were captured by the Cyclops and he ate many of your men before you were able to figure out a cunning way to escape.

This resonated with me when I read it, and it still means a lot to me; there was a period when I had it printed off and stuck to the wall of my living room, when I was going through a difficult time. To me it represents how we can take positive strength from past trauma .

(At this point I ran a video of Endure playing through several different ways of translating the text.)

Endure lets the player explore the text using different translation strategies to uncover the meaning of the Greek. So they’re partly constructing their own preferred translation and emphasis, deciding how often to place jokes.

There’s also a subtler point I was trying to capture about what it’s like to read a text as a student or non-native speaker when you might only recognize some of the words and need to look up others. The first words you translate in Endure establish some themes, so if you translate phrases about the Cyclops first, you establish a Cyclops-themed viewpoint on the text and other phrases about Odysseus and his men are translated more unsympathetically. But if you start with Odysseus’ trait of cleverness, the reading of other phrases shifts to emphasize Odysseus in that way.

The second piece I’m going to talk about is more evidently a game, one that you can direct towards good or bad outcomes: 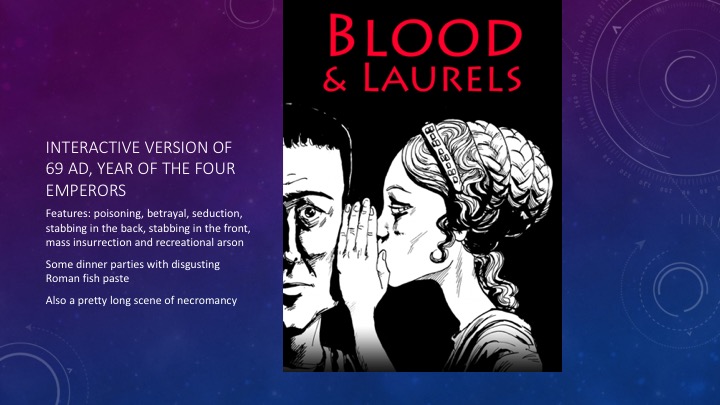 …and if you don’t know what necromancy is, that’s when you consult an oracle that is supposed to put you in touch with dead spirits in order to get your questions answered about the present or future. 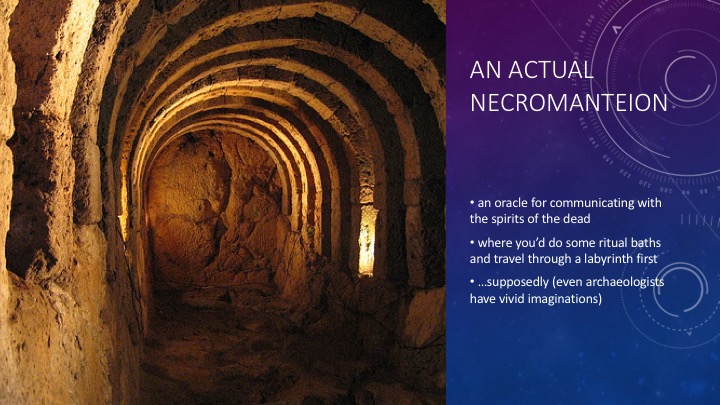 …though in fact there’s also decent evidence that this space was actually a grain warehouse and was never used for theatrical consultations of the dead. Besides that, even if authentic, the supposed necromanteion would at best represent Greek, not Roman, religious practices, and from a different era than the one I was representing in Blood & Laurels.

But it gave me a hook that I really liked: the protagonist of Blood & Laurels is sent by his politically connected master, an army general, to ask whether the general’s coup might succeed against the current emperor. If the player asks the general whether he even believes in messages from the dead, the general says he does not — but that this is a way of assaying whether the temple and religious organization would take his side.

So the protagonist goes to the consultation, and has an encounter there that alarms him — the voice of a deceased previous emperor who says that he, the protagonist, is the one who will come to power. The priestesses of the necromanteion seem confused and alarmed by the message, which it appears they didn’t orchestrate. And the player is left to decide what to do with this information. Tell his boss the truth, and risk being seen as disloyal? Lie? Pursue political power for himself, or try to protect others?

Blood and Laurels is of course no longer available to play, for reasons to do with the app store (among other things). (This prompted a bit of tweeting during the talk about the need for better digital archiving, a point I entirely agree with.)

And finally, here’s a piece where I was working with a myth rather than a text or a historical period; this is also the oldest of the things I’m talking about here, the first game that I released to the public back in 2000.

(Here I took the viewers through the opening of Galatea and explained the premise, a conversation with a character who claimed to have been brought to life from a marble statue, but was being displayed in an AI exhibit.) 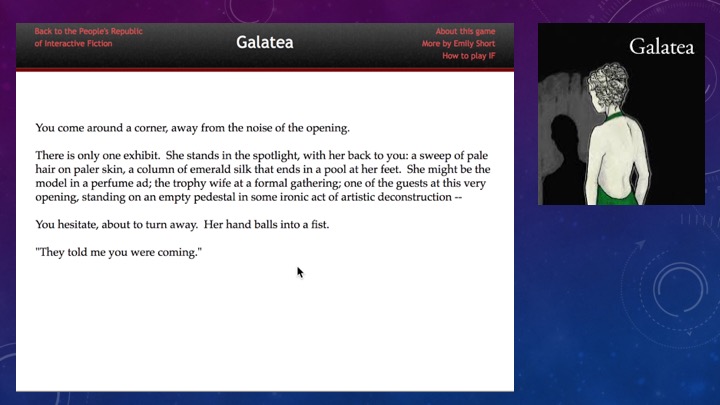 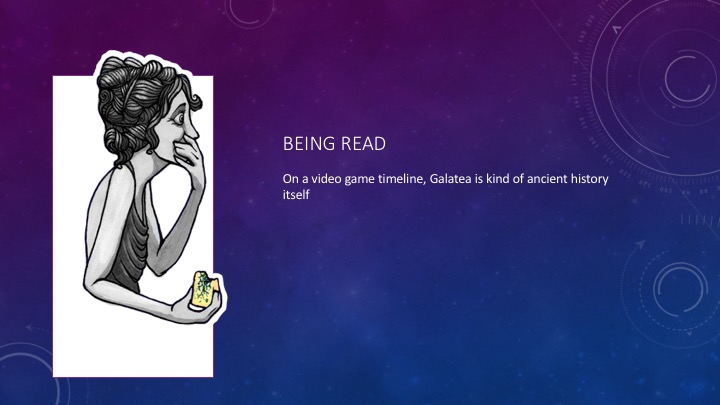 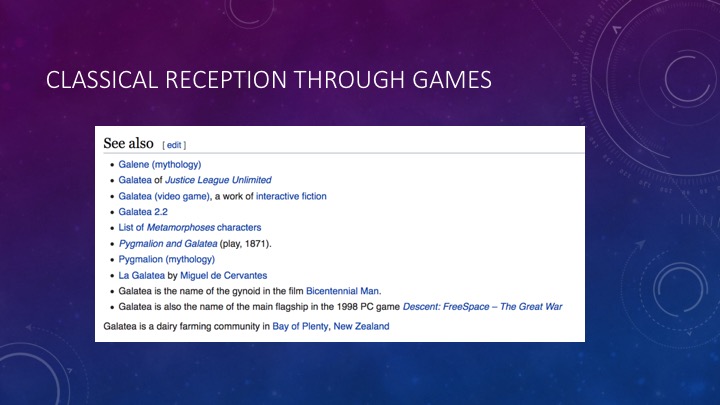 So because I’ve been given the keynote slot, I was tempted to make a couple of more sweeping statements that you may feel where not fully supported by the talk I just gave. But here goes. 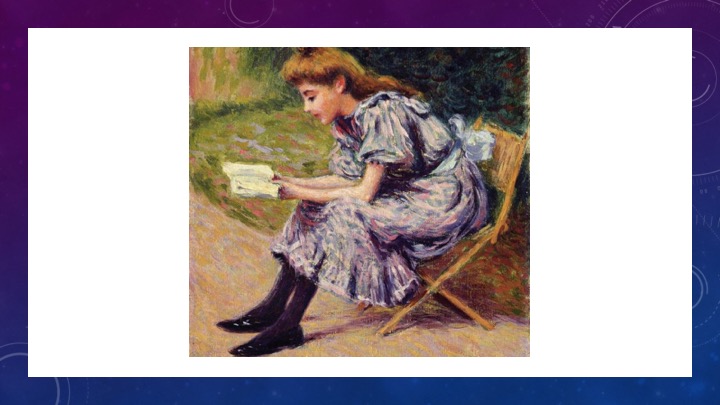 Reading is a creative act. We aren’t just passively absorbing information as we encounter it. Back when I was still teaching classics students, I sometimes had undergrads who would ask me, what is the point of working on this material when it has been studied so much already? There’s already centuries of scholarship.

What I would say is that when we engage with this material, we’re building a bridge from the present to the past. And while the past may be fixed in place, the present is not. We need to build this bridge over and over again if we want to gain access to that material.

So that leaves the question, why engage via games? Games as a craft offer us the opportunity to think and write about systems and structures: 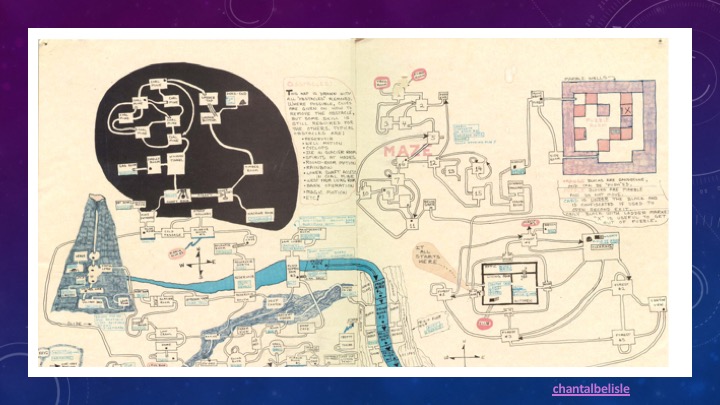 …and about what is possible in a particular imagined universe. They also invite the player to bring her own meaning into the story and make it part of the fabric of the experience.