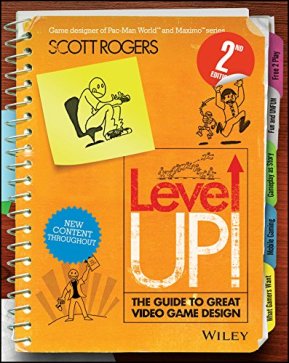 Level Up! is a book about game design and mechanics for would-be practitioners rather than academics. It’s by no means the only such book out there, but it enjoys pretty excellent reviews and has been recommended to me by a couple of designers I respect.

This won’t be quite a standard review, though, because I’m coming to the book with a particular question in mind. Namely: most of the game writing and narrative design books I’ve reviewed on this website have been somewhat or (in some cases) completely lacking in any discussion of how game mechanics interact with story.

So I’m curious: do I find more about the mechanics aspect of narrative design if I start with a book that’s explicitly into the mechanics? And even if Level Up! doesn’t talk about story-related mechanics as such, can I find general principles of mechanics design that also apply in the story space? For my friends who ask about learning more about the story-mechanics interface, can I point them at this book?

Well, hm. There’s plenty to like: it’s cheery, it’s written in an informal and pleasant style, there are cute drawings on the pages. The book does cover a few realities of writing in video games, like the fact that writers are often brought in late on a project (though less so these days) and that voice directing a cut scene is a job in itself, and quite a few other related points.

There are, moreover, some good passages about gameplay mechanics that have particular storytelling effects. Rogers talks about how important it is to hold the NPC Yorda’s hand in Ico, and how effectively that forms a bond; about how Team Fortress 2 makes character personalities key to their behavior; about how a character’s weapons and inventory can help sell the story of who they are.

His analysis of level design, breaking level types down into “alleys” (constrained, often mostly linear experiences) and “islands” (open areas in which the player is free to explore) also corresponds pretty well with standard tricks for mapping story to a geography in parser IF and elsewhere.

At the same time, Rogers absolutely sees story as a bolt-on to the game, not the substance of the game itself — “Remember to never mistake story for gameplay and similarly never mistake gameplay for story.” (48, during a chapter about the story.) He spends a fair amount of the narrative-focused chapters on things like dealing with IP owners, or coming up with a good game title, or deciding when to use a cut-scene (for “kissing and blowing things up”, if you’re curious). The section on character gives quite a lot of time to the specifics of 2D or 3D platformer design and on using the protagonist’s body size as a defining metric for the rest of the game world. There’s way more about different types of jump than there about character arcs. There’s a whole chapter on cameras that neatly explains various cinematography conventions and game-camera conventions.

So. Why am I sad? This wasn’t bad! And some of the mechanical reflections were indeed story-relevant. I don’t think it’s done the heavy lifting work on narrative+mechanics that I keep hoping to see, though. And while it provides a vocabulary of game mechanic elements, it’s often focused on the surface manifestation of these: on heights of jump and types of gun, on punches versus kicks, on the distinction between a double tap and a timed tap on a controller button.

3 thoughts on “Level Up! The Guide to Great Video Game Design (Scott Rogers)”