Forgetting is an interactive graphical story by Singaporean artist and author Troy Chin, and was exhibited at the Singapore ArtScience Museum as part of a show that ran concurrently with ICIDS this year (more about ICIDS in a future blog post or two).

Forgetting concerns a man who keeps experiencing amnesiac episodes, as well as memories of a relationship with a woman named Julia. It starts out with the hoary “amnesia in a non-descript location” trope, but it soon moves beyond that as the protagonist returns to full memory and starts trying to piece together what’s really going on. The Singapore setting isn’t the main point of the story, but it’s manifest in a number of subtle ways, from the details of the protagonist’s job to his comments on the changing nightlife.

As Chin explained during an introduction to his work, Forgetting is meant to feel linear. Clicking on different panels in a strip, or on different objects in some of the more location-based scenes, can lead to different outcomes, but the system does nothing to indicate that you’ve made a choice, or to tell you where or what the other options are. It’s only at the end, when you are told which ending you reached, that there’s any kind of tracking acknowledgement. Reaching new endings unlocks additional clips of information; conceivably, there may be some grand reward for reaching all of them, as in many visual novels.

I haven’t managed to get that far yet, though, because despite trying to play as thoroughly as I could and going through the story seven or eight times, I’ve only found three conclusions and I haven’t been able to work out what else I could be exploring; and there’s no way of bookmarking or going backward in the story or (a la visual novels) fast-forwarding through already-seen bits, so a complete run-through takes a little while. Ultimately, that’s left me a little dissatisfied: I would like to have gotten far enough to piece together the mystery, whereas all I’ve got at the moment is some hints. I think that might be the experience the author intends — he’s gone to some lengths to conceal the mechanical underpinnings of this work — but it leaves me itching for more information.

Still, this is worth a look. There are moments of exploration, where you’re examining objects in a space and then getting multiple comic panels of exposition about those objects, that felt somewhere on the spectrum between graphical adventure and parser IF. I’d also be curious to know if anyone else gets further than I did. (My endings were Bliss, Instinct, and Cleansed, fwiw.)

Microdot Reimagined is a parser IF game for sale from Potassium Frog. The starting premise is that your brain has been colonized (sort of) by a professor from the recently destroyed alternate-universe land of Microdot. He needs you to help him reimagine the place in order to bring it back into being, which means exploring a lot of spaces and solving some puzzles.

Stylistically, this is IF of the old school. Microdot Reimagined is executed in Inform 7 and playable with Glulx, and it’s got some nice tweaks, such as stylesheet improvements and cover art. In respect of gameplay, though, it retains the aesthetics of 90s or even 80s IF. There’s a short bit of narrative introduction, but the story such as it is does not seem overly pressing during at least the first part of the game. The map starts with lots and lots (and lots) of rooms accessible at the outset, and a variety of objects to collect from different rooms. I’ve played enough IF that I’m usually able to hold a layout of several dozen rooms in my head, especially if those rooms are introduced (as they usually are in modern IF) in clusters rather than all at once. So I almost never make maps any more. Microdot Reimagined, though, was big enough and thematically varied enough that as I wandered around all its opening space, I soon began to regret not taking notes.

The jokes are wacky-satirical — sort of Douglas Adams lite. Here’s a sample, which will probably give you a pretty good idea of whether the sense of humor matches yours:

>x magazine
It’s Celebrity ROFL Magazine! This is just so amazing. I cannot understand why anyone would not want to feature in this fabulous celebrity catalogue of doom. Let’s take a look at the epic stories in this week’s issue:

Plus there’s a sixteen page photo spread on the Monks of Ecstatic Gloom and their new swimming pool. This is so awesome!

I confess I got stuck after about 60-80 minutes of play, which is one reason this isn’t a full-scale review; but as far as I saw, the puzzles were mostly of a get-X, use-X style, except that the items in question were widely spread all over the map, so this was still nontrivial.

Enrico Colombini — one of the early greats of Italian text adventures — has released a short book about how to create an ebook with puzzles, given that the ebook’s only state is the page number and puzzles often require tracking some variable state.

This is a very specific purpose, but the explanations are clear and detailed, and may be relevant to anyone who is planning such a project. Another approach, of course, might be to use inklewriter’s Kindle conversion software, but that’s only useful if you are using exactly the right platforms; Colombini’s advice applies more broadly. It is published in both English and Italian, and comes with a short sample of a puzzle — a wolf/goat/cabbage cross the river puzzle — executed in ebook form.

Strip ‘Em All is an interactive comic strip puzzle, in which the player can reorder frames of the strip and sometimes alter the content of specific frames. Any change you make in one puzzle frame can have ramifications for the rest of the strip, as well. The puzzles ramp up in difficulty very quickly, and I found some of the later ones very difficult indeed. In several cases it’s not really obvious what order two panels need to follow because the dialogue really makes sense either way; in some, a complex series of panel changes and strip rearrangement is required.

This may sound reminiscent of Dan Benmergui’s Storyteller, but in practice it’s quite different: the text of speech bubbles is written out in advance, and the storylines are much more specific. Where Storyteller is backed by a generalized engine for working out the possible meanings of juxtaposed symbols, Strip ‘Em All is really about hand-rolled puzzles with one right answer.

That said, one of the interesting aspects of this puzzle is that it’s about exploring the interior space of the characters and the way they think as much as it’s about plot events and actions. Often one can hover over characters’ heads in order to see additional thought bubbles, which may be functionally hints about what is really going on. Sometimes a character changes states of consciousness, and all the panels change too as a result. So while I think it could have been better hinted, I found this fairly interesting.

One word of warning: the page includes quite a few ads.

Finally, a couple of interesting things to read: Jon Ingold gives a good interview in Haywire magazine on text gaming and in particular Sorcery!, and Liza Daly recommends some of her favorite interactive fiction from the last year. 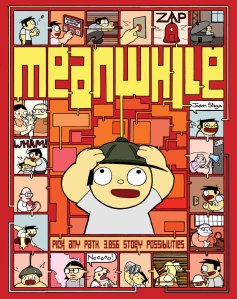 has been around in book form for a while now. There’s even a copy in my household, but I haven’t ever gotten to the point of reading it properly (and there is a “properly”, as one soon discovers). Now, thanks to Andrew Plotkin, it’s available as an iPad/iPhone application, and in that new format I finally finished it last night.

Meanwhile is a puzzle story: there are many endings, but you’ll know when you’ve reached the point where you finally understand. Structurally it has more in common with Möbius, Rematch, or other replay-puzzle IF than it has with, say, the Choice Of series. Going through the choices with the right knowledge puts a new spin on the things you see, and equips you for a couple of combination lock puzzles that otherwise would be laborious to guess your way through. And — like many games of this ilk — it uses time travel and parallel universe tropes to explain its loops of repetition and discovery, so that you can if you wish rationalize all your playthroughs as belonging to one(ish) reality.

Meanwhile is self-graphing CYOA — you don’t just jump pages, you actually see the lines of narrative — and it plays with that fact frequently and intentionally. Embedded in the story are many witty moments: places where you find yourself stuck in an infinite loop, points where two paths reconverge for comic effect, panels that mirror or summarize other panels in surprising ways. Sometimes the lines connecting panels spiral or tangle or knot, indicating narrative complication or a breakdown of causality.

As a book, it’s a pretty cool artifact — lines running out from the comic panels to the edge of the page, leading to tabs leading to new pages.

As an iPad app, it’s more solvable. All the elements of the story are assembled on a single infinite canvas, making it easier to see how panels relate to one another. A trace records where you’ve been on the current playthrough, so you can easily jump backwards to the last choice or to an earlier segment of the story if you want to try taking a different route. There’s even voiceover functionality for the visually-impaired, though I didn’t experiment with this myself.

If you’re inclined to read Meanwhile, I highly recommend the app version. The crazy, mindboggling outcome is worth getting to — and worth getting to honestly — and it’s easier to do that with those helps.