You Can’t See Any Such Thing is a curious parser work that riffs off standard parser behavior; the opening explains that it is the descendant of a previous game that the author used as part of a gallery show.

The interface is enhanced with fancy typography and elements such as photographs you can mouse over to expand: an unusual degree of elaboration, given that this is Inform under the surface. 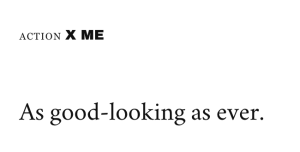 (Certain library responses are familiar, and if you delve into the source, there’s a telling Release/play.html URL for the playable content. If, however, you type VERSION to verify this, your command vanishes silently into ether, unacknowledged. Asking about the machine producing this text is apparently forbidden, which is consistent with its themes and aesthetic intent [even if also a bit of a license violation].)

[Edited to add: Juhana Leinonen remarks that it is using a Vorple interface.]

The piece focuses on the way that the parser experience lets you control different sensory approaches to a scene. It’s as overt as possible about the interactive elements — interactive nouns are in bold; verbs are specified and particular verbs go with particular rooms.

The writing is literary, and the interaction is about exploring rather than about solving a puzzle or causing certain actions to occur in the plot. Though we are allowed to LOOK, SMELL, TOUCH, and so on, we are still readers rather than actors, and our reading function is reinforced by the narrator’s manner of clarifying things, and by responses to parser errors.

When I played, I was immediately drawn northward, to the Widow’s perspective, and was immediately satisfied with lavish descriptions of perfume notes and a Proustian trip into her girlhood recollections.

In another room, the room for examining, each examination carries the player over to another location, in deepening vistas reminiscent of Lime Ergot.