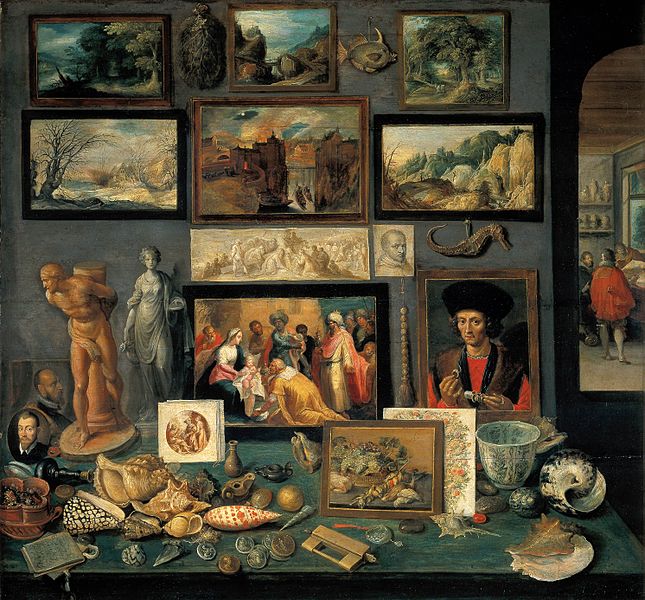 Typically a shryng, or altar, was set up in the home with commemorative articles from lost family members. Typical articles were a scrap of clothing, a lock of hair, an amulet, or a favorite razor. Pictures of loved ones were rare and treasured, brought out only on these occasions… For ancestors about whom little was known, Tre-manners used a custom they called “Ricing the Soup.” The unknown relation was given attributes common to all of humanity but in such a way as to make him or her sound individual. In this way the thin back-story of the ancestor’s memory was thickened. — Eli Brown, Excerpt from the forthcoming The Feasts of Tre-Mang

The Feasts of Tre-Mang is a cookbook with real recipes from a fake cuisine and a fake history. “Pamatala Jad-zum”, or “Storm Chowder Pie”, is a seaweed-laden dish served traditionally in memory of those lost at sea, appropriate to the memorial services of the Tre-manners described above.

This interview with the author reveals an enthusiastic love of world-building for its own sake. In addition to the context-rich recipes, he has also created currency, propaganda posters, and a flag for Tre-Mang. Even though the book isn’t finished yet, the concept has already poked through into the real world in the form of a Tre-Mang evening at a local restaurant.

A History of the Future in 100 Objects is a project by Adrian Hon of SixToStart, imagining the world to come by highlighting specific items that might be invented or imagined in the future. His project is mostly to take the form of images and essays, but he has promised his Kickstarter funders a few physical rewards, including a newspaper of the future (which tells us, I suppose, that he envisions a future that includes paper-based news) and several 3D modeled objects.

Retropolis is a world envisioned by Bradley W. Schenck, built up around art and images, though the website does also feature some branching CYOA-style fiction. Even in the stories, there’s a feelies-rich delight in physicality, however: inventory items are pictured and have their own descriptions, encouraging the reader to take some time off from the narrative progression to check out the tokens that come with it. Retropolis takes the “do art for free, make your money on t-shirts” concept to the maximum, allowing you to buy everything from clocks to blank journals with Retropolis designs on the cover — it’s the most obviously merchandising approach of these three — but they include tourist postcards and similar objects that are meant to “belong” to their world of origin rather than to our world.

What category do these projects belong to? It’s storytelling of a kind, but a kind that appeals to the non-fiction-reading part of the mind, to the fans of mockumentaries and ARGs, to armchair travelers who might read Atlas of Remote Islands

. Adrian Hon’s project is explicitly modeled after an object-based documentary by the BBC, A History of the World in 100 Objects. Indeed, it’s possible to go the other direction and make real-world objects into the subject of fiction, as Motel of the Mysteries

But the form in question here is not just “fiction taking the form of non-fiction”. What strikes me is that all of these take a game-like approach to information, their reliance on setting and world background as well as — or in place of — plot. They invite the player-reader to explore and assemble pieces of meaning, perhaps like the Dennis Wheatley “crime dossiers” that ZUrlocker has covered recently for the IF community; or like the puzzleless landscape or exhibit IF written for the IF Art Show. Or, perhaps, like 1893, which has puzzles and a plot woven in, but exists mostly for the sake of the explorable world.

The responsiveness of objects is part of what entrances me about textual IF, and is found there perhaps more than in any other type of game. I don’t mean physical simulation. Physics engines abound in which you can throw barrels and explode crates and stack this and that, and IF will never compete in that arena with games like Portal or Half-Life 2.

What I mean is that the objects in IF tend to be more accessible as artifacts, and artifacts with narrative significance. Subject to the author’s willingness to write descriptions, you can pick up IF objects, smell them, taste them, get the heft of them; you can examine them and learn things about them that aren’t necessarily visually obvious; you can ask other characters about them. They carry — or at least can carry — evidence of the cultures and individuals they belong to, suggesting a wealth of information never explicitly spelled out. [1]

IF tends not to be populated with dozens of the same thing (crates, beer bottles, weighted companion cubes) but with hand-crafted individual objects. It’s a kind of world that could only exist in text because it simplifies a real world environment tremendously — the average IF room, if found in reality with only the objects described, would be eerily empty. But the few objects we do get to see and interact with are freighted with that much more meaning.

CYOA-style stories often block this kind of engagement with things (though, e.g., Echo Bazaar writers tend to explicitly aim to include evocative detail). AAA games often devolve into a necessary same-ness, with lovingly crafted objects and animations that nonetheless, for budgetary reasons, have to appear many times throughout the world. (Then, too, the gameplay of movement and shooting doesn’t always encourage parsing one’s environment with an eye for a few narratively telling details. There’s too much to do finding exits and cover.)

So IF, at least for me, is often about an archaeological kind of pleasure: the pleasure of exploring artifacts and drawing conclusions about the fictional world. And since the gameplay is also typically about the process of exploring artifacts and drawing conclusions about what can be done [2] — the affordances that will allow puzzle solving — there can be a certain aesthetic harmony to that experience.

1] Graham Nelson’s article “Object Relations” in the IF Theory Reader goes into the narrative possibilities of objects at some length, especially tying these back into descriptive passages in literary fiction.

2] On the topic of interpreting the story world, see Andrew Plotkin’s excellent essay “Characterizing, If Not Defining, Interactive Fiction”, also in the IF Theory Reader.

3] Here is a somewhat related post on the aesthetic pleasure of a good description from back in 2007, about Andrew Plotkin’s Dreamhold and the casual game Chocolatier.

5 thoughts on “Wunderkammer: The Fiction of Physical Things”