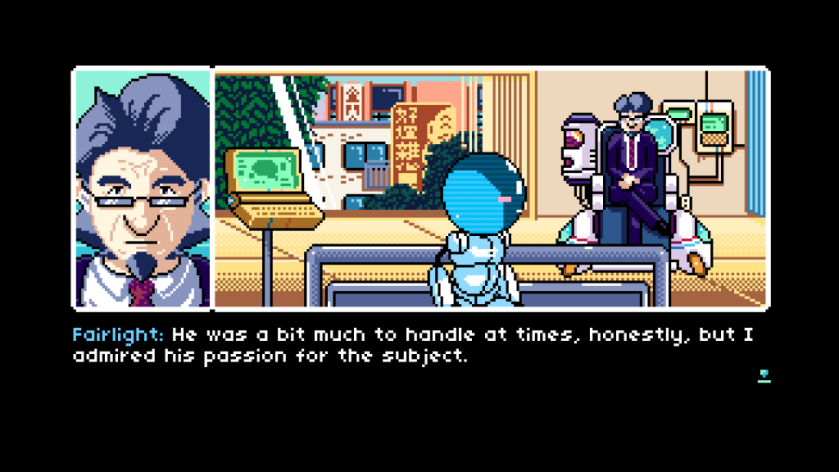 Read Only Memories is a point-and-click graphical adventure set in “Neo-San Francisco”, in a cyberpunk future full of personal assistant robots; implants that let you experience VR right through your own head-hardware; and massive amounts of genetic engineering. Both the increasingly intelligent robots and “hybrid” humans (those with significant amounts of non-human DNA) are struggling for their rights, while the corporations have largely taken over the responsibilities of government. You are investigating the disappearance of an old friend who is at the forefront of the robotic research.

Thematically, this gives ROM some analogies with which to talk about queer issues and ableism. Nonetheless, the authors have given considerable thought to the world-building of their alternative universe, enough so that the issues of ROM aren’t just trivially-disguised representations of current real world problems. I am sometimes disappointed in works where the fiction is no more than a thin translucent skin over a completely unreconstructed political statement of one kind or another: in that case, why tell a story at all, I wonder? But ROM dodges that.

It also benefits from a cast that is diverse without that diversity defining who the characters are. An important NPC uses an assistive chair, but though that fact plays into his motivations, it is by no means the dominant feature of his character, for instance.

Finally, a lot of the individual dialogue has considerable charm, and the puzzles are mostly pretty accessible without being boring. I did get stuck a few times, and at the end I went to YouTube walkthroughs for guidance, but that was more to do with having limited time to invest in the game than a lack of trust in its design. If I had had more room in my schedule to devote to playing, I am reasonably confident that I could eventually have finished it on my own.

That said, I ultimately enjoyed ROM slightly less than I’d hoped, for a couple of reasons. First, it could really use an edit. The dialogue is long-winded, and there is a lot of it. I found I was a little more patient with this if I started to think about it as partly a visual novel rather than a point and click adventure – that put me in a little bit more of a mindset for its pacing and its long digressions. Even so, though, I think it would have benefited from some trimming.

(This is not a thing unique to ROM. In my experience, most writing benefits from constraints that prevent the author from using as many words as she would like. Obviously there is some point beyond which that’s no longer true, but in general, having to narrow down the most critical things you want to communicate makes for punchier dialogue and stronger scenes.)

There was also just a lot of text to read in a blocky pixelated font. Fifteen years ago I used to be incredulous when IF players complained about an author’s choice of font and color: surely no reading configuration could make that big a difference? But with my increasingly middle-aged eyes, I’m here to tell you that, yeah, the wrong choice of font and contrast can totally mean I spend the entire game in mild discomfort.

The plot could also have been tighter. The investigations in the midgame involve quite a number of fetch quests and similar NPC-satisfying tasks, enough so that the narrative structure starts to get lost and I found myself thinking of the game as a string of missions rather than as a story with a distinctive shape. The same could, of course, be said of many other pieces, but looking back over the plot, I’m hard-pressed to think of many specific moments of high tension or great plot significance in the midgame. There are such moments in the beginning and at the very end, but the middle is comparatively structureless.

Then, too, some of the specific tasks feel very much motivated by graphic-adventure rules. Stuff like: this character demands specific object X to proceed! so even though you live in a huge city where you could in theory order pretty much whatever you need, and even though we’ve just established that you have a financial backer who can meet your monetary needs, you still have to negotiate for the exact single copy of the required item that is guarded by a growly NPC.

Finally, the actual events involve some very familiar tropes and some very commonly used twists. I would have liked to be more surprised by the surprises.

So the net effect of all that was that I enjoyed the world-building and a lot of the moment-to-moment character interactions, I wasn’t quite as impressed by the story as a whole.

Disclosure: I played a free copy of this work as a result of encountering it through the IGF.

4 thoughts on “Read Only Memories (MidBoss)”