Bring Out Your Dead is a jam I ran for defunct WIPs, over the week around summer solstice. It is now complete, and you can see the 89 entries. Not all of these are interactive fiction: being on itch meant that the jam attracted a number of not-even-slightly IF projects, from a hexagonal Tetris variant to a bullet-hell shoot-em-up to Conflux, a 3D puzzle game about getting the right perspective on your environment.

Providing any kind of coverage of all 89 works is more than I can do, but I did want to look at a few concept trend over the next few days, starting with experiments in storytelling interface.

Interactive Comics Prototype (Carl Muckenhoupt) is an interactive comic where changes in one panel instantly propagate forward to later panels. That means it’s possible to explore a Time Cave-structured story extensively without moving on from a single page.

What would this look like for a longer structure? I could imagine each strip being itself a node in a larger tree; I could also imagine a game where you’re actually working your way backwards, trying to open up earlier panels so that you could exercise greater and greater agency, in the style of 18 Rooms to Home. I would definitely play more of something like this.

The Flashpaper War is a piece by Andrew Plotkin, in which you proceed by removing, altering, or swapping words in the text in order to change what happens in the story. The premise involves characters who travel from one fictional universe to another, tweaking pieces of the story that aren’t currently working properly.

Some of the word-manipulation features reminded me of Texture and its capacities; or of Mark Backler’s The Last Word, a still-in-development 2D platformer where words have physical effect. The Flashpaper War is a bit less poetic than these, though — there’s lots of uninteractive text and just a bit of interactive text. Mixed feelings about that, and about the sense that the characters in Flashpaper are getting to do more entertaining things than the player is. But there’s evident life in the interface concept.

Symple Home Renovations (rocketnia) has a navigable world model — rooms, doors you can open, etc. — plus a facing page where object descriptions appear. Over the course of the game, you can select one of those tabs to read everything that’s happened to or been done by a particular character, so for instance the You tab contains all your past actions and your personal description. It’s also somewhat unusual among BOYD pieces in that there’s a full (if rather odd) story here: I was able to get all the way to an ending.

I failed to find the author’s commentary initially, so was a bit bewildered. I found the proliferation of tabs more confusing than helpful, as a rule, though perhaps that went along with the general sense that the story was getting slightly beyond my control. The demo does suggest, though, a world model that is separately tracking the texts associated with different in-game entities, and that’s potentially interesting. (Perhaps in some of the same territory as Curveship?)

[ETA, having seen the commentary: if the idea is to provide a consistent scrollback/review for each object, I wonder whether it would make sense to offer that as a non-persistent feature, rather than a set of tabs that seem to be demanding attention all the time. I was really unsure where to direct my attention initially.] 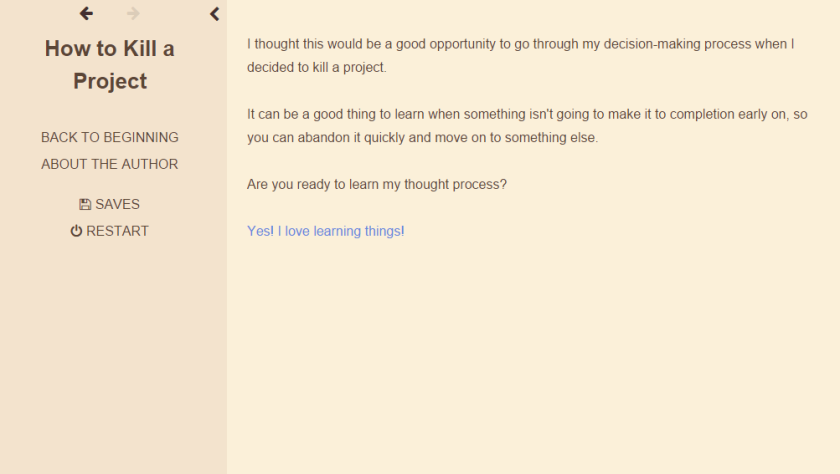 How to Kill a Project (Wertle) is itself a Twine game, but one designed to document a variety of unfinished endeavors, including an entirely-haptic game, a game using a laser and eye-tracker, and various other pieces. There are links out to videos and other documentation, too — it’s an intriguing look at a range of alt-controller possibilities, and also at the author’s experiences around creative projects.

I include it under interface because it’s both experimenting a little with how Twine itself can be used in a documentary capacity, and because a lot of the games documented involve unusual ways of interacting.

6 thoughts on “Bring Out Your Dead: Interface”