In this installment of my monthly writing-books review, I’m looking at a few different guides to worldbuilding. Several of these were designed for science fiction and fantasy novel authors, not for games writers, but some are useful in this territory as well.

Kobold Guide to Worldbuilding is indeed written by and for game designers — though sometimes about tabletop RPG design rather than video game design. Still, the tabletop context is relevant to video games.

As anthologized guides go, it’s more varied and less systematic than some. Some sections are essentially post mortems on past projects that might or might not prove particularly relevant to your own process. Others go into detail about the many different sub-flavors of heroic fantasy.

At some points, the contributors are even philosophically at odds. Contributor Monte Cook argues that game world design is fundamentally different from novel world design because you’re looking for enough setting material to drive dozens or hundreds of stories, not just to support a single one. (“…for an RPG, Middle-Earth doesn’t need Sauron; it needs five or six, all in different locales with different motives and goals…”) Later in the book, Wolfgang Baur disagrees, accusing Cook of Kitchen Sink Design.

Quite a lot of the content here is about why you need world-building — what it can accomplish, and how it contributes to genre and the generation of story possibilities — than the how. Steve Winter’s chapter even gets into the question of why monotheism isn’t a popular choice for RPG backgrounds even when so much of the rest is often loosely western medieval.

But there are how chapters as well. Jonathan Roberts makes a pitch for the value of a good map, but then also takes us through an illustrated step-by-step process for layering in geographical features, biomes, nations and smaller landmarks. Other chapters cover , topics as specific as “How to Design a Guild” and “Designing Mystery Cults.”

World-building: A writer’s guide to constructing star systems and life-supporting planets. (Stephen L Gillett) I’ve got a soft spot for this one because I used it to come up with a lot of the features of the planet in Floatpoint. But it’s very specifically focused on how to make up hard SF environments that could really exist — what sizes of planet, in what configurations, could reasonably be colonized or used for human-like habitation? Which, barring quite specific needs, is usually not the kind of world-building required for games, and especially not the type of world-building question one asks to build out a mechanic.

Worldbuilding from the Inside Out, Janeen Ippolito. More or less the opposite of Gillett’s book, Ippolito’s starts with the aspects of culture that are going to be closest to characters’ hearts. What are their religions, ethics, and deeply held beliefs? Cultural practices, rituals of adulthood, styles of naming, gender roles, methods of dealing with death and the dead? And so on. The book amounts chiefly to a list of questions to ask about your world, with some fairly general notes on each; but in some cases this might provide a useful prompt. A few categories of question about medicine and warfare are relegated to the back of the book, for what feels like no very strong reason: they’re not categorically different from the questions asked earlier. 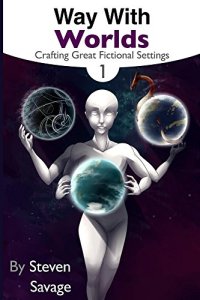 Way with Worlds: Crafting Great Fictional Settings, Steven Savage. This book is the first in a seven-part series, and I didn’t have the stamina to check out all seven. The latter books in the series focus in on particular topics of interest, though, while this first book is looking more at the general topic. Savage argues for a setting-centric approach to writing in general: your world is your true main character, he says, and that sets you free to visit lots of different stories in that shared context. Individual characters may be lenses on the world, each with a limited set of perceptions and ways of understanding.

He also takes this process extremely seriously: “…if you claim to be a worldbuilder and fail, it’s an ethical lapse as well as a creative one.” This may be more pressure than the casual reader is really looking for. He takes this in two directions, though. According to Savage, a worldbuilder needs to do a good job on establishing rules and delivering coherency. But he also addresses the “if you claim…” part of the equation by pointing out how you can communicate whether your project is going to be worldbuilding-rich in the first place.

Finally, a sort of dishonorable mention. When I was a teenager, I read a lot of Orson Scott Card — not just his novels and short stories, but the per-story post mortems he often included in his anthologies and the long-form books on writing. More than anyone, he is probably responsible for that aspect of how I approach my own craft: not only creating, but examining the creative process and teaching it where I can.

How to Write Science Fiction and Fantasy influenced me quite a lot at the time. It probably still has some merits, but in the intervening years, Card and I have both changed a good bit (or at least, I’ve changed, and his public persona has changed). These days, his attitude towards various topics in general, and towards queer and trans people in particular, makes me disinclined to recommend his work for purchase. I did learn a lot from him, but I can’t support him these days.

Still. The legacy is there.

6 thoughts on “Books on Worldbuilding”